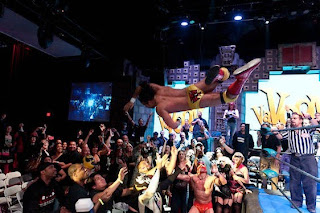 
Lucha VaVoom "Cinco in July!" @ The Mayan (Downtown)
Were you totally bummed when you didn't get tickets for Lucha VaVoom's sold-out Cinco de Mayo show? Well, you're not the only one, so the organization decided to meet the public's demand for another Cinco show tonight. Take advantage of this second chance to get your fill of Mexican-style lucha libre wrestling, traditional burlesque and comedic commentary because they won't be back for a while. No other event mixes sex and violence quite as well.


Surfer Blood, Terraplane Sun @ Santa Monica Pier (Santa Monica)
The 29th annual Twilight Concert Series returns to the pier for a kick-off show featuring the Florida foursome of Surfer Blood, who just released their sophomore effort, Pythons. Also performing is local band, Terraplane Sun, and their single "Get Me Golden" couldn't be a more apt song to usher in the pier's free summer series that takes place every Thursday, from 7 p.m.-10 p.m., through Sept. 12.


OC Fair @ Orange County Fair & Event Center (Costa Mesa)
Like most children, the county fair was always a highlight of my summers growing up, so the OC Fair will always hold a special place in my heart. Aside from the carnival games, rides and wacky food concoctions to sample, I loved checking out who was awarded the blue ribbon for best jam or quilt out of the many artists, farmers and craftspeople who enter the various competitions. As I got older, the concerts at Pacific Amphitheatre became the fair's big attraction. This year's lineup includes Colbie Caillat, Weezer, Flaming Lips, ZZ Top and Roger Daltrey.


In Theaters This Week
Fruitvale Station is one of my most anticipated films of the season. It tells the true story of Oscar Grant (Michael B. Jordan) and the tragedy of his experiences on New Year's Eve 2008 in the Bay Area, and also stars Octavia Spencer and Melonie Diaz; Adam Sandler, Kevin James, Chris Rock and David Spade reunite for Grown Ups 2; I am a Guillermo del Toro fan beyond words, yet I'm not sure if all the giant robot battles of Pacific Rim are for me. However, the fact that it stars Charlie Hunnam and Rinko Kikuchi could persuade me to check it out. Also in theaters: Bhaag Milkha Bhaag; Crystal Fairy & The Magical Cactus; The Hot Flashes; The Hunt; Pawn Shop Chronicles; Still Mine; V/H/S/2

Old Pasadena Film Festival
The free film series returns to Old Pas through July 27. Tonight's programming includes Woody Allen's gorgeous 2011 time-travel romp, Midnight in Paris, starring Owen Wilson as a screenwriter who gets to hang out with the likes of F. Scott Fitzgerald, Ernest Hemingway and Gertrude Stein every evening at the stroke of midnight. It screens at 8 p.m. at Distant Lands (20 S. Raymond Ave.), while Fantastic Mr. Fox plays at 8:30 p.m. in the One Colorado Courtyard (41 Hugus Alley). The 2009 stop-motion animated fantasy-comedy from Wes Anderson features the voices of George Clooney, Meryl Streep, Bill Murray and Jason Schwartzman, and is based on the classic by Roald Dahl.


Grease Sing-A-Long @ Hollywood Bowl (Hollywood)
The Bowl once again transforms into the world's largest movie theater for the family-friendly tradition, which coincides with the film's 35th anniversary. Hosted by Didi Conn ("Frenchy"), the pre-show features a performance by Sha Na Na followed by a screening of the film, complete with subtitles so that everyone can sing along with the lyrics to each song. From "Summer Nights" to "Greased Lightnin'" and "You're the One That I Want," the entire night is sure to be a blast.

Edgar Wright Double Feature @ Exposition Park (South Los Angeles)
In anticipation of Edgar Wright's Aug. 23 release of The World's End, Street Food Cinema presents an evening dedicated to the director's other works with Nick Frost and Simon Pegg. Up first is a performance from local band Fallen Riviera, then make sure to get a bunch of munchies from trucks like Mercedes Binge, Rollin' Rib BBQ and Ta Bom before settling in for the screenings of Shaun of the Dead and Hot Fuzz.


Cash'd Out @ Saint Rocke (Hermosa Beach)
If you're a fan of Johnny Cash and have yet to check out the SoCal treasure known as Cash'd Out, then here's your chance. Vocalist Douglas Benson sounds just like Cash as he belts out the Man in Black's hit songs, but the entire band's musical prowess and showmanship pushes their performances from mere tributes to capturing the energy and spirit that is associated with the legend. You don't just have to take my word for it, members from Cash's inner circle from W.S. Holland to Loy Robin and even Cindy Cash have all endorsed Cash'd Out. So head out to the South Bay, and see them for yourself.


Bastille Day @ Bouchon (Beverly Hills)
If you're a Francophile like me, then you know that today is French National Day, otherwise known as Bastille Day, commemorating the storming of the Bastille in 1789. While France celebrates with parades and fireworks, Thomas Keller and Co. pay tribute to the event with a special day at Bouchon, featuring $2 oysters, grilled treats, wine and cocktails, live music and a screening of Baz Luhrnmann's 2001 musical Moulin Rouge in the Beverly-Canon Gardens, part of their ongoing Sunday Movie Nights series.


Mayer Hawthorne @ The Troubadour (West Hollywood)
Even though this show is sold out, I'm hoping you can score some tickets on Craigslist or at the door, because it's definitely the show of the week. My fellow L.A. transplant via Michigan has carved a niche for his thoroughly unique sound and celebrates the release of his third album, Where Does This Door Go, tonight with this hometown show. NPR is currently streaming the album, so you can practice dancing to the 14 tracks, which feature assists from Pharrell Williams, Jack Splash, Oak and Greg Wills.

Posted by Jigsaw Magazine at 10:29 AM