Sunset Strip Market @ 8755 Sunset Blvd. (West Hollywood)
Every Thursday night through October, the seasonal market offers produce from farmers like Denny's Organic Farm and Cuyama Orchards and products from local artisans such as Alex's Fruits & Nuts and Farmhouse Kitchen. After shopping, you can grab some dumplings from Red Dot, fries from the Belgian Fry Shack, tacos from this week's visitors Kogi Truck, as well as beverages from the craft beer and wine garden then grab a seat for a screening of Karate Kid at 8:15 p.m. Throughout the night there are also musical performances from Tru Cisco, Xander Smith (acoustic) and Run Run Run.


dineLA Restaurant Week @ Various restaurants throughout the city
Although the event is technically 12 days (running through July 26), dineLA Restaurant Week is definitely one of the best times of year to visit the city's best establishments, especially if you're on a budget. Places from Bouchon, Willie Jane, Rivera and Mo-Chica to El Cholo, Season's 52 and Mohawk Bend are serving prix-fixe meals from $15 to $45. Now is your chance to try a new restaurant or visit an old favorite at a special price.


In Theaters This Week
The terrifying The Conjuring stars Vera Farmig, Patrick Wilson and Ron Livingston; Kirsten Wiig plays a failed playwright who is forced to move back home with her family in Girl Most Likely; Only God Forgives reunites Drive director Nicolas Winding Refn with Ryan Gosling, who stars as a drug kingpin out to avenge his brother's death in Bangkok; Bruce Willis, Helen Mirren and Mary-Louise Parker returns for Red 2; R.I.P.D. stars Jeff Bridges and Ryan Reynolds as officers policing otherworldly spirits. Also in theaters: The Act of Killing; Big Words; Blackfish; Dealin' with Idiots; Grabbers; Iceberg Slim: Portrait of a Pimp; The Rooftop; Terms and Conditions May Apply; Turbo


My Gold Mask @ Bootleg Bar (Westlake)
The trio, led by vocalist/percussionist Gretta Rochelle and guitarist Jack Armondo, bring their unique brand of dark pop to town via their headlining national tour with fellow Chicagoans California Wives. In addition to their latest album, Leave Me Midnight, which came out earlier this year, My Gold Mask just released a new single, "Dangerous," that is just as menacing as the title promises.

Rogue Wave @ El Rey Theatre (Miracle Mile)
I absolutely love Nightingale Floors, the Bay Area band's fifth studio album that released last month, and since this is their first tour in three years, there is really no reason to miss this show. Just listen to the album's first two tracks, and you'll see what I mean. Whether you love their dreamy, psychedelic, somber or more poppy songs, the night is sure to be a memorable one.


Mean Girls @ Poinsettia Park (Mid-City West)
Street Food Cinema projects Lindsay Lohan, Rachel McAdams, Lacey Chabert and Amanda Seyfried on their oversized inflatable screen in the 2004 comedy Mean Girls, which had a screenplay penned by Tina Fey. The movie starts at 8:30 p.m., but come early for a set from Elle Rae, a contest hosted by Grant Cotter and food and drink from the Grilled Cheese Truck, Waffles Deliege and Perk Up Coffee.


Jeff Garlin's Reading Group @ Book Soup (West Hollywood)
If you love books and are currently experiencing "Curb Your Enthusiasm" withdrawals, then kill two birds with one stone and join Jeff Garlin's Reading Group for an evening. The subject for this discussion is Gillian Flynn's bestselling suspense novel from last year, Gone Girl, which centers around a Missouri couple, Nick and Amy Dunne, celebrating their fifth anniversary when Amy suddenly disappears. Comedian Garlin is also hosting a conversation with "Breaking Bad" director Vince Gilligan at Largo on Monday, but unfortunately that event is sold out. 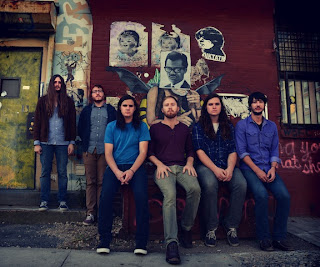 
Roadkill Ghost Choir @ Bootleg Bar (Westlake)
The folk rockers just released a new EP, Quiet Light, and cross the country from their Florida home base in its support. From the banjo twang of opener "Beggars' Guild" to the thundering bass drum and soothing horns of closer "In the Lion's Mouth," the six-piece pulls from their wide range of influences (Gram Parsons, Nirvana, Fleetwood Mac, Radiohead) to appeal to all ears, and their live show promises to be just as pleasing.


The Postal Service @ Greek Theatre (Griffith Park)
I was lucky enough to catch the supergroup's first tour back when Give Up was released in 2003, and it is hands-down one of my favorite concerts ever. I was so excited when they decided to reissue the album for its 10th anniversary this year and officially reunite for a world tour that includes this two-night stand at the Greek. This is, of course, my pick for show of the week, so don't miss the opportunity to see Ben Gibbard, Jimmy Tamborello and Jenny Lewis on stage together at one of my favorite outdoor venues in the country.


Happy Hollows @ The Satellite (Silver Lake)
Celebrate Hump Day and the July 30 release of the L.A. trio's sophomore album, Amethyst, with a party of a show at the Satellite. You know I'm a sucker for a song with sing-along-able "ooh ohhs" such as "Galaxies" from the album that was recorded with producer Lewis Pesacov (Best Coast, Fools Gold). Vocalist/guitarist Sarah Negahdari is the touring bassist for Silversun Pickups, and it will be fun to see her assume the frontwoman role with Happy Hollows.

Posted by Jigsaw Magazine at 10:04 AM