At first Amanda Raya may seem like your typical 14-year-old. She loves shopping, Taylor Swift and communicating via Twitter. Once she starts talking about her music, however, it's clear that the pop singer-songwriter is more passionate about her craft than most teens are about anything.

"I love working on my music, creating and recording it," Amanda says. "I am really passionate about my music. I want people to connect with my songs, I want them to be memorable to many people."

Her drive and determination bring her all the way to Los Angeles from her home in Toronto, Canada, during summer break to do promotion for her first single, "Without No Doubt," which released last month. Although, the trip isn't that much of a sacrifice when you ask her: She takes every opportunity to express how much she loves the City of Angels.

"I love L.A.! I have family here, so we visit whenever we can," she shares. "I really like to go to the Americana at Brand, the Glendale Galleria mall and the beach in Santa Monica. When I was here in April we went to Universal Studios, which was really cool." 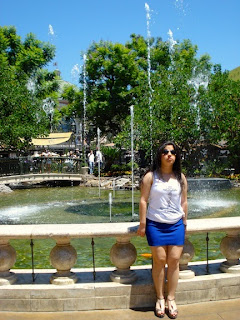 Today we meet at another of her favorite places in Los Angeles, the Grove. You never know what celebrities you might run into at the retail and entertainment complex. "Extra" is filmed here during the week, and there are free concerts throughout the summer (Sara Evans on July 17, Capital Cities on July 24 and the Backstreet Boys on July 31). Amanda's primary mission when she's at the Grove is shopping, though, and her favorite store is Forever 21.

"I really love the scenery here at the Grove, especially the water fountain when they do the water show with music," she admits. "It's just such a nice place to walk around."

It's a sweltering day, so we take a seat in the shade to talk about her influences, future plans and even find out what a typical Saturday might entail back in Toronto.

"I would normally try to hang out with some friends. I'm on my phone a lot. If I have a lot of homework, then I would do some homework, but usually I like Saturday to be my chill day, so I wake up at about 12:30 p.m.," she says with a laugh. "On weekends, I sing all of my songs and try to go over them so that I'm prepared for any performances that might come up."

There's that strong work ethic shining through again. A fierce will is something that Amanda has cultivated since birth. Although she is visually impaired, she is far from handicapped. If anything, her impairment has made her even more fiercely determined to achieve her dreams.

"I think my positive attitude helps, but mostly it's my friends and family that have been so supportive with my music," she insists. "It's great to have them around because they're a really big part of this for me. I'm so grateful to them for being so supportive."

One of her sisters lends her voice to contributing background vocals on "Without No Doubt," which, Amanda says, makes the song even more special. Music is a big part of their household, with the sisters singing around Amanda playing the piano or listening to songs together. She first picked up the piano by ear at age 5 and recently started learning the guitar.

"I've always loved piano since I was young; it came naturally to me when I started taking lessons," Amanda remembers. "I play classical piano, too, so I have composed some classical pieces." 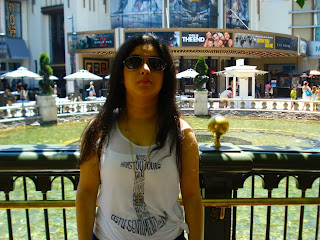 Currently she's completely focused on writing pop material, though, and it's usually a melody that will first sprout in her brain before lyrics begin to grow. Such was the case with the beginnings of "Without No Doubt."

"I can't just sit down and say, 'OK, now I'm writing a song.' That doesn't work for me, it has to come naturally like when I wrote 'Without No Doubt' during grade 8," she confesses. "I was sitting in class, and the tune just came to me. I kept on working on it, and then I performed it for our middle school talent show. My former grade 5 teacher fell in love with it and passed it along to who would eventually become my manager."

Aside from promoting the release of "Without No Doubt," constantly practicing and prepping for performances and gearing up to record more of her songs, straight-A student Amanda is set to begin high school in the fall. She has already signed up for vocal class and hopes to continue performing in school productions.

While she loves Broadway musicals like "Wicked" and "The Sound of Music," she is really into pop music, specifically Taylor Swift, Ed Sheeran, Maroon 5, Adele and Alicia Keys. She just attended a Taylor Swift/Ed Sheeran concert in Toronto and came away with a lot of inspiration.

"Taylor Swift said a lot of inspiring things at the concert that I will remember. When she was young she always wanted to grow up because she thought bullying was just a school thing, but as she got older she received a lot of criticism. One critic even said that she couldn't sing, but nothing knocked her down," Amanda tells before reflecting on her own experiences. "It's just like me, even if people might say one bad comment about me, I won't let that knock me down. I won't give up. I will continue putting my music out there and being who I am."

Like I said before, Amanda Raya is anything but your typical teenage girl. She is on the road to becoming a true force to be reckoned with.

"Without No Doubt" is currently available from iTunes. For more information, visit amandaraya.com.


Posted by Jigsaw Magazine at 9:34 AM