A lot of people like Los Angeles for the fact that they can surf and ski in the same day. I love how it not only appeals to surfers and snow bunnies but also to those who love exploring nature in the Santa Monica Mountains, dancing at a trendy club in West Hollywood or grabbing a beer at a dive bar Downtown. There really is something for everyone here, including bands that run the gamut of musical genres.

However, few local acts fully encapsulate the spirit of Los Angeles like Terraplane Sun. Since 2009, the Venice-based quintet has put their own spin on classic rock elements from the blues, country and soul – delivered with a deftness that comes from years spent honing their skills on various instruments. You can feel the laid-back vibe of sun-drenched days at the beach along with the coolness of a nighttime drive beneath the city's skyscrapers in their songs.

The band is somewhat of a rarity, in that, four of its five members (vocalist Ben Rothbard, guitarist Johnny Zambetti, keyboardist Gabe Feenberg and drummer Lyle Riddle) actually grew up in Los Angeles. Bassist Chris "Cecil" Campanaro, who was raised in Florida, is the lone exception, although he has lived here for a few years now. Having just released their latest effort, the Friends EP, last month, Terraplane Sun took some time during a brief respite in between tour dates to share their wealth of L.A. knowledge with me at one of their favorite neighborhood haunts, Venice Ale House.

The New American gastropub is situated on the north end of the Venice Boardwalk, where Rose Avenue meets Ocean Front Walk, and prides itself on serving organic, wholesome food, as well as an extensive list of craft beers. Its patio is the perfect place to sit in the sun, take in the ocean view and a Skate of Beers: six (or four) four-ounce samplers served on a skateboard. Since it's walking distance from Lyle's place, Venice Ale House is a great meeting place for the guys.

"The Corn on the Cob à La Mexicana [roasted in lemon, cayenne, sea salt and Cotija cheese] is outrageous," says Johnny. "They've got a really good beer selection, too."

"The Grilled Portobello Sandwich [with grilled zucchini, roasted red pepper and chipotle aioli] is so on point," says Lyle. "It's one of my favorite things ever."

While they have no problem spilling their usual orders at Venice Ale House, when it comes to planning out an itinerary for a visit by some out-of-town friends, Johnny is less confident in giving an immediate answer.

"That gives me so much anxiety! I went to school back east and when all my friends there want to come out, I get anxious because there's so much to do with someone who has never been to L.A. before. Do you take them to Hollywood and do the Walk of Fame? I mean, that's not really fun."

"You have to break it into individual areas instead of trying to go everywhere on one day," suggests Ben. "Spend a day seeing Silver Lake, then a few days in Venice."

"If we were talking specifically about Venice, then definitely Venice Ale House is a good spot," offers Lyle. "The canals, you always have to stroll through the canals. My favorite is Obsolete Art Gallery right on Main Street. A lot of people that live here don't even know about it, there's so much going on there. The Santa Monica Promenade. Hotel Erwin."

After taking time to ponder the idea, Johnny chimes in: "You've definitely got to have the beach aspect. I always try to go up to Malibu. It's always going to be nice because of the weather. Then you go to dinner here in Venice or inland, like at the Foundation Room at the House of Blues. There's one table, Dan Aykroyd's private table, you have to ask for it, and it's on the balcony with such a great view."

Knowing that Ben loves to surf, I have to inquire about his favorite spots.

"I normally go up north," he says. "I like Zuma Beach, that's probably my favorite place. The whole Paradise Cove area and Ventura, too"

On a typical Saturday afternoon, Johnny says they would normally hop on some bicycles.

"We would make our way down Main Street to the waterfront," he says. "You run into so many different people along the way. One time we ended up with 14 person crew."

"People love to day drink here in Venice," says Ben. "We usually end up at the Whaler."

No matter where they're hanging out, it's evident from spending just a few minutes with the guys that they have an innate chemistry with one another. Ben and Cecil are founding members of the band, who released a self-titled debut in 2009 before taking a brief hiatus during which time Ben met Johnny as extras on the set of an Allstate Insurance commercial. Gabe and Lyle were added to the mix, and they released Coyote in 2011. The band caught the attention of the media and many listeners when its songs were featured on television shows like "The Big C," "Nurse Jackie," "Relapse" and "Damages." The group enlisted veteran producer Dave Trumfio (Wilco, My Morning Jacket) for Friends, which has once again resulted in Terraplane Sun's placement in TV ("Teen Wolf," a Citibank ad campaign) and film (21 Jump Street, What To Expect When You're Expecting) spots.

The band has been touring in support of the EP, from a residency at the Satellite to festivals like South By Southwest, Fiesta Del Sol and Sunset Strip Music Festival, which was quite significant since several of the members played their first shows ever on the Strip. 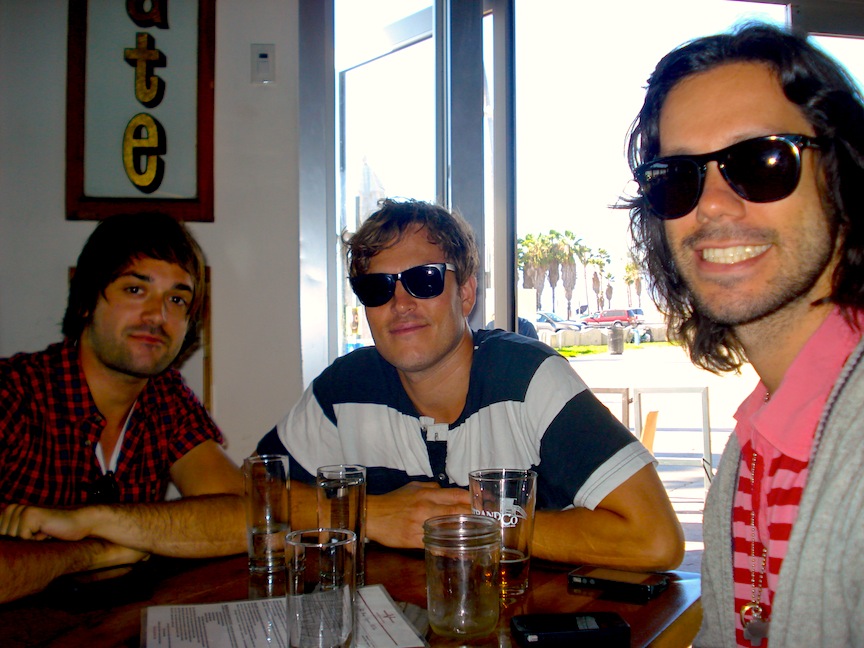 "I played my first show at On the Rox," shares Ben.

"The first show I ever played was on the Sunset Strip, I was 11 years old," says Johnny. "I grew up going to shows on the Strip. I used to go see Mickey Avalon after school. I had my school uniform on and would change in the car. I was still underage."

"Playing Sunset Strip Music Fest was really cool," he continues. "I don't think I would have normally gone out of my way to see Marilyn Manson. Ray Manzarek came on stage, and Manson really channeled Jim Morrison on some of the Doors covers."

"Early on, the first shows I ever went to on my own were at the Troubadour," admits Lyle. "The (International) Noise Conspiracy with Minus the Bear was a crazy show. It was packed. In a way, T(I)NC turned me onto the Rolling Stones, kind of ripping their style off. I was about 16 years old, and it was cool seeing live rock 'n' roll. That show was definitely historical."

When asked if he prefers playing small club shows or big festivals, Lyle replies, "It's like whiskey and wine – I love both, but for different occasions. Sometimes you want to take a shot and sometimes you just want to chill."

One commonality that exists among all of Terraplane Sun's members is that music was a constant presence in each of their childhoods.

Lyle comments, "Music is in all of our backgrounds really. My stepdad was a drummer, Johnny's dad was a pretty awesome musician. My dad was always bumping Zeppelin, Genesis, the Beatles and the Who. I just came out loving drums, always banging on pots and pans and wanting to learn really badly. About fifth grade I became a huge Nirvana fan, listening to their records all the time. I remember the first time I sat down at a drum set at my cousin's house. I was playing them backwards. My brother was like, 'That's not how you do it,' and it tore my heart out."

"Environment definitely influenced me, growing up there were guitars hanging on the walls. They didn't push it on me, I kind of found it on my own though. I tried everything _ the piano, the drums, but guitar is what struck a chord," laughs Johnny. "I've been playing since I was 8, I'm a child of rock 'n' roll. The first album I found on my own was Rancid's …And Out Come the Wolves. I think I stole it from Kmart, put it in my pocket and ran out the door."

"I had to play an instrument," says Ben. "I started on the piano, and then the guitar. When you're young and get upset, all you want to do is play guitar with your friends. I tried to write when I was younger but never found my voice until I was older."

While tracks like "Ya Never Know" and "Get Me Golden" definitely resonant with audience and are quickly becoming crowd favorites, there's another song on Friends that really touches Lyle in particular.

"'No Regrets' had a big impact on me when we were writing it. When we were going into the studio to do that record, I walked away from a pretty secure job. There's a line, 'Trade my car for a pair of boots,' and a lot of people are latching onto that," he says. "It's probably my favorite song on the record. It's so important to have no regrets to pursue what feels right in your soul."

Ben adds, "The worst that can happen is that you fail. A lot of people are driven by fear itself, and you can't let it determine your path. Collectively we're all—"

"We can't really do anything else," interjects Johnny with a laugh.

Whether it was picking up an instrument at 8 years old, seeing that first influential band at the Troubadour or continuing to discover new music together while listening to the radio on the road, music has been and continues to be the lifeblood of the members of Terraplane Sun.


Posted by Jigsaw Magazine at 1:51 PM