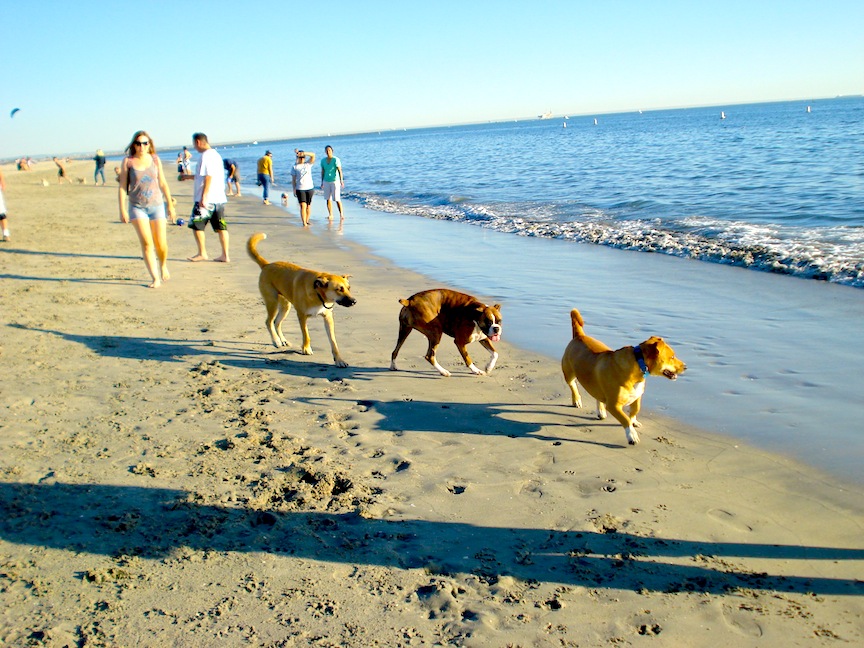 
It's quite infuriating and frustrating that there is only one legal, off-leash dog beach in L.A. County. It takes about 45 minutes to get to Rosie's Dog Beach from downtown Los Angeles, but the drive is worth it if you have a dog who loves to swim and run around in the sand as much as ours does. Nothing compares to her sheer joy when she is playing fetch, running freely along the shore and amongst the waves. It's such a great feeling to be surrounded by happy dogs. We even got to watch Sir Hollywood the bulldog skimboarding for a while.

Long Beach was allowed to launch a pilot program of daily off-leash access in August 2003, an effort led by a resident named Justin Rudd. The City Council unanimously approved the permanent off-leash dog zone the following year, and the area was officially renamed Rosie's Dog Beach on Aug. 3, 2010 in honor of Rudd's bulldog who inspired the entire campaign.

If you aren't lucky enough to find free street parking, there is a metered parking lot at Bennett Avenue and Ocean Boulevard. They only accept quarters, though, so come prepared. There is also a pay lot ($12) at Granada Avenue. The leash-free zone is located between Roycroft and Argonne Avenues; you will see orange cones delineating the area. Each dog must be accompanied by an adult, and it's best to not bring a picnic, just in case another dog accidentally runs onto your blanket.

Most of the people who come to Rosie's Dog Beach obviously love their dogs a lot to make the trek down there, so there aren't too many misbehaving pooches or instances of excrement being left behind. It is less crowded than Huntington Dog Beach in Orange County, but it is not as clean, in terms of the water quality. There is a Tidy Dog at 4110 E. Ocean Boulevard where you can rent a station to self-wash your dog for $15 after they roll around in the sand.

To join the effort for an off-leash zone in Santa Monica or Venice Beach, please visit unleashthebeach.org.

Posted by Jigsaw Magazine at 10:06 AM