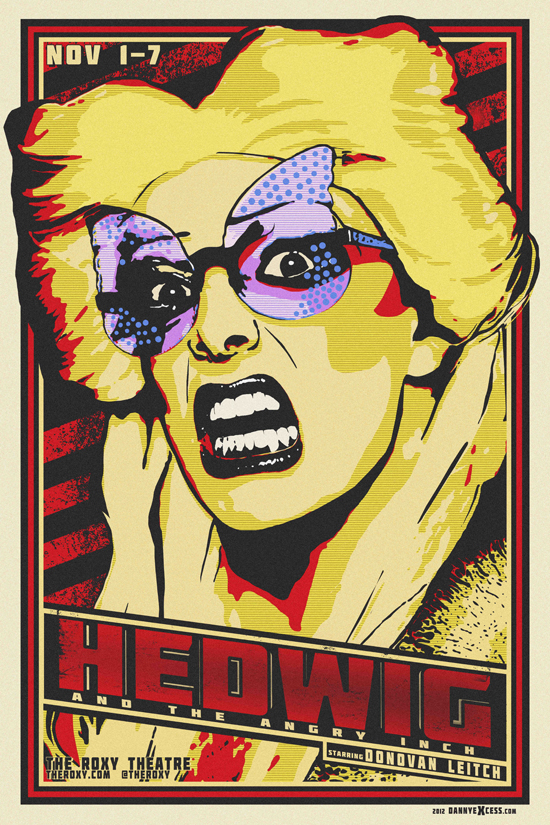 "Hedwig and the Angry Inch" @ The Roxy (West Hollywood)
Donovan Leitch reprises his lead role in the John Cameron Mitchell musical. Follow the journey of a German boy's transformation into one of rock 'n' roll's most glamorously trashy frontwomen. A portion of the proceeds from the production's week-long residency go to the Trevor Project.


Oliver Stone and Peter Kuznick @ Book Soup (West Hollywood)
The Academy Award winning director collaborates with American University professor/historian Kuznick for The Untold History of the United States, the companion book to their Showtime documentary series, which premieres at 8 p.m. on Nov. 12. The duo discusses and signs copies of the book that released this week and is full of poignant photos and little-known facts surrounding the rise of the American Empire and national security state from the late-nineteenth century through current times.


AFI Fest (Hollywood)
Audi's annual celebration of international cinema returns with galas, screenings and panel discussions at the Chinese 6 Theatres, Egyptian Theatre and the Roosevelt Hotel. From Ang Lee's Life of Pi and Steven Spielberg's Lincoln to David O. Russell's Silver Linings Playbook and Dustin Hoffman's Quartet, there's something for ever cinephile at the festival. Through Nov. 8

Alien Quadrilogy Midnights @ The Cinefamily at the Silent Movie Theatre (Mid-City West)
Every Friday in November, the Cinefamily presents a different film from the Alien series, starting tonight with the 2003 director's cut of Alien. Nov. 9 is Aliens, Nov. 16 is the Alien 3 assembly cut, Nov. 23 the 15th anniversary screening of Alien: Ressurection and Nov. 30 is a Doug Benson's Movie Interruption of Prometheus.

In Theaters This Week
Tobey Maguire, Elizabeth Banks and Laura Linney in The Details; Denzel Washington in Flight; Philip Seymour Hoffman, Christopher Walken and Catherine Keener in A Late Quartet; RZA's directorial debut, The Man with the Iron Fists; Wreck-It Ralph, with the voices of John C. Reilly, Sara Silverman and Jane Lynch; the Tony Bennett doc The Zen of Bennett. Also in theaters: The Bay; Jack & Diane; This Must Be the Place; Vamps


The Devil Makes Three @ House of Blues Sunset Strip (West Hollywood)
The trio's next album won't be coming out until next year, but they'll definitely be playing some new tracks at this show. If you're a fan of the blues, their acoustic roots music will speak to your soul.


Kevin Pollak @ Barnes & Noble (The Grove)
The comedian/actor celebrates this week's release of his book, How I Slept My Way to the Middle: Secrets and Stories From Stage, Screen, and Interwebs, with a special evening at the Grove location. Never-before-heard stories of legends like Robert De Niro, Tom Hanks and Ron Howard are interwoven with scenes from Pollak's life in stand-up and film and as a new media entrepreneur.
Posted by Jigsaw Magazine at 11:24 AM