Because of its close proximity to Little Tokyo, there aren't many great Japanese restaurants in Silver Lake. There are pho and Thai soup joints aplenty, but even with the current rage over ramen there were absolutely no ramen restaurants in the neighborhood. Then, in September, Silver Lake Ramen finally opened in the Silversun Plaza.

Although the rich pork broth at places like Daikokuya or levels of spiciness offered at Orochon are what have catapulted ramen to popularity, I had been on the prowl for a good vegetable ramen for about a year. I tried every place in Little Tokyo that offered veggie ramen, even Shojin, which specializes in vegan cuisine. While those were OK, I hadn't found a bowl of vegetable ramen as delicious and fulfilling as the pork version until I tried Silver Lake Ramen's. 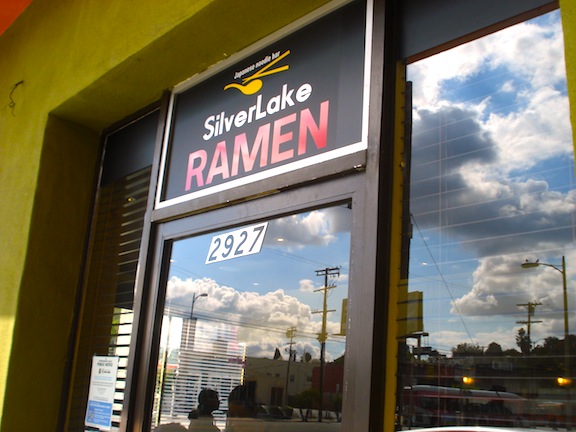 It's easily the best vegetable ramen that I've ever had. Their miso broth is hearty and satisfying, their noodles are cooked perfectly al dente and the array of vegetables topping the bowl – corn, bean sprouts, mushrooms, broccoli and, oddly enough, salad greens – keep it from being boring. The uniquely shaped bowls, resembling upside-down hats, are able to carry just the right amount of broth in relation to toppings and noodles so I don't leave a massive pool of plain broth at the end.

The tonkotsu ramen features a broth that has simmered overnight for 16 hours, and you can order it spicy, with a shoyu broth or even with pieces of chicken instead of pork belly. It's topped with spinach, green onions, bean sprouts and a square of nori, but you can order additional items, such as a soft-boiled egg, crushed garlic or extra noodles, as well. There is also a tsukemen option with slightly thicker noodles for dipping.

For an extra $3.50, you could add a salad and rice bowl with spicy tuna, chashu or ground pork to your ramen. They also serve some decadent oyster mushrooms sautéed in butter, a refreshing cucumber and crab salad and handmade pork gyoza. There are a few sushi items on the menu, a veggie roll, shrimp tempura roll or spicy tuna on crispy rice. But the main attraction is definitely the ramen, and the vegetable ramen easily makes Silver Lake Ramen one of my favorite neighborhood haunts.
Posted by Jigsaw Magazine at 10:08 AM