Cécile Hortensia's story so far is the epitome of the American Dream. Born in Nancy, France, she immigrated to Arizona hoping for change and the chance to explore a lifelong passion for music.

"It was a period in my life where I had a job for 10 years, and I wanted a change. My husband had the opportunity to get a job in Arizona, so we took it as a chance to get a fresh start somewhere. Arizona is perfect for that, all of the USA is perfect for that. As a migrant country, it attracts dreamers. The American Dream still exists," she says.

Last month, one of her dreams was fulfilled when the singer-songwriter released her debut album, Papillons. The word, which is French for 'butterflies,' is one that has several meanings for Cécile.

"The first song that I chose for the album was 'Les Papillons dans l'Estomac (Butterflies in my Belly),' and it's a love song about the way you feel when you meet a guy and it feels like there are butterflies in your stomach. For me, butterflies are what I call people that I love. They are my butterflies because they bring me butterflies in the stomach," she admits. "In a way, when I came to America I was in a cocoon, and I became a butterfly here. I like this metaphor as well. It's true, because I was not in music before. I always dreamed of being a musician and a songwriter, but I wouldn't dare before. It took some courage to say, 'OK, let's take this fresh start in America to give my music a chance.' That's the idea of the cocoon and becoming a butterfly. That's the reason why this record is my butterfly."

Coming to America from France to pursue a different life path is a commonality Cécile shares with Chef Michel Richard, the owner of Maison Richard, where we meet for a conversation the day before her first show in Los Angeles. The restauranteur opened his first restaurant and pastry shop on Robertson Boulevard over 35 years ago, garnering praise for his divine pastries. He eventually relocated to Stanley Avenue in 2010, and Maison Richard has been satisfying diners with everything from patés and delectable cheese plates to savory quiches and classic Roasted Chicken ever since. But the real stars here are the patisseries, such as chocolate or coffee custard-filled éclairs, various fruit tarts and buttery, flaky croissants.

Cécile points out a napoleon of chocolate, sponge cake and custard as her recommendation when we peruse the pastry-filled display case. As we enjoy a bit of sunshine on Maison Richard's patio, surrounded by lush green foliage and the soothing trickle of a water fountain, she tells me that this is her first trip to Los Angeles for professional reasons. 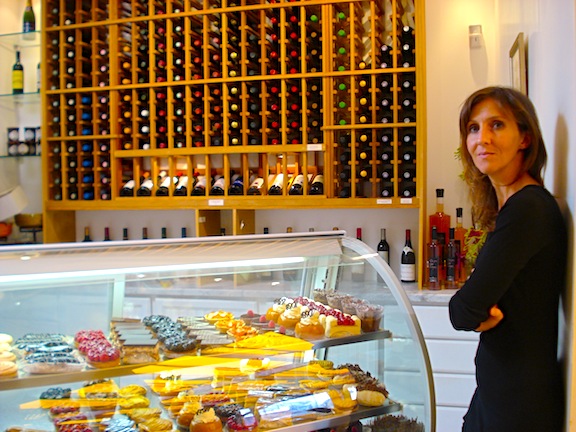 "Before, I came just as a tourist. I have kids, so we went to Disneyland, Universal Studios, Santa Monica Pier and the beach, the Walk of Fame in Hollywood – like all tourists," she says.

And like most newcomers to the country, she came with a few preconceived notions fostered from one of America's most well-known exports: films.

"I had all the pictures in my head of western movies. When you come from Europe, American movies are part of our culture as well," she shares. "I come from the mountains, I was living in the Alps. Now I'm glad to live in Arizona because the desert is really beautiful. I couldn't have written some of the songs [on Papillons] without living in Arizona. 'Cactus Road,' 'Coyote' and 'This Is My Home' – all those songs were inspired by my life in Arizona and the landscapes surrounding my new home."

As she eased into life in Phoenix, she made the acquaintance of producer Olivier Zahm, who, by chance, is also a French transplant. The pair collaborated by writing a few songs together, and he eventually assumed production duites on Papillons.

"We met by chance, but it has made things effortless to understand each other because we share the same culture, we are of the same generation as well and we have the same musical references. He also knows a lot of American musicians," she says. "I wanted to add an American feeling [to the album], and it was very interesting for me to work with them so they could bring their vibe, their culture. In a way, the aim of the album was to blend both cultures."

Cécile has indeed melded both her French heritage and adopted American culture into Papillons. She easily drifts from French to English throughout the 12 tracks, offering her stories through a refreshingly unique perspective in a medium that the world can understand: music. Her love of the art form began at a young age.

"In childhood, I was always singing. We went to church, and the only thing I liked in the church was the singing," she laughs. "My parents listened to French music, like Édith Piaf, Jacques Brel – all of the classical French standards – and also Simon & Garfunkel, artists like that. After I developed my own taste, it was Tracy Chapman, Leonard Cohen, Tori Amos and some French rock bands. I was more attracted to folk music."

One of her current musical obsessions finds his way onto Papillons via an ode in which Cécile croons, "If I were a man, I would be Ray LaMontagne."

"I am a huge fan of Ray LaMontagne. I saw him when he played in Phoenix last year. He's got an amazing voice, and live it's even better," she gushes. "He's got such a presence. I really admire his music, but also that he is very reserved about his personal life. He's not a huge star, he's just really good at what he does."

Cécile is transforming into quite the talented songwriter herself. Writing is a skill she began honing when she was young, and it has become a source of great joy for her.

"I started with poetry. I was inspired a lot by French poetry like Arthur Rimbaud and all the classical French poets. That's how I started to write songs," she says. "First I started with lyrics and after that, I started to write complete songs, music and the lyrics together. It took a little bit of time, but finally I took so much pleasure in that. The creative part is really the most interesting for me. I couldn't just sing. The interesting part is the creativity from the beginning of the song and in the studio to the stage, the whole thing."

As she kicks off a performance schedule that reaches well into the New Year, Cécile has one fundamental hope for listeners of Papillons and audiences at her shows.

"What I like in music is when I can sing with the singer, when the song is catchy and you can recognize the melody pretty quickly. When I write, especially lyrics, I want to touch people's hearts in a simple way. I don't want to be too in control, just bring some images, some pictures so people are touched by something. They can take a word, a sound, whatever they want, just to be touched by something. I think every artist would just like to touch people with what they write, even if it's only one song that talks to them. I would be happy if I can do that, it's my goal."

Posted by Jigsaw Magazine at 10:26 AM