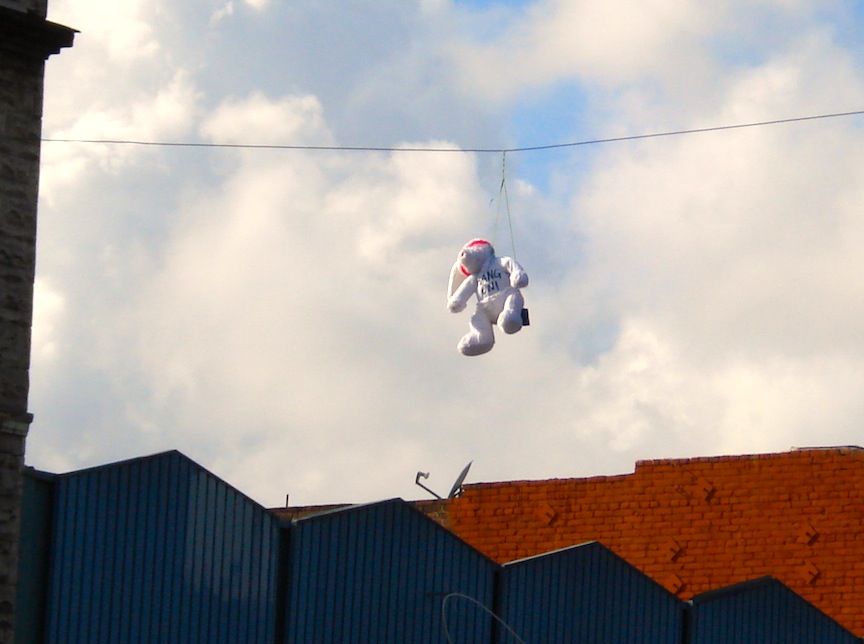 Pretty much every intersection of Echo Park Avenue, from Sunset Boulevard to Morton Avenue, in Echo Park is watched over by a stuffed animal – a rabbit, bear or frog – painted with a pink mask across its eyes. The fluorescent pink mask is the trademark of Leyla "Lo" Safai, who established HeartsChallenger as a visual art outlet in 2005.

She eventually started up an ice cream truck bearing the same moniker, and when it came time to create music for the truck to blare as it traveled through the streets, she turned to friend Ben Pollock. The duo became a music group, HeartsRevolution, in late 2005. Since then, they've toured the world over, leaving a trail of pink-masked paraphernalia in their wake.

The rabbit above can be found at Echo Park Avenue and Sunset Boulevard, and it not only wears the pink mask, it dons a T-shirt with 'Hang On!' emblazoned on its chest. More photos of stuffed animals hanging around the city are at Heart Street He(art).

Posted by Jigsaw Magazine at 9:24 AM