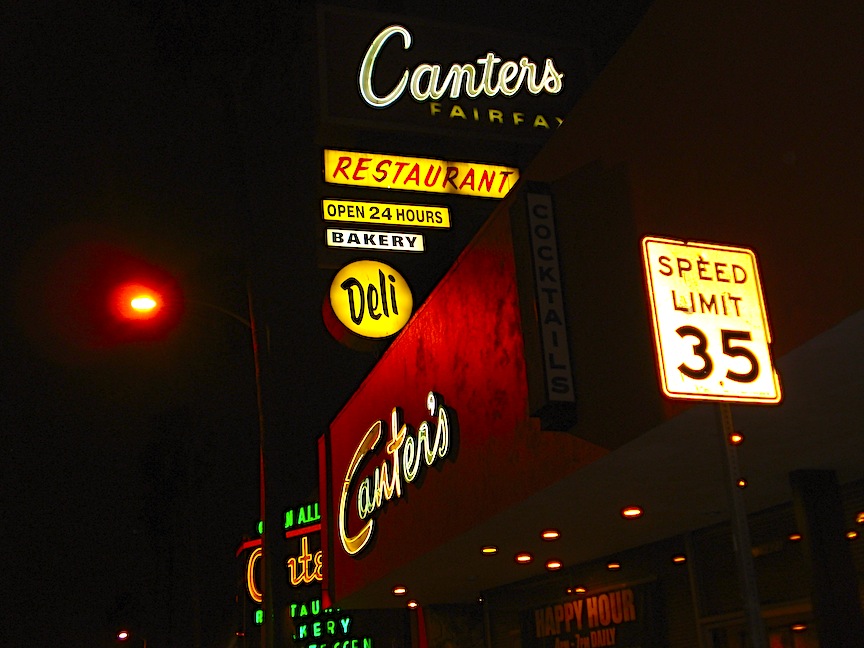 
Walking into Canter's Deli is like stepping into another dimension where time stands still. With its art-deco furnishings, autumn-leaves ceiling and framed newspaper articles and black-and-white photos adorning the walls, you feel as if you just entered a 1950s diner. While hoards of tourists visit the delicatessen every day to get a taste of its legendary charm, its the colorful cast of local regulars who fill the booths into the wee hours of the night and make Canter's one of my favorite L.A. landmarks. 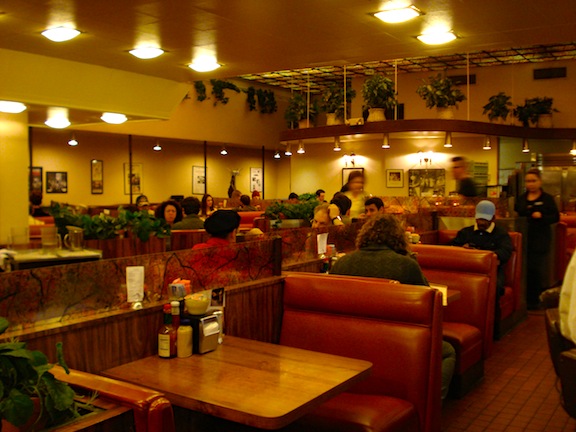 After the 1929 stock market crash, Ben Canter and his two brothers lost their New Jersey deli and transplanted their business to Boyle Heights, Calif. in 1931. Canter Brothers' Delicatessen thrived in the Jewish center of the city, but when the area began to change Ben relocated to Fairfax Avenue with his wife Jennie, daughter Selma Udko and son-in-law Harold Price. The established Canter's at the location of the old Esquire Theatre in 1953, and ever since it has remained a family-owned business, open 24 hours a day except for Rosh Hashanah and Yom Kippur.

Canter's authentic, Jewish-deli comfort food is what it's known for. Whether you come for a Number Seven breakfast (bagels, lox, cream cheese, onion, tomato and olives), a bowl of Matzo Ball soup and a Monte Cristo sandwich for lunch or a full Corned Beef and Cabbage dinner, you're guaranteed to leave satisfied. While they're known for their Pastrami and Corned Beef Reubens, they offer some pretty unique sandwiches, such as the Mac-Attack, with bacon and sharp cheddar melted over a scoop of macaroni and cheese pressed between slices of sourdough bread.

The first thing you see after walking through Canter's doors is the bakery case. Savory bagels, loaves of challah, piles of buttery cookies, layered apple strudel and rich cheesecakes sit encased in glass. Some of the most mouth-watering treats to be had at Canter's are the rugelach. The most popular flavor of the Jewish pastries at the restaurant is the Chocolate Chip Rugula, which are so rich and decadent. 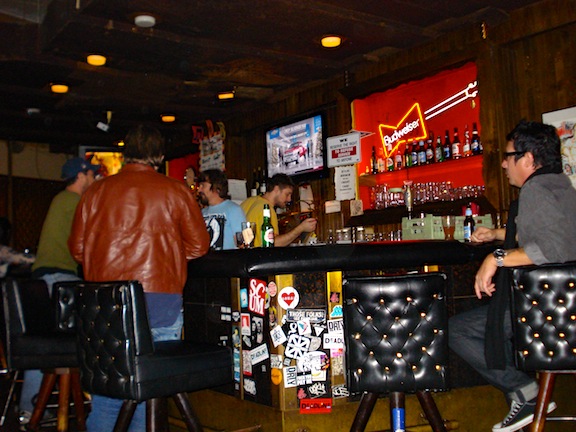 Located in the heart of the city, it's no wonder that celebrities like Elizabeth Taylor, Sydney Poitier, Johnny Depp, Prince, Muhammad Ali and Marilyn Monroe have all noshed on a plate of Canter's famous pickles. The Turtles mention the deli in their song "Oh Daddy," and it's featured in Ann Patchett's novel The Magician's Assistant, films like I Ought to Be in Pictures and TV shows like "Entourage," "Curb Your Enthusiasm" and "Private Practice." In 2010, Canter's joined the L.A. food truck race with its own truck, bringing some of its most well-known dishes to the streets of the city.

The main attraction for me has always been Canter's cocktail lounge, the Kibitz Room. In Yiddish, 'kibitz' means to speak informally or offer advice, and since opening in 1961, the Kibitz Room has hosted many interesting chat sessions over well-poured glasses of alcohol. I started visiting the lounge to check out local bands and was often surprised to see well-known musicians grab the mic for an impromptu midnight jam session. Throughout its history, Kibitz has seen everyone from Frank Zappa, Fiona Apple, the Doors, Jackson Browne, Joni Mitchell and Rick James grace its stage. Most notably, Ben and Jennie's grandson Marc Canter's high school friend Saul Hudson and his band spent several of their early days hanging out in the lounge. They would later become known the world over as Slash and Guns N' Roses, and Marc documented their rise to fame in his book, Reckless Road.

Posted by Jigsaw Magazine at 9:51 AM