Mexican food is usually the one thing that most Angelenos crave when they're away from home, and it's definitely a top draw to the City of Angels for Atlanta native Shameik Moore. Whenever the singer, actor and dancer visits the L.A. area, it's mandatory that he grab a steak burrito at Sharky's Woodfired Mexican Grill in Toluca Lake.

The 17-year-old first discovered the fast-casual, yet fresh and healthy restaurant over the summer when he was in town filming the first season of "Incredible Crew," a live-action, sketch comedy show produced by Nick Cannon for Cartoon Network.

"We came here to meet my mom's friend, and I really liked the food. That started the burrito addiction," confesses Shameik.

He holds up half of his usual Angus Steak Sharky's Burrito stuffed with meat, rice, beans and the most crucial ingredient of all – according to Shameik – sour cream and declares, "It looks like heaven in your hands!  It took me a while to find a really good Mexican restaurant in Atlanta but I found one down the street that I go to often. I get the same exact thing, a steak burrito. It's not better than Sharky's, though. Sharky's is my favorite."

Sharky's makes it a point to set itself apart from most establishments, even those in Los Angeles, by offering healthier options like lower in fat whole-wheat tortillas, organic tofu and vegetable fillings and low-carb Power Plates and salads. Their vegetables are all organic, and their proteins are hormone-, preservative-, antibiotic- and phosphate-free.

Besides quenching his burrito habit at Sharky's, Shameik loves being in Los Angeles for a few other reasons.

"As soon as I get off the plane I feel a different vibe. I feel more creative. I like meeting new people here because there are a lot more people who do what I do, who have the same interests, that I can connect with on a different level. I enjoy that," he shares, before adding, "and you can't beat the weather."

Usually when he's in Los Angeles, he hangs out with the his five cast mates who comprise the ensemble of "Incredible Crew." And more often than not, they end up at the movies.

"I like to watch movies a lot, so I go with whomever wants to go. We saw The Avengers and The Amazing Spider-Man together as a cast, and we just saw Texas Chainsaw 3D. It was scary. I did not want to see it, but they forced me to," Shameik admits with a laugh. "I love action, that's my main thing. In action movies you get to jump off stuff, fight people, use weapons. Man, it's just exciting.I would love to be in an action movie and in a romantic movie. Those are two of my goals for 2013. I could be in like Hancock 2: Son of Hancock. Will Smith, get at me. You know how awesome that would be, to be in an action movie? I would feel complete." 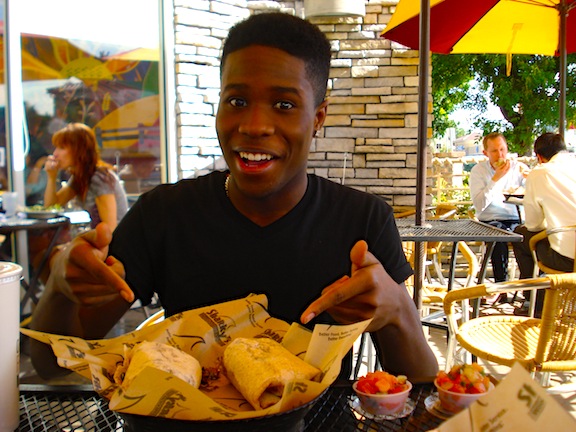 Shameik's preference for the action genre bleeds into what he chooses to watch on television as well.

"I like 'Arrow,' because it's acting for real, and then he just busts out in all these fighting scenes. It's intense. So is 'Nikita,'" he declares. "I've also been getting into mysteries, too, hence my 'Pretty Little Liars' addiction. I am addicted to the show, I can't help it. Aria is my favorite character, only because she's smoking hot. I also really love Spencer because she's the smart one of the group, and I believe her as a character."

As for Shameik's own screen experience, besides "Incredible Crew" he has appeared in several commercials for Cartoon Network that include "Paper Jamz Guitar," "Comedy Block Central" and "Pop Pop Toy." He has made several guest appearances on "Tyler Perry's House of Payne" and BET's "Reed Between the Lines." In addition, the talented teen made his big screen debut as the children's choir master in Joyful Noise, which starred Queen Latifah and Dolly Parton.

Although "Incredible Crew" is Shameik's first foray into sketch comedy, it seems that being funny has just always come naturally to him.

"I get it from my dad, he's naturally funny. We all just laugh at each other. I just let it loose on the audition for 'Incredible Crew,' and that's what got me the job," he says. "When I get a script for a sketch, the page is full of words, but I have to make it mean something – show how I see the character to be. I just improv. It's sketch comedy, so you just have to be funny and not take it too seriously all the time. It's hard to keep a straight face sometimes."

Anyone would find it hard not to bust out laughing while on the set with such a talented ensemble. Shameik finds it an even better place to be because he's surrounded by a cast comprised of his peers.

"We're all teens, so we can talk to each other because we're going through the same things. It's cool because everybody's nice and humble," he tells. "You can't just piece us together like a puzzle, we function more like a clock. Every person a certain purpose to make everything function together. We each have a role to do, and together we make the Incredible Crew."

The show, which airs every Thursday at 8 p.m., is the perfect venue for all the actors to show off their budding comedic talents in a myriad of situations presented in each sketch. There's one character in particular that Shameik loves to play.

"I love the sketch 'Super Annoying Guy on a Plane' because it was the first sketch I really got to shoot and because of how free it was," he says. "They were just like, 'Go for it, do whatever you feel is annoying.' I got to really improvise, be crazy and do stuff I'm not allowed to do on a regular day. It's my favorite sketch that I've done."

His high-energy and frenetic demeanor in the sketch make it absolutely hilarious to watch, but Shameik also gets to show off his other talents, including his dancing and singing, on "Incredible Crew." He was able to record the song "So Stylin" in Cannon's studio for a music video for the show.

"I'm really excited about that one," admits Shameik. "It's the one that I'm most excited for everyone to watch me in from the entire series because it connects music and my acting together."

Music has always been a part of his life since his dad is a professional reggae musician. 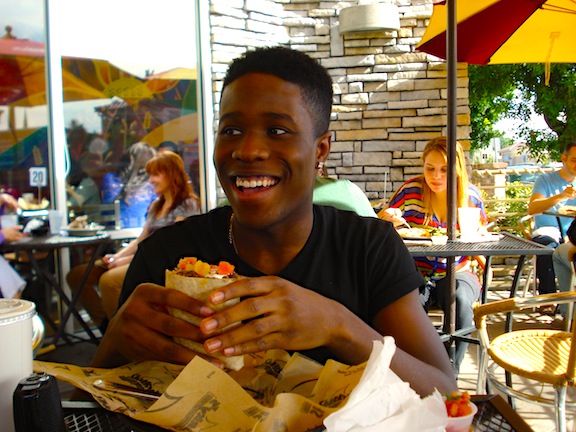 "He was playing a lot of music around the house," Shameik says of his father. "It was a lot of reggae. My entire family is Jamaican, so that's really all they listen to. My dad always tells this story where he would tap a rhythm on a table, and I would tap it back when I was little."

It seems like music was just an innate talent that Shameik was born with, but as he was growing up all he really wanted to be was a professional baller.

"I love basketball. It was my first love. Michael Jordan was my favorite player, and now I really love Kobe Bryant, Dwyane Wade and Rajon Rondo. At first I wasn't interested in music at all, I just wanted to be a ball player," he says. "Eventually when I heard hip hop and R&B around the age of 15, I loved it, and it was the style of music that I wanted to do. I love reggae music, but I didn't want to be a reggae singer. The style of music that I love is more hip hop, pop and R&B."

Shameik got to put his own musical tastes on display through the release of his debut mixtape, I Am Da Beat, last year. Even though you can hear tinges of reggae flow in "Show Out" (featuring Shawty Lo), it's straight-up hip hop on "Young Boi" (featuring TK Da Man) and R&B smoothness on the latest single, "Roc Wit Me." Shameik says that there is one contemporary artist who serves as his ultimate inspiration.

"Chris Brown is my inspiration. I love his music, his videos, his drive. He's a great performer and artist," he reveals. "I would love to work with Chris. I would also like to work with Ciara."

After basketball and before music, there was another art form that first piqued Shameik's interest.

"Dance was the first thing that I got into. My dad took me to see a movie called You Got Served. I went in with my pants pulled up to my bellybutton, and I came out sagging. It literally changed my life. I've loved dancing ever since then, and it was basically because of Omarion. He was my favorite in the movie. I just started watching him and fell in love with dance and couldn't stop," he recalls. "At first  when I said I want to dance, my parents didn't pay any real attention to it. Then when they actually saw me in action, they saw who I really was. They believed in me, got behind me and started taking me to dance class and helping me get to where I wanted to be."

"It was only two weeks after I started taking dance seriously. There were about 10 people between me and the other last dancer standing, and he beat me. It was embarrassing, there was so many people. It was a really good battle, though. I went through everybody, so I was feeling a bit cocky, then he just brought me back to speed," Shameik remembers. "I said, 'I'm never going to lose again.' So I worked and practiced, and when I met him again I beat him and haven't lost since. I was motivated to dance harder and to practice more. Losing was a good push. Things happen for a reason."

He honed his dance skills and was cast in music videos for for Keri Hilson ("Turnin' Me On"), Soulja Boy ("Bird Walk") and Pop It Off Boyz ("Crank Dat Batman"). There are two choreographers in particular that Shameik would love to work with.

"The choreographer of You Got Served, Dave Scott. He's really, really good. I would love to work with Roland 'RoRo' Tabor, the choreographer for some of Omarion's performances that I love, like the BET Hip Hop Awards and Soul Train Awards, too."

Aside from "Incredible Crew," continuing to polish his acting, dancing and singing abilities and releasing his latest single in "Roc Wit Me" and working on a new album, Shameik has his sights set on what many teens his age look forward to.

"I definitely plan on going to college, it's just about when. Right now if everything takes off well, like I hope it will, I might be too busy, but a few years from now I might be able to jump into it, get my degree and make my parents proud."

Posted by Jigsaw Magazine at 10:13 AM