When translated from an ancient dialect, the word 'nirè' means: the one with wings. And It's clear from the moment one first comes across singer and songwriter NiRè AllDai, that she's intent on keeping the world on its toes. Whether you became acquainted with her through songs she's written for artists like Mary J. Blige, Demi Lovato, KeKe Palmer, Keri Hilson, material she's worked on with Dr. Dre, Timbaland, Scott Storch, Swizz Beats or Stargate or through her own singles such as "STFU (Shut the Fuck Up & Party)," "Inside Out" and "Hella Bad," her magnetic personality, inimitable fashion sense and undeniable talent make her hard to ignore.

It's no wonder that such a force to be reckoned with would take me to one of the most unforgettable places I've been in all of Los Angeles: Lake Shrine Temple. With graceful swans and ducks wading in the lake, trickling waterfalls and walking paths lined by lush green foliage dotted with brightly colored flowers, it's truly one of the most remarkably gorgeous, serenely peaceful settings, and one of NiRè's favorite places ever.

"If you walk around the lake three times, you start burning karma," she informs me as we start walking around the grounds. "It's so crazy that a lot of people don't even know that it's here."

The plot of land was originally used for filming silent movies, before its hillsides were graded for development, save for a large basin. Natural springs filled the basin with water, forming Lake Santa Ynez. After sitting undeveloped for over 10 years, H. Everett McElroy bought the land with visions of turning the 10 acres into a private sanctuary for him and his wife. The McElroys lived in a houseboat they had transported to the site from Lake Mead while constructing the Mill House across the lake. Their eventual home was built complete with a 15-foot waterwheel that aids in sending overflow from the lake to the irrigation system.

In addition, they built a Dutch Windmill with a boat dock and landing before selling the property to an oil magnate, who moved into the windmill with plans to build a resort hotel at the site. His scheme was thwarted, however, when he dreamt three times of using the land as a "Church of All Religions." This phrase led him to the Self-Realization Fellowship Church of All Religions in Hollywood and its founder, Paramahansa Yogananda.

"Yogananda was a guru from India who came to America to bring yoga to the west. He prayed about having a place of serene, divine worship where people could come find peace," tells NiRè. "The whole purpose of Lake Shrine was for people to come here and be able to find peace."

Yogananda designed the Golden Lotus Archway, a "wall-less temple," and a monument honoring Mahatma Gandhi consisting of a brass and silver coffer with a portion of Gandhi's ashes encased in a thousand-year-old stone sarcophagus on the grounds. Lake Shrine was officially opened to the public in 1950, and in 1996, Yogananda's wish of constructing a temple on the site materialized in a 4,000 square foot white building on the hilltop overlooking the lake and the Pacific Ocean.

"My aunt used to come where when she was young; she used to study Self-Realization. I went a few times, and I really like what they talk about and how they focus inward to solve problems instead of looking to outside sources or other people for fulfillment and happiness – finding that within yourself," shares NiRè. "I love this place. I live in the Valley, and it's a drive, but if I get a chance to come this way, I have to stop here."

NiRè is a native Angeleno, grew up living in West Los Angeles and the South Bay and has spent the past few years living in Hollywood and parts of the Valley.

"I love this city. The weather is beautiful. The beach is right here, or if we wanted to go snowboarding we could go to the snow really quick. We could go to San Diego, San Francisco or to Vegas – everything is just right here and super convenient. People seem to be a bit friendlier," she says. "It's what I know. I'll always have a house here, and a place for L.A. in my heart."

When it comes to other L.A. favorites, NiRè is quick to give her hairstylist (Reina B. of Reina's Hairstyling) a shout out, as well as the Standard for a good place to go dancing with friends, but she is a bit hesitant when divulging her regular shopping haunts.

"All my places to shop, I want to keep on the down low," she laughs. "I like little boutiques, flea markets, vintage shops. I like mixing vintage with nice [higher-end] pieces, whether it's shoes or a  bag."

Besides Lake Shrine, some notable restaurants bring her to this side of town.

"There are so many cool places on PCH. There's Duke's, which I love. On the pier, right on the boardwalk, is the Beachcomber Café [which is now closed, sadly]. I always talk about it, but they serve tomato soup with blue cheese crumbles. And on top of it is a pot-pie crust. There's Café Habana, where they have Cuban food and the most amazing corn [the Grilled Corn Mexican Style]. I don't know exactly what's on it, but it's like God is in the corn."

NiRè's eyes light up when she describes the delicious corn and pretty much whenever she talks about anything that really excites her, especially music. Growing up, her parents listened to an eclectic range of music – "James Taylor, George Benson, Michael Jackson, Earth, Wind & Fire, the Carpenters" – and she started teaching herself how to play the piano at age 7. 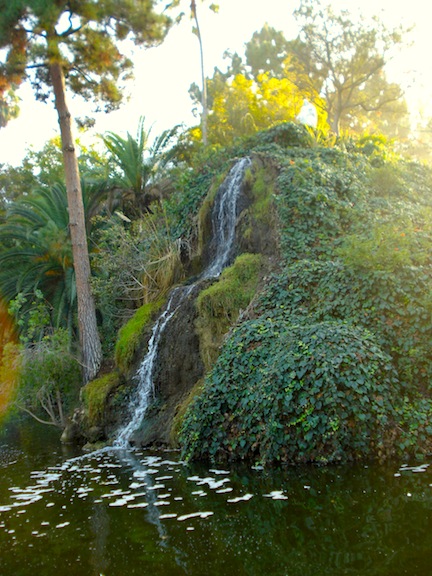 "I just made up random songs sitting at the piano. I would come up with a list of songs, and at the end of the night I would make everyone come listen to me play them, neighbors too," she recalls.

You can tell how much she loves Lake Shrine, too, as she talks of its history and meaning in her own life. When she explains how plants were imported from all over the world to create the environment, it strikes me how apt of a favorite setting this is for an artist with as wide of a spectrum of influences as NiRè. All the roses, pine trees, palm trees at Lake Shrine seem random, but they're not really. Just as NiRè is able to combine her broad musical tastes into a successful blend of her own, Lake Shrine is a harmonious collection of diversity.

"You like music if it's good, it's good. Unless you grew up in a box and only like R&B or only like rock, if you like good music then you like good music. It's definitely a mish mosh here at Lake Shrine; the most random people walk these grounds. Some days you see people from the temple with their orange garb, and you can tell they're in prayer mode. One day I saw a crew of hardened individuals. I don't know what their background was, if they were from prison or where they came from, but Lake Shrine touched their hearts. I heard them say, 'Man, this is so dope. This is awesome,' and I was like, 'Yes," she remembers. "When I first got serious about writing I would always come here. It's great inspiration."

Growing up, NiRè looked to artists like Erykah Badu and Missy Elliott for inspiration.

"I would try to get to any free concert that I could see, and I've seen Erykah a few times, especially when she first came out. For me, that changed everything. No one was doing that style of music; it wasn't even a style of music at that point, so I was like, 'Yo, she's awesome doing what she wants.' She exudes this woman power, but she's still sexy, delicate. Along with Missy, she's a
crazy inspiration."

Besides music, she also took dance classes and acted in plays.

"I was really into dance: jazz, hip hop, modern. I liked it being an active kid. If I wasn't dancing I was doing theater, musical theater or singing in a choir," she says. "My best role was in 'A Raisin in the Sun,' and I got some awards for it. Theater acting is where I got my love for the exchange that happens on stage. You give a certain kind of energy out and can immediately see if it was funny or not, if people believe what you're saying. I love that aspect of theater." 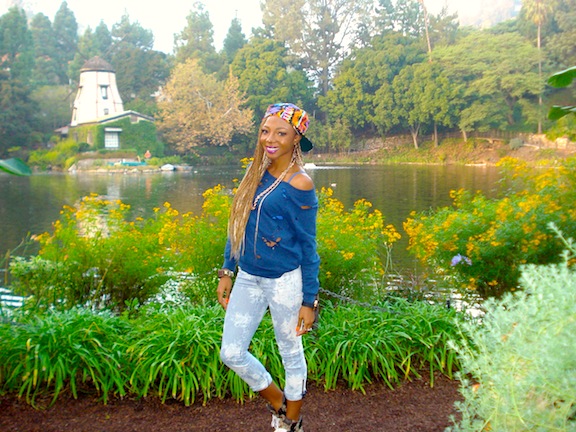 NiRè has been able to express her love for performing on stages from the Winter Music Conference in Miami to "Last Call with Carson Daly" and singing the national anthem at Clippers and Sparks games. Sports were actually another big part of her childhood.

"I ran track – that's so much of my life right there. It's not one of those sports where there's an object to the game. It's just go as fast as you can and win, that's it. It's very demanding and time consuming," she recalls. "It took a while to pry me away from track to start focusing on music because it just takes up all of your life."

The discipline she honed during those years in track, dance and theater instilled a discipline to work hard for what she wanted, specifically a career in music. As her songwriting skills blossomed, NiRè distributed handmade CD-R's all over town, and she was eventually hand picked by Timbaland for his writing team. Besides working with the aforementioned list of music hard-hitters, she also wrote "Superluva" for Mary J. Blige protege Starshell, which was produced by Fernando Garibay.

You can be sure that NiRè brings just as much fire and passion to her own material, including "Inside Out," featured on the soundtrack for the film What to Expect When You're Expecting, in her visually stimulating videos for songs like "Hella Bad" and on her forthcoming debut album, set to release on Virgin this year.

"I'm really excited about what's coming out in this next year. It's important to me to continue to grow my fan base. I really want to grab my fans, that's what brings longevity. So I want to release some more music before we go straight to radio. Things are just going to blossom from here on out, and people are going to get to know me. The dance stuff is really cool, but it's just a sliver of my personality," she says. "Music is changing, and it's changing into what I've been doing for the past year. It's more on an urban pop tip but still unique. I think what I bring to the table is a collection of different worlds. I've lived all over L.A. – from the hood to bougie parts to Hollywood where everyone's trying to hustle –  I've listened to all types of music and I'm always myself. When there's a thousand messages coming from the television and radio telling you, 'This is what's in style,' it's difficult. It's tough to be yourself, but it's so liberating."