Maybe it's from reading too many Madeline books and watching too much Julia Child on television when I was little, but I've grown up to be a total Francophile. While I studied French literature in college, fantasized about living in mid-19th century Montmartre, had many a sob session to the soundtrack of Édith Piaf and worshiped at the altar of Dior, YSL and Chanel, what I love most about the culture is the food. It's no wonder that my favorite restaurant is named for a French dessert. 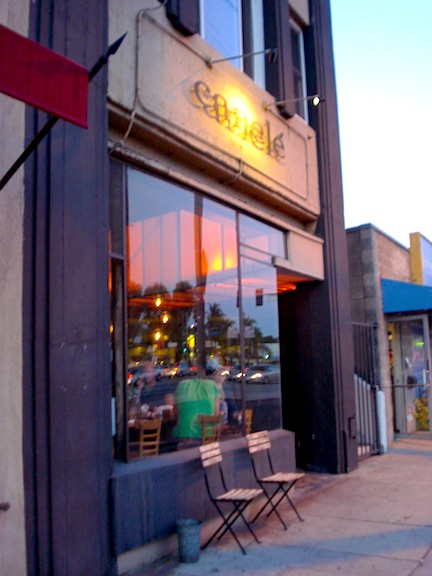 Although Canelé's menu is Mediterranean in influence, it certainly feels like a French bistro. The space is extremely small, and they serve simple, robust, earthy dishes comprised of local ingredients fresh from the farmers' market. Canelé is so small that they don't take reservations, but I've only had to wait more than 15 minutes when I've come with a  party larger than four. Usually you can grab a seat at their communal table or at the end of the bar (the perfect perch to view all of the action in the open kitchen) to avoid a wait. There is nothing pretentious about the straight-forward, delicious dishes created by chef Corina Weibel. Chef Weibel honed her skills as a sous chef at Campanile and chef de cuisine at Lucques before joining forces with General Manager Jane Choi (from New York's Balthazar and Pastis) to open Canelé in 2006.

Since then, the restaurant has consistently received critical accolades, especially for its brunch. If you're an egg person, Canelé's got you covered with Eggs in a Hole, en cocotte, Quiche Lorraine, build your own omelet or fried with pastrami hash and sauerkraut. You can satisfy your sweet tooth with incredibly thick pieces of French Toast or a Baked Pancake with tart Meyer lemon custard. I usually get a mushroom and gruyere omelet or the Fried Chicken Sandwich. Crispy pieces of chicken sit on a dollop of mayo and slices of pickled green tomatoes, which give the sandwich an unexpected acidity.

Their brunch is definitely the more affordable option, but dinner is my ideal time to go to Canelé because of two words: Pommes Anna. Paper thin slices of potato are layered into a pan with melted butter then cooked into a buttery, crisp-on-the-outside tart of deliciousness. I usually get the Bistro Steak, which is served with a side of Pommes Anna and creamed spinach. You also can't go wrong with the Boeuf Bourgignon, Salt-Roasted Branzino or Lamb Osso Buco.

I love to start the meal with the Jamon Serrano plate. The Spanish ham is sliced to order and served with Garrotxa (goat's milk) cheese, a preserved fruit (usually dates or apricots), toast and almonds. My boyfriend lives for their Chicken Liver Pâté generously smeared on a piece of toasted bread with a Dijon and parsley garnish.The Dandelion Salad with capers, parsley, garlic, croutons and sherry vinaigrette or a cup of the Seafood Soup (usually on special) are other great ways to whet the appetite. On the opposite end of the evening is a slice of the decadent Buena Chica Cheesecake or fluffy Profiteroles with chocolate sauce.

Occasionally on a Tuesday night, Choi and Weibel host a Friends Cook at Canelé dinner when professional chefs, home cooks or pals who just love to eat and share their passion for food take over the kitchen to prepare a three-course, prix-fixe meal. Past guests have ranged from Lesley Balla, Amy Seidenwurm and David Thorne to Nancy Silverton and the late Amy Pressman. The next event is Oct. 9, an Oktoberfest-themed menu from Amy Neiman and Lynn Dougherty that begins with a Ploughman's Plate (pretzel, pickles and mustard), followed by a house-made sausage with sauerkraut and buttered carrots and an orchard crisp and cookie for dessert.

No matter which night you dine at Canelé, you are always offered a free taste of the small Bourdeaux dessert that the restaurant is named for as you head out the door. Molded into a shape resembling a tall bundt cake – but without a hole in the middle – the pastry is a cross between a cake and a baked custard, with a light as air center, chewy caramelized goodness on the outside interspersed with bits of sugary crunch. One canelé is only two or three bites, and mine is usually gone before I reach the car. The canelé is a sweet ending to an evening at its namesake gem of a restaurant, a place that I will always look forward to dining at.