Whenever I have friends visiting from out of town, I take them to see the Paul Chesne Band. There is no other group whose shows represent my idea of a quintessential fun night out in Los Angeles – drinking, debauchery and damn good music –  more than the band of musicians led by native Angeleno Paul Chesne. When you come right down to it, nobody else works as hard to guarantee you have a good time.

"We don't really play venues anymore. If you're playing 12 to 15 gigs a month in Los Angeles, you can't expect people to go to the Troubadour and spend $12 to park. Or, say you go to the Viper Room with a date, you've got $10-$15 to park, $10-$15 each to get in, then with one or two drinks a piece, you're already $80 deep. It's just not sustainable," says Paul. "I'm here to promote the tip jar. I don't believe in [making money from selling] records anymore. [Although you can purchase copies of his three albums at shows.] The tip jar is good, you just put it out there. You can't do that at a venue, and most of the venues you have to pay to get into, they don't serve food. We mostly play at places where it's free to get in and there's food."

One such place is Paul's favorite neighborhood restaurant, Primitivo Wine Bistro, in Venice Beach. Known for their delectable selection of classic Spanish tapas – such as Bacon Wrapped Dates, Patatas Bravas and Tortilla Espanola – and extensive list of wines from around the world, Primitivo also hosts a popular brunch that features performances from musicians like Paul on their picturesque patio.

"They have a late-night happy hour, too [10 p.m.-11 p.m., Thursday through Saturday]," informs Paul. "My house is so close that I can walk over, and I come here at least once a week – usually more than that."

His frequent patronage of the establishment is evident when almost every staff member knows him by name. As we take a seat at the bar, Paul goes over his menu favorites.

"They're always changing the menu, so I don't really have a 'usual.' I'm trying to be a vegetarian, and the mushroom veggie burger is super good. The Falafel Pita is a great choice, as well."

Paul orders a much-needed cup of coffee since he just barely woke up after playing for nearly five hours straight at another of his local haunts, O'Brien's Irish Pub & Restaurant, in Santa Monica.

"I just left there, I think. if they saw me right now they'd be like what the fuck are you doing here now," he laughs. "Last night, the second set was maybe the best that we've ever played. It was really good. We've been playing so much that I'm trying to do this thing where we haze each other to get better. So many bands that I know that get signed, they never play. They play like once every three months. I would rather play every day, as much as I can."

What he loves best about playing: "the crowd." Audiences love it when the Paul Chesne Band breaks into one of their unexpected covers, like Prince's "Gett Off", Cee Lo Green's "Fuck You" or Britney Spears' "Toxic." The previous night's song that the band members challenged each other to learn was "Sail" by AWOLNATION. 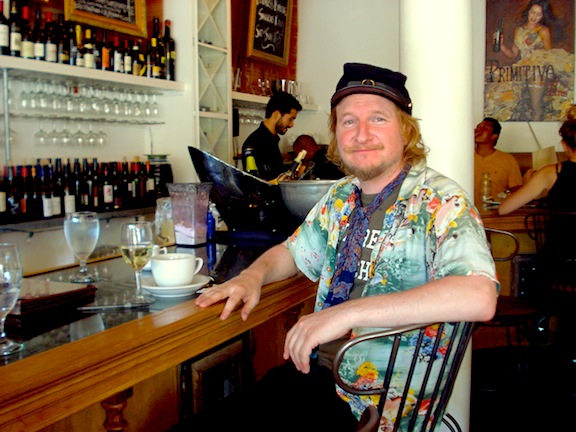 "That song is so fucking good," he says. "It's cool for the audience to see us try something new. There's something galvanizing and energetic that you can see in the crowd when they see you struggling a little. That's really the only thing that makes you grow as a musician, like when the Beatles played for eight hours a day, 300 gigs a year. You can see eight years later when they did Let It Be how good they were at playing live. They didn't even play live together for like four years in between. But the Let It Be sessions, if you watch that video, they're perfect; they didn't need overdub or anything. That's basically what I'm trying to do with my band right now."

The band is a revolving door of sorts, comprised of several talented musicians whom Paul has been playing with for years. Currently the lineup consists of keyboardist Jon Niemann, drummer Rich Berardi, guitarist Josh Norton and bassist Stephen Tegel, formerly the guitarist for the Vacation.

"Steve had never even played bass before," Paul remembers. "You just throw these people into the fire, and you can watch as we all get better individually and as a unit. I have so many different musicians on call because we keep playing every weekend, and sometimes people have to go out of town. This past weekend was the first weekend that we didn't have a gig in six months."

No matter the venue or who is in the crowd – fraternity brothers, Paul's good buddy who often participates in the shows Willie Chambers, a dancing Red Hot Chili Pepper (Anthony Kiedis) or groups of hot girls grinding against each other – the Paul Chesne Band's shows never fail to captivate. However, their recorded material is just as entertaining. Paul is a prolific songwriter, who is always honing his craft.

"I wake up with totally realized songs every day. I come up with stuff and then I tell myself, 'This is too good to forget,' and then it's gone," he says. "My friend, Malcolm, is a songwriter, and he just writes songs all day. He doesn't have them recorded anywhere, they just go away. I have SoundCloud, my phone, my iPad and Evernote on my computer. I also write stuff down on paper, and I have no idea where anything is! But we had a party a few weeks ago at my house – I have a piano and we wrote a song with everyone, and I recorded it on my phone. Someone ended up leaving with my phone, so I thought the song was gone. But the crazy thing is, the song was stored on iCloud. I plugged my phone in for the first time, and all these voice memos showed up, and there were three or four different recordings of the song."

From the debut album Wet Dog Man in 2005 to 2008's White Man's Curse and last year's PCB, Paul's insightful lyrics and soulful vocals are married with exceptional musicianship that skims the borders of straightforward rock, folk and Americana. All of his albums are available for 'pay what you want' on his website. Another commonality between all three releases is their eye-catching cover art.

Paul recalls how the PCB cover came about: "The photographer, JD Narro, did this cool thing in Photoshop, but I was like, 'Let's make it analog,' so he made this huge stencil and bought spray paint. We went to an underpass on Motor Avenue in Culver City, and we graffitied it all over. There were homeless people and cars driving by, and he had to get the photo before people started parking in front of it. People think it's Photoshopped, but JD had a tripod and we just had to stand there for a long time. All the lights are just taillights from cars going by."

Another photo from that album features the band in front of a Venice landmark, the POW/MIA memorial on Pacific Avenue. Paul has always lived on the West Side ("I grew up going to the Brentwood Country Mart, eating chicken baskets."), and has only ever lived in one other city besides Los Angeles.

"I was in Portland for three months for college. I went back to Brentwood with my tail between my legs then I picked myself up and went to Santa Monica College for a couple years," he remembers. "During that time I would go to Elvis Perkins' house like three nights a week, playing music. It's funny, if you asked us to play a song together, we can maybe play one. We were just trying to find our voices as songwriters."

One of the latest songs Paul has written is about an experience that is uniquely Los Angeles. 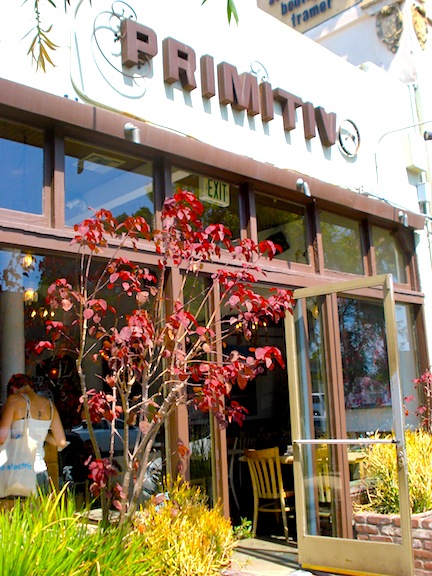 "It's kind of like Frank Sinatra 'That's Life' and Dean Martin meets Ray Charles' 'Let's Go Get Stoned,' but it's about getting tacos in the middle of the night after a gig, the post-gig burrito/taco."

But the band does try to eat healthy for the most part.

"Our studio in Los Feliz where we recorded the PCB album and some of White Man's Curse, if you stand outside the door you can see the Green Leaves Vegan sign. Our routine for a year or two, up until three or four months ago, we were at the studio every Tuesday or Wednesday. We worked, ordered food from Green Leaves and recorded. Eat vegan, that was our deal. I even wrote in the liner notes of PCB that 'I forced them to eat vegan food, we imbibed (or didn't?), hunkered down and explored the brink of our own sonic frontiers.'"

Besides Primitivo and O'Brien's, the band regularly plays at Basement Tavern and the Kibitz Room at Canter's Deli, a place that holds special significance to Paul since he's played there so much and has met many of his band members there.

"I probably went there first in high school. I have a Canter's menu that Elvis [Perkins] stuck in his pants like 10 years ago."

As for his earliest concert-going experience growing up, Paul gets a huge grin on his face at the memory.

"The first show I ever went to was the Jackson 5 at Dodger Stadium," he tells. "We were down on the field but way in the back, so we couldn't see anything. It was raining so people left early, and my mom and I walked all the way to the front. I had on little Michael Jackson glasses and gloves."

Another memory with his mom is part of why Paul has so much love for where he lives in Venice Beach.

"I don't want to give away the secret, but Venice is like 10-15 degrees cooler than most of the city," he jokes. "I love that I don't have an air conditioner, that I can walk to places like Primitivo. Where I live, if I walk to the Boardwalk and stand there, it reminds me of one of my first memories ever. I remember it was about 1980, I was 4, riding bikes with my mom. It's literally 100 yards from my house."

As we reminisce about growing up in the city, I ask Paul what personalities he can think of that are unique to Los Angeles.

"Huell Howser. Artie Vegas," he answers immediately. "Stan Chambers has been on KTLA for 60 years. I love that guy. That's an L.A. icon right there."

Paul Chesne Band performs Dec. 29 at O'Brien's and Jan. 12, 2013 at Basement Tavern. For more information, visit paulchesne.com.
Posted by Jigsaw Magazine at 9:53 AM