Rising pop artist Dylan Hyde and CEO/Founder of Dylan's Candy Bar Dylan Lauren not only share the same first name, they both have an immense love for candy. Even though the L.A. branch of the candy empire built by the daughter of designer Ralph Lauren has only been open since September, Dylan Hyde's sweet tooth has led him through the Dylan's Candy Bar doors at least five times in the past few weeks, and he doesn't even live in the city. The demands of Dylan's hectic career usually bring him to Los Angeles from his native San Diego multiple times a week, and whenever he has the chance, this candy store is his favorite destination.

"I push them to take me here all the time," he says.

The 'them' Dylan refers to is his manager Richard Allen and producer Taran Peirson, co-owners of the label that Dylan is signed to, Crissy Field Records. As we step into Dylan's Candy Bar, Richard and Taran begin to explore the store on their own as Dylan takes me through each section. It soon becomes evident how much he loves the shop because he knows exactly where everything is. From his absolute favorite sour candies (sour belts, Warheads, the Pucker Powder bottling station) and candy canes to pop rocks and the many flavors of gum, he shows me everything – even the fashion apparel section.

"I would love to get a shirt to wear, just because my name's on it," he grins.

Whether it's a pair of rain boots covered in colorful candy images or a special Dylan's Candy Bar Whirly Pop, there's something to satisfy every craving at the shop. Currently they showcase an election section with red, white and blue gum balls and presidential candidate dispensers, as well as a mustache area that Dylan goes crazy over. And, of course, there is Halloween candy galore: lollipops and gummies made to look like body parts, candy corn and chocolates wrapped in ghostly foil. I ask Dylan what he's going to be for Halloween, and his answer reveals another of his passions.

"At first I was going to be my favorite superhero from DC Comics, Flash, but they don't have any Flash costumes. My next favorite is Batman, so I think I might be him. I'm always a superhero; I have a thing for superheroes. Taran and I read comics all of the time, we keep up with all the series. The local comic book store, they know us when we walk in," he shares. "Flash is my all-time favorite, I'm more of a DC guy than Marvel, although I do kind of obsess over Spider-Man. But I love the Justice League: Superman, Wonder Woman, Batman, Flash, Green Lantern – all of them."

Although Dylan's Candy Bar is his first stop whenever he comes to the Original Farmers Market, I wonder where else his addiction to sugar might lead him. 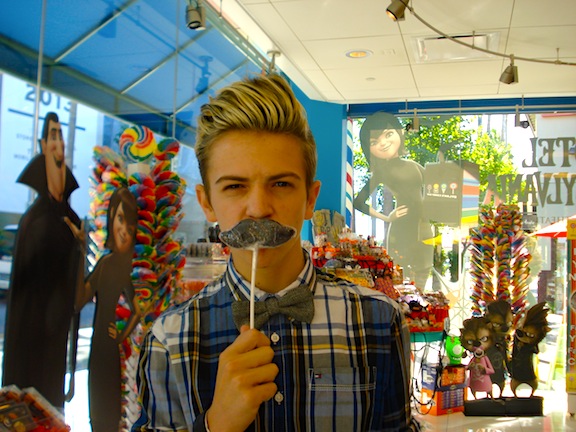 "We'll usually walk through the Farmers Market. There's a Chinese place that we go to [China Depot] and a really awesome doughnut place [Bob's Coffee & Doughnuts]. I get the old-fashioned glaze doughnuts. Right next door is an ice cream place [Bennett's Ice Cream], and obviously, I have to hit up the ice cream place," laughs Dylan. "I have this conflict all of the time: My favorite flavor is really cookie dough, but my brain says that my favorite is mint. So sometimes I have to mix them together."

Dylan has also been combining fun with his love of music from a young age when his family would go to Sunday family karaoke night at the Flinn Springs Inn near his grandparents' house.

"I used to do a song by Smash Mouth ['All Star'] off the Shrek soundtrack. I was obsessed with Shrek, I could probably still recite some lines from it," admits Dylan. "I would sing that same song every single time at karaoke for two years. I would also do Billy Joel songs, but mostly I would do that Smash Mouth song."

Although Dylan eventually grew out of the Smash Mouth song phase and began to play the piano, drums and guitar, the influence of Billy Joel has been a constant throughout his life.

"Billy Joel is my all-time inspiration. I've been listening to him since I was 4. We used to put on his Essential album with all of his hits; we would play it all day. Whenever we were in the car, that was the only thing I would ever let them play. My granddad really liked Billy Joel and would play some of his songs, like 'Piano Man,' on the piano," he says. "His songwriting is actually similar to how I try and write. When I write a song I don't do both melody and lyrics at the same time. I sit down at the piano and record with my phone, or I start singing melodies, just random things, and try to catch them. Afterwards, I plug my phone into speakers, and when I hear something I like I'll go back to it and figure something out with those chord progressions then sit down and do a melody. Or vice versa, sing a whole bunch of stuff then sit down at the piano. Billy Joel does kind of the same thing, he does one or the other. I watched some of his interviews, and there's a CD where there's about 20 people there listening to him and he sings a song and talks about how he wrote it, how it was produced, the story behind it. I used to listen to that all the time, and it's what started everything for me, with music."

Dylan began performing in musical theater productions at CYT San Diego, and one of his favorite performances there was in "Peter Pan."

"I was one of the twin Lost Boys. We had liberty spikes of hair, it was really crazy and fun. That's where I met my manager, Richard, actually. He was doing makeup and costumes for the show," he remembers. "Two years later I was doing one of my first professional shows, '13,' and Richard and Taran went to see it because they knew the director – who was the same director of 'Peter Pan.' My part had a lot of R&B vocals, and after seeing me perform, they wanted to work with me."

Besides signing Dylan to Crissy Field Records, Allen created a webseries around Dylan called "Amazed," which debuted in May. The mystery/science-fiction series was inspired by retro TV programs like "The Twilight Zone" and "Scooby-Doo," a show that Dylan is very fond of.

"When I'm at home I'll pull up 'Scooby-Doo' episodes On Demand," he says. "I like spooky, eerie stuff, but I do get scared. Ghosts freak me out, but I can't stop watching it. I like being thrilled."

You may recognize Dylan from "Amazed" or the YouTube videos he's posted of himself doing covers of Justin Bieber songs. He's also posted a video of a cover of Pink's "Perfect," which is preceded by Dylan sharing his own personal story of struggling with hearing impairments since he was born. He's undergone multiple ear surgeries, and there are two things he always turns to when he has particularly bad days. 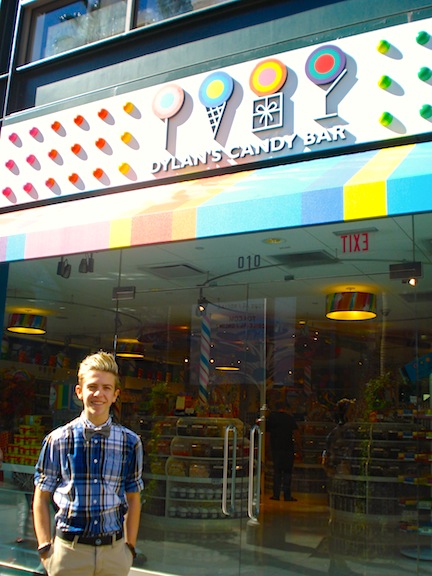 "One is Dakota, my little sister. Having a bad day, she can definitely pull me out of it. Back when I had surgeries I would be out for months, it was a struggle because at school you get annoying to other kids by saying, 'What? Huh?' all the time. I had that frustration, and music was the thing that pulled me out of the hole," he shares. "When you plug your ears and sing, you can hear it in your head. I could always hear myself singing fine. The room where I grew up playing the upright piano at my grandma's, it has a wood floor that vibrates. The sound would vibrate through me, and I could hear it. Doing music was something I could relate with. It listened to me, I could listen to it."

With singles "Love Is," "Running Free" and the recently released "Gone" showcasing Dylan's unique vocal style that fuses the influence of legendary artists such as Frank Sinatra and Joel with a contemporary flair like that of John Legend and Michael Buble, Dylan is oftentimes dubbed a "neo-crooner." "Gone," produced by Peirson and Shawn Campbell (who discovered Cody Simpson), is a perfect example of old-school swagger meets contemporary pop flavor.

"I've looked up to Shawn for a couple of years now because I was a big Cody Simpson fan. I knew who Shawn was, and when he came up to me at an event and said he wanted to work with me I was like, 'What?! Shawn Campbell wants to work with me,'" says Dylan. "My dream is also to be a producer. I want to be a record label executive besides being an artist, so being able to work with other producers is pretty cool for me. Working with Shawn and Taran together on 'Gone,' it was a great collaboration. They're brilliant."

Dylan is currently working on material for his debut album, coming next year, and a music video his next single, "Crash Into You." Angelenos can see him perform this Saturday, Nov. 3, at Pop Explosion.

"I might do a John Legend song, 'Tonight (Best You Ever Had)' [on Saturday]. I want to make sure I do stuff that new fans can relate to by doing a John Legend song that they know, then I'll do my single and maybe a Whitney Houston song," he shares. "It's a total rush on stage. In Nashville, everyone was freaking out; they had signs that said 'Dylan Hyde.' I did 'Love Is,' and everyone sang along with it. That was super cool. Things like that are awesome. You either do music, or you don't. Everyone has that thing that speaks to them. A lot of my friends, it's sports or skating. Music was just my thing, my whole family's thing really. Every single person did theater. My granddad had his own show in Vegas as a tap dancer, my grandma and granddad met each other at a show. It's in my blood, I grew up around it and it just spoke to me."

Dylan is also getting set to embark on a promotional tour to New York City, his first trip to the Big Apple. But one locale in the city will be completely familiar to him, the site where five lucky fans will get the chance to come to a meet and greet with him: Dylan's Candy Bar's flagship store in Manhattan.

"It's going to be an intimate thing, I'm going to bring my guitar and just jam with them. It's going to be fun," he says. "I love doing those kinds of things, meet and greets, because I get to be one on one with the fans."

Posted by Jigsaw Magazine at 8:34 AM