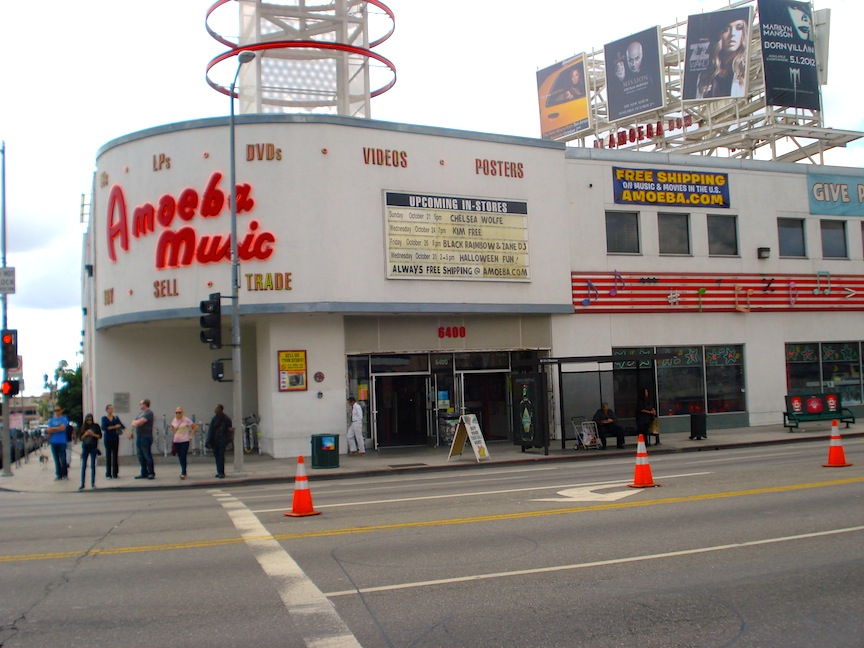 
One of the most recognizable landmarks on Sunset Boulevard in Hollywood is Amoeba Music. While the neon red logo and music notes set its exterior ablaze to catch the eye of passing motorists, most are attracted to the shop by the promise of the many treasures to be found within its walls. Established in 2001 as the third location of the chain founded by former employees of Berkeley's Rasputin Music, the Hollywood branch has grown into the world's largest independent music store. The building takes up an entire city block, and millions of CDs, vinyls, DVDs, VHS tapes, posters and other collectibles occupy its two stories.

I've spent countless hours scouring the new and used bins for titles to add to my collection, and I always look forward to seeing bands perform in-stores at Amoeba. From the Black Keys and Black Flag to P.J. Harvey and Elvis Costello, so many amazing artists have done free shows in the shop. Besides the live sets and signings, Amoeba hosts charity auctions and special events like next week's Halloween extravaganza.

Although the vast inventory of goods and incomparable concert calendar already make Amoeba stand out from other music retailers, it's the sense of community that the store fosters that truly makes it unique. The staff is made up of musicians, artists, DJs and writers, and music is their life. If you can't remember the name of the band who sings the song that's been stuck in your head for days, someone behind the counter will undoubtedly be able to come up with the name and help you find that CD. Not sure what to buy? Head to the Music We Like (staff picks) or Home Grown (local, unsigned artists) sections for a multitude of suggestions.

No one is ever looming over you, pressuring you to buy something and leave. In fact, it's quite the opposite. The atmosphere at Amoeba is so laid-back and positive, you feel like you can browse as long as you want. With holiday shopping season fast approaching, I know that I would rather spend an hour at Amoeba rather than a disgustingly crowded mall.
Posted by Jigsaw Magazine at 9:51 AM