Swag, mojo, "The X Factor" – whatever you call it, singer-songwriter, rapper, musician and producer Chris Rene has the innate charisma that is essential to superstar performers in spades. Whether you're listening to his recently released debut EP, I'm Right Here, watching him do an interview on "The Ellen DeGeneres Show" or witnessing him move around on stage, his endearing personality and immense talent are utterly captivating.

Chris captured the country's attention when he auditioned for the first season of the American "The X Factor" (The YouTube video of his audition has garnered over 21 million views.) He opened up by sharing his personal struggle with substance abuse and a moving performance of his original composition "Young Homie," and the judges were struck with emotion. Each week he moved further along in the competition, and it became clear that the viewers at home were just as enthralled with the Santa Cruz native, as their votes eventually led him to the finals. Although he didn't win the grand prize, Chris was immediately signed to Epic Records by his mentor on the show, judge L.A. Reid.

Even offstage, Chris is magnetic. As I make my way across the set of the Hallmark Channel's "Home & Family" show on the Universal Studios Backlot, I find him talking animatedly, surrounded by staff and crew. In between rehearsals for his interview and performance on the program, we take a seat on a terrace overlooking the hills of Burbank to talk. Chris' brother Gabe has lived in Los Angeles for a while, and besides the time he spent filming "The X Factor" here, he also recorded I'm Right Here in the city, so he definitely has some favorite places around town.

"I like Santa Monica and the Third Street Promenade. It's nice to go there and hang out or even walk on the beach," he says. "There are some really nice beaches out here. I just saw the movie Savages, and the beaches they filmed it on [Pacific Palisades, Laguna Beach, Dana Point] are insane. I want to go to them all. Malibu's nice, too." 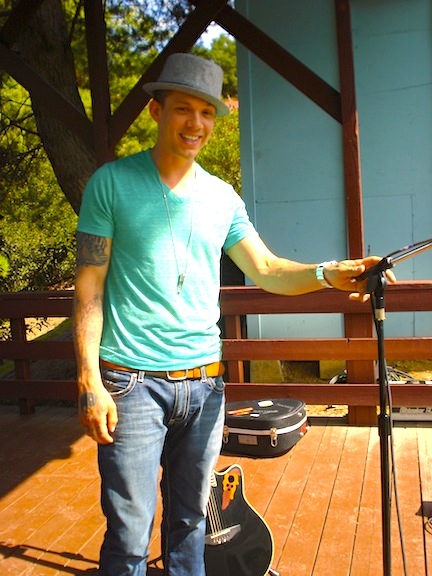 Besides hanging out with Gabe, going shopping in Glendale or Beverly Hills, Chris definitely likes to spend time outdoors.

"I like to go down to Venice to jump and swing on those bars that are on the beach. There's one set that you have to do using one hand at a time: You swing to one side, pull yourself over, then you alternate to the left, to the right [miming the monkey-bar climb]. It's a great workout," he says. "Runyon Canyon's also fun in Hollywood."

In support of I'm Right Here, Chris has been making appearances on shows like "Home & Family" all over the country. He also travelled to New Orleans, a city that is significant to his Creole background and family history, to film a video for "Trouble," a song penned by Mike Busbee and "American Idol" alum Alex Lambert.

"It was my first time there, so it was cool. It was just so humid, all day/all night. I wasn't used to that, but I loved walking around the whole city, from the French Quarter to Washington Avenue. My grandpa was raised there; it was good to get to go see some of my heritage. The food was all fried, though," he laughs. "Next time I'm going to have some gumbo. Or, I love jambalaya. I should have got some! Rice, sausage – it's the best."

No matter what city Chris finds himself in lately, his heart is always in his hometown.

"Santa Cruz is known for the skateboards, surfing, snowboards. We have Mavericks, the surf spot. My friend, Craig Comstock, is one of the filmmakers of Chasing Mavericks," he shares. "I love the Crow's Nest, which is right on the beach so it has fresh seafood. Ristorante Italiano – when you go to Santa Cruz, you've got to check it out. Also, the Shadowbrook. It's expensive, but it's good, really fancy and elegant steak and mashed potatoes."

Whether we're talking about Santa Cruz, his two young sons or what movies he's seen lately, one thing is constant: Chris Rene is capable of bursting into song at any moment. It's no surprise, since music is in his blood. He comes from a long line of musicians: His grandfather Leon René composed hits like "When the Swallows Come Back to Capistrano" and "Rockin' Robin"; His father was a songwriter and jazz pianist in the 1950s and '60s; His three siblings are all musically inclined – Gabe is a producer, and Gina's vocals have been featured on the soundtracks of films such as Mean Girls and Step Up. His passion and enthusiasm for music is infectious.

"I was always writing songs. Some people are good in school, and they love it. That's exactly what it is for me with music. That is my school. Music is my meditation," Chris admits. "There's a lyric that I wrote, [sings] 'Lord, take away my struggle. Take away my hate. Lead us not into temptation but to help us live our fate. I didn't use my education just to make it here today. This is a demonstration, making music through meditation.' It's like a prayer. It's poetry, for real."

Growing up, the Rene household was full of music.

"We had anything from Tina Turner and Al Green to Stevie Wonder and Bob Marley. My mom used to have dance parties and would play songs from artists like the Weather Girls. One of their songs was so funny, it goes [sings] 'It's raining men, Hallelujah, it's raining men.' I liked the melody, but the lyrics were so funny," he laughs. "That's the type of stuff we grew up with, all this crazy dance music and soul music, it was inspiring."

"I was 8 years old and travelled to some places to perform. It was fun. There was this one dance routine called 'Respect,' set to the Aretha Franklin song. All the girls were in robes and had mops, and I was sitting on a chair with a coffee mug and newspaper. They were sweeping, doing their thing, like 'Respect', and I was the disrespectful guy. It was really tough. We did it at Disneyland and at a competition in Sacramento where we won a medal," he remembers. 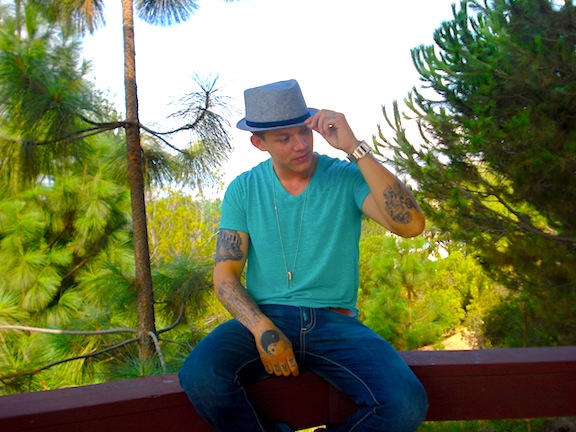 Chris taught himself how to play the guitar and piano, and eventually formed a punk band called Diversion with his brother Mike in their early teens. It was around this time that he also began experimenting with alcohol and drugs. He soon spiraled out of control, escalating into harsher substances and spending time in jail and rehab before it all culminated in a near-fatal car accident that shook him into entering Santa Cruz' Janus Rehabilitation Center. Soon after completing the program, he decided to truly turn his life around by pursuing his lifelong passion and auditioning for "The X Factor."

Chris has been sober for a year-and-a-half and remains dedicated to not only helping himself through music but helping others.

"There are a lot of people out there who are the same as me, in the sense that they have this disease and are trying to work through it. A lot of people need help, and I just want to help. My CD is inspirational, but at the same time it has dance-y, feel-good hits," he says. "Anyone who's suffering can listen to my song called 'Gonna Be Ok.' Anyone who has really ever thought about committing suicide can realize that they're not alone. I think a lot of people have, I've thought about it. Being a person who has been through it and who can say life's better now because I'm making good decisions, fighting my demons and loving myself. That's what it's about."

From tracks like "Gonna Be Ok," "Chains" and "Back from the Dead," Chris lays his personal experiences out there for the world to learn from. His with an all-star team of producers on I'm Right Here that includes Claude Kelly (Akon, Britney Spears, Bruno Mars), Chuck Harmony (Ne-Yo, Rihanna, Mary J. Blige), Supa Dupa (Eminem, John Legend, Christian Rich (NERD, Lupe Fiasco) and Soulshock (Usher, Bruno Mars) has paid off with the effort landing on the charts throughout the world. Through the ups and downs of creating the EP and in everyday life, Chris finds strength from one source.

"Faith. It's just faith, plain and simple, knowing that things are going to get better and believing it," he says.

Chris looks forward to the coming months of promotion for I'm Right Here and, beyond that, to possibly acting in some films and creating his own fashion line. He is an avid lover of the gangster genre, but I when I suggest taking on some action/comedy roles in films like those of Will Smith, he is thrilled at the idea.

"I love that, even a Hitch-type movie. I could do a Hitch," he says with a grin. "As for the clothing line, it would go from skate shoes to nice jeans to sweaters, hats and shirts."

For now, though, Chris Rene is content to focus on the music.

"It's all about making music that's going to inspire people to do better, to do their best, to not give up. For my sons, that's [the message], too. To make friends, be an inspiration, be a role model. Everyone can be a role model, if they choose it."