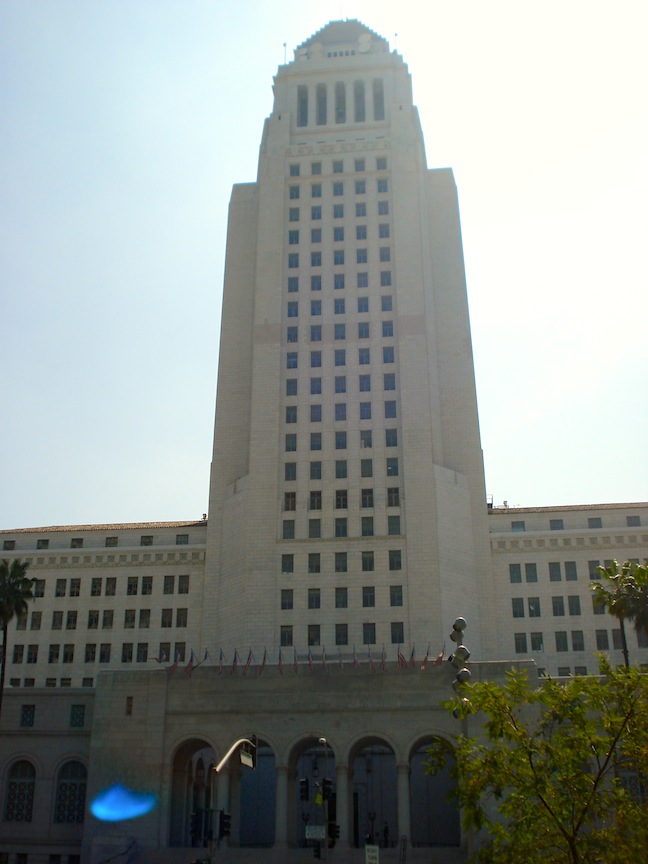 
Often when a film is set in Los Angeles, one of the first shots to establish location includes City Hall.  From L.A. Confidential and Dragnet to television shows ("Perry Mason," "Alias"), video games ("L.A. Noire," "SWAT 3") and even on the face of the LAPD badge, its recognizable tower – modeled after the Mausoleum at Halicarnassus, one of the Seven Wonders of the Ancient World – looms over Downtown. Designed by John Parkinson, John C. Austin and Albert C. Martin, Sr. and completed in 1928, the building boasts 32 floors and at 454-feet high is the tallest base-isolated (for earthquake protection) structure in the world.

Besides providing a home base for the mayor's office, City Hall also houses the City Council Chamber and offices for its members. The building's interior features Byzantine details, ornate ceiling and floor tiling, marble columns and California Redwood beams. The East Lobby contains gifts from other countries such as statues of Benito and Margarita Juarez from Mexico, a clock from L.A. sister city Nagoya, Japan and a Turtle Ship replica from Korea. Besides marveling at the structure's architecture and decor, the public can venture up to the 27th floor Observation Deck Monday through Friday from  9 a.m. to 5 p.m. for one of the best views of the city.

Posted by Jigsaw Magazine at 7:39 AM