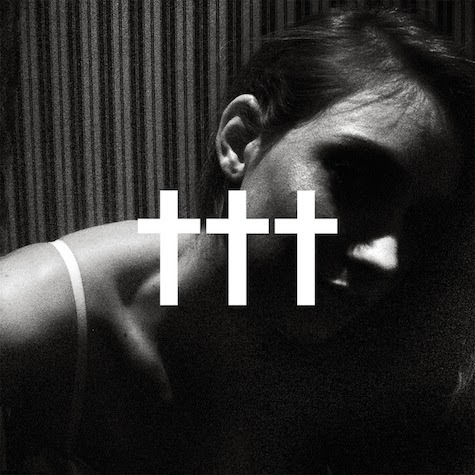 ††† (Crosses) – self-titled (Sumerian)
Finally, the self-titled debut from the trio of Chino Moreno (Deftones, Team Sleep), Shaun Lopez (Far) and producer Chuck Doom is here, and from the first bars of opener "†his Is a †rick" you fall under its spell. Moreno's multidimensional vocals that can leap from a whispered coo to a screaming howl serve as the perfect compliment to Lopez and Doom's electronically smooth yet seething-with-a-rock-snarl, lush compositions, especially on tracks like "bi†ches brew," the gorgeous "†rophy" and "op†ion." This was one of my most anticipated releases of the year, and it does not disappoint. There are songs to sit and relax to, lose yourself in the beat and dance to or simply lose your shit and sob to. If you're heading to Coachella in April, make sure not to miss their set.

Nina Persson – Animal Heart (The End)
"Love me, love me. Say that you love me." It's hard not to burst out into the Cardigans' '90s smash, "Lovefool," whenever I see the Nina Persson's or her band's name. It's been almost five years since one of Sweden's biggest pop stars from the past decade has released an album with A Camp and nine since we've heard any new music the Cardigans. In that time, the songstress and lyricist has collaborated with artists like Sparklehorse, Danger Mouse, the Cake Sale Collective and Manic Street Preachers, but with Animal Heart, she makes her solo debut. She wrote the album's 12 tracks with her husband, Nathan Larson, and Eric D. Johnson at home in Harlem with a drum machine, guitar and piano before venturing into the studio. The results are incredibly personal songs that touch on love, dreams and alienation. Cibo Matto – Hotel Valentine (Feb. 14, Virtual)
I fell in love with the Japanese group fronted by Miho Hatori and Yuka C. Honda at first watch of their Michel Gondry-directed video for "Sugar Water," off their first major album, 1996's Viva! La Woman. I became even more enamored when they released a cover of Nirvana's "About a Girl" in 1999 and with Hatori's contributions to the Gorillaz. The duo are finally releasing their first album since 1999, Hotel Valentine, of which Honda says, "Having spent some time apart, we became more aware of our magical chemistry, our magnetic bond. We both realized we had unfinished business." "Hotel Valentine is the cinematic bricolage of Yuka and me," Hatori adds. "Our medium is music. For me, making an album is like raising a child. We don't know what kind of person (story) they will end up to be." The album features contributions from Nels Cline, Glenn Kotsche, Mauro Refosco, Reggie Watts and others throughout the 10 tracks that recounts the love story between the ghosts in a hotel. See and hear the songs live at the El Rey on Feb. 24.

The Queen's Bed: An Intimate History of Elizabeth's Court by Anna Whitelock (Sarah Crichton)
I must admit that I am a voracious reader of anything to do with English history, especially the Tudors. With the popularity of the 1998 film starring Cate Blanchett (and its The Golden Age sequel), the HBO miniseries with Helen Mirren and the Showtime series, "The Tudors," my fascination is clearly shared by many others. Queen Elizabeth I and the ladies that formed her inner circle are the focus of this new book by historian Anna Whitelock. Delve into the life of "The Virgin Queen" in this intimate portrait, which has already been optioned for a six-part series by BBC Drama.

Film – All Is Lost stars Robert Redford as a man who is stranded at sea, featuring a Golden Globe-winning score by Edward Sharpe and the Magnetic Zeros' Alex Ebert; Keri Russell is a Jane Austen superfan in Austenland; The Best Man Holiday reunites the group of college friends from 1999's The Best Man; Michael Fassbender, Penélope Cruz, Cameron Diaz, Javier Bardem and Brad Pitt in The Counselor, written by Cormac McCarthy and directed by Ridley Scott; As a fan of the book and its Ender's Shadow companion, I wasn't as disappointed in the film version of Ender's Game, starring Asa Butterfield, Harrison Ford and Hailee Steinfeld, as most reviews led me to believe I would be.

Also available – The Adventurer: Curse of the Midas Box; And Then There Was You; The Armstrong Lie; Diana; GBF; Grace Unplugged; Haunter; How I Live Now; The Jungle Book (Diamond Edition); Khumba; Killing Kennedy; Life of a King; Mike Tyson: Undisputed Truth; On the Job; Reaching for the Moon; The Returned; Spinning Plates; Spirit of the Marathon II; The Summit