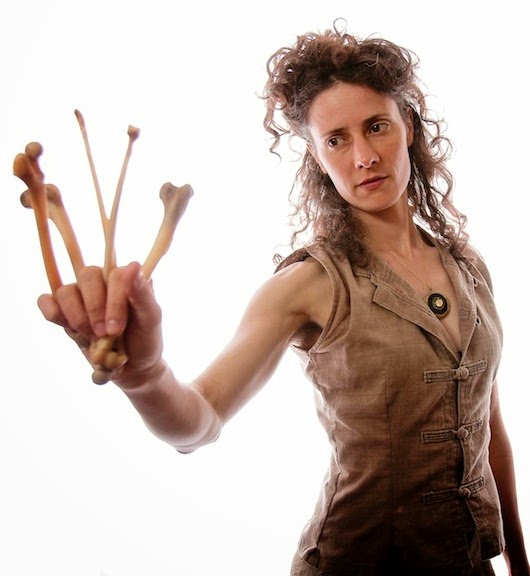 
Diane Cluck @ Echo Country Outpost (Echo Park)
I am always up for a show at Echo Country Outpost since I can just roll down the hill there from my house, but even if you live across town, seeing this singer-songwriter perform is worth the drive. The neo-folk artist is kicking of a national tour in support of her first album in nearly eight years, Boneset, which releases Tuesday. Her compositions are as creatively innovative as ever on tracks like "Why Feel Alone," "Heartloose" and "Sara." See why Cluck has been touted by Devendra Banhart and cited as an influence by Sharon Van Etten, Florence Welch and Laura Marling tonight in the intimacy of the Outpost.


Dale Earnhardt Jr. Jr. @ El Rey Theatre (Miracle Mile)
Find out why Paste named the Detroit duo of Josh Epstein and Daniel Zott one of "The 25 Best Live Acts of 2013" when they perform tonight. They released their sophomore effort, The Speed of Things, last fall to additional critical acclaim, and with one listen to infectious tracks like "Run" and "If You Didn't See Me (Then You Weren't on the Dancefloor)," it's easy to see what all the hoopla is about. They're even better and more fun live, too.

Moistboyz @ The Satellite (Silver Lake)
I am a huge Ween fan, and while that band is no more, Mickey Melchiondo (aka Dean Ween) is taking time away from his fishing business to blast into town with his Moistboyz partner Dickie Moist (Guy Heller), as well as Stephen Hoss, Nick Olivieri and Michael "Hoss" Wright, in tow. The two released their fifth album, Moistboyz V, last year, and it's as explosive, dirty and offensive as you would hope. Expect the live show to be just as in-your-face crazy.


Brazilian Carnaval @ Club Nokia (Downtown)
The theme for the 14th annual celebration is World Cup 2014 since the international FIFA competition is taking place in Brazil this summer. If traveling to a Carnaval celebration in its native country isn't in the cards for you in the near future, then this party is a fantastic substitute. With performances from Chalo Eduardo's Electrico Carnaval Band, Brasilidade, the L.A. Samba Dancers and L.A. Samba Drummers, as well as choreography by Fransini Giraldo, DJ Chris Brazil in between sets, you are guaranteed to feel transported south of the equator for the evening. Come in your finest samba outfit or favorite player's fútbol jersey and join the sizzling hot festivities.


Best Picture Showcase @ AMC Theatres (Citywide)
For those of you who still need to see some of the Best Picture nominees before Sunday's Oscar ceremony, head on over to your local AMC (Burbank, Citywalk, Santa Anita) to watch five of them in a row. There's Nebraska at noon, Captain Phillips at 2:15 p.m., Her at 4:45 p.m., American Hustle at 7:55 p.m. and Gravity at 10:30 p.m. If need to catch up on all nine nominees, then you should drive down to Orange for AMC's marathon, 24-hour event for $60. You'll have just enough time for a nap before the telecast begins on Sunday.


Dominique Ansel Pop-Up @ Barneys New York (The Grove)
The world has Chef Ansel to thank for the Cronut craze. The culinary mastermind behind the croissant and donut hybrid brings his famous creation out of New York City for the first time at this exclusive event benefitting Heart of Los Angeles. Los Angeles' queen of pastry, Sherry Yard, is helping Ansel bake stacks of Milk & Honey Cronuts topped with Tahitian vanilla milk ganache, honey jam and lavender sugar, which will sell for $5 each beginning at 10 a.m. Get there a little early to secure your place in line, because they are sure to sell out fast.


Pentatonix @ Orpheum Theatre (Downtown)
If a cappella is your thing, check out my favorite group out there, the L.A. quintet of Pentatonix. As seen from their dynamic song renditions on the way to winning the third season of "The Sing-Off," their ballads are good-chill inducing, while their more upbeat numbers are guaranteed to get you dancing. It's often hard to believe that this gigantic wall of sound is created by just five bodies; their vocal abilities are that powerful. I'm not alone in my love for PTX, either. Their Saturday show is completely sold out, and there are only a few tickets left for tonight's show so act fast or you'll miss their vocals soaring to the heights of the beautiful Orpheum.


Pop-Up Park @ The Figueroa-Riverside Bridge (Elysian Valley/Cypress Park)
EnrichLA and RAC Design Build host this pop-up in support of repurposing the historic bridge into a public park space, or landbridge, instead of just demolishing it once its wider, curved replacement is finished being constructed sometime next year. The event begins at the LA River Café (at the 24.7 marker on the river's west bank) at 11:30 a.m. where food prepared using produce from EnrichLA gardens will be served. Then, at 12:30 p.m. everyone will bike the few miles to the bridge. If you just want to join in on the park activities, bring some lawn chairs, a portable barbecue, a kite or frisbee and hang out for a while.


DA & The Jones @ The Satellite (Silver Lake)
I don't tout the Satellite's free Monday nights as much as I should, and this Monday's lineup is definitely one not to miss. The L.A. based duo of Daniel Ahearn and Mindy Jones celebrate the March 4 release of their debut album, Sirens, with a record release show featuring performances of tracks like the plaintive "Could've Had It All" and more hopeful "Make It Right." While Ahearn has enjoyed a successful solo career and Mindy has been featured on several Moby tracks, this collaboration is truly electrifying. It's as if their voices were meant to be intertwined in song.


Wes Anderson @ Aero Theatre (Santa Monica)
American Cinematheque winds up its Wes Anderson: The Life Cinematic series with a screening of his upcoming film, The Grand Budapest Hotel, that releases March 7. After the film – which stars Ralph Fiennes, Tony Revolori, F. Murray Abraham, Adrien Brody, Tilda Swinton, Owen Wilson and, of course, Bill Murray and Jason Schwartzman – there is a discussion with the visionary director and screenwriter. If you aren't able to score tickets to tonight's event, some of his other films screen on March 3 (Rushmore, with Matt Zoller Seitz signing copies of The Wes Anderson Collection) and March 4 (a Bottle Rocket and The Life Aquatic with Steve Zissou double feature).

Posted by Jigsaw Magazine at 11:26 AM