Whether it's to pick up some cables, to have a pedal repaired or to be able to play a highly coveted instrument for an hour, most L.A. musicians have spent time at Guitar Center's first and flagship store. When it comes to the Ventura-based foursome of Galvanized Souls, a stop at the retailer's 29-year-old location, which is less than a mile from the Sunset Strip, is always mandatory.

"I just love to look at shiny guitars," coos lead vocalist/guitarist Zakk Silveira when we walk through Guitar Center's doors and are immediately faced with stands of beautiful instruments. It's apparent that each of his fellow bandmates – lead guitarist Chris Traylor, bassist Matt DeMartini and drummer Kevin Cogen – would love to make a beeline to their respective instrument's section as Zakk admits, "Sometimes, I just frolic around everywhere."

Even if you aren't musically inclined, it's impossible not to be awed by the vast amount of inventory covering the store's walls. We wind through the stands of instruments, and the members of Galvanized Souls find it hard not to comment and on each instrument that captures their attention.

"We love to look and try new things," Chris comments. "I really like all the effect pedals because we try to make every song sound different, have a different vibe. 'Kingdom of No One' has a disco sound and 'Behind Green Eyes' is very pop punk, while 'Shut You Down' and 'Fall of Icarus' have more of a grunge aspect. It's all from us wanting to push our music and experiment. You can also hear how something from the past has inspired us."

All of the songs Chris mentions appear on the group's debut self-titled EP that released last fall. Since forming in December of 2012, Galvanized Souls have also been a featured ReverbNation artist, received Beat 100's Ultimate Musician Award and won the 2013 Thousand Oaks Teen Center Battle of the Bands. All of the band members are still in their teens, yet they possess a maturity illustrated by the thoughtfulness, firm passion and dedication they put into their craft.

This love for music is apparent as they check out Guitar Center's Rock Walk. Music aficionados travel from all over the globe to see the Rock Walk inductee plaques of artists that include Kurt Cobain, John Lennon, Dimebag Darrell and Elvis Presley. Galvanized Souls see how their hands size up to greats like Les Paul and Peter Criss in the collection of cement hand prints. Window displays boast memorabilia, such as photos from Guns N' Roses' first show, a Steve Gadd drum kit and the guitars of Jimmy Page, B.B. King and Eddie Van Halen. There is a homemade guitar from Bo Diddley that immediately reminds me of Galvanized Souls' love for customizing their own instruments.

"We like creating things, taking apart guitars and putting them back together like a Frankenstein type of thing," Chris offers.

Chris, Zakk and Matt were all able to explore this fascination when they attended Ventura County's Architecture Construction and Engineering High School. The idea for part of the band's name was even hatched from a box of galvanized nails in the school's shop.

"Since I was a kid, I would absolutely love building stuff or getting a radio and taking it apart," Zakk tells. "Finding out how things work has always fascinated me, so having the tools to do that at ACE made things like figuring out the wiring on a guitar so much easier."

The Galvanized Souls axe men obviously love playing guitars just as much as they like taking them apart or modifying them. It seems like they were all fated to pick up the instrument. 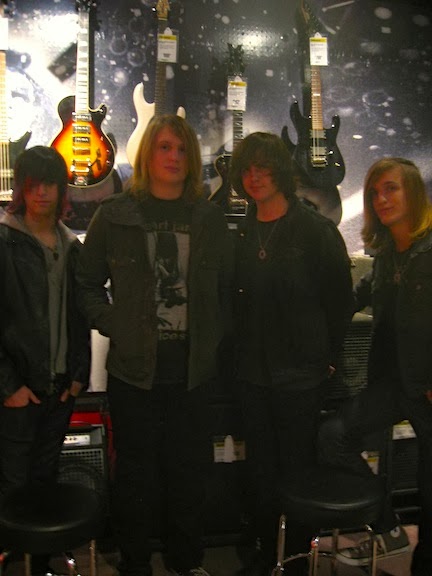 "The first guitar I ever picked up was a plastic toy for 'Guitar Hero,'" Chris recalls. "I had a lot of fun playing; I really liked the feeling of hearing music coming out of it. It made me want to get a guitar."

"In middle school I was very much into poetry. I liked how sentences sounded when they rhymed. I liked doing it all the time," Zakk jokingly starts to rhyme. "It's so much easier to write lyrics when you have something to write them to, so I learned guitar. And, I am named after Zakk Wylde. My dad was into Ozzy Osbourne and Black Label Society."

"My parents always listened to music. I grew up listening to rock and other genres, and then I started playing an instrument by myself and stuck with it ever since," Matt remembers. "Then, I thought Ross Valory, the bass player from the band Journey, was awesome. I was playing guitar, but he was the one that made me switch to bass."

Kevin also found his musical calling at an early age, too.

"Ever since I was an infant, my parents would play Chicago and I would go to the mirror and air drum or air guitar. They knew that they had a musician on their hands, and they didn't know what to do with me," he says with a laugh. "I was in my preteens when I realized, 'hey I can actually do this, I really love this. I grew up listening to the Beatles, the Beach Boys, Herman's Hermits – all the great '60s and '70s bands – so it was a dramatic change for me, because I went from listening to the Hollies to finding Escape the Fate, which is a completely different genre. Dying Is Your Latest Fashion, was the album that really changed my outlook on music. After I dove into that type of music, I found bands like My Chemical Romance then discovered the grunge scene. Nirvana swept me away, and then the Foo Fighters."

Besides music, Zakk and Kevin share a love for "Doctor Who" (David Tennant is Zakk's favorite), while Matt and Chris just finished watching the entire series of "Breaking Bad." Chris is an avid Star Wars fan, and Kevin can't resist taunting him with a gibe that the "Doctor Who" Time Lords could give Star Wars a run for its money. When I ask if any of the band members surf Ventura's great spots, Kevin is the only one who says he used to "and then I became a drummer and can't have my limbs being bitten off by a shark." All joking aside, it's clear that the foursome are completely focused on their music.

"We usually hang out at Rock City Studios in Camarillo," says Matt.

"Rock City is pretty much our home venue. It's like our own little Whisky a Go Go. It's a great environment, and a lot of bands play there because it has great sound, great staff and the audience that comes there is very responsive."

If they're not at Rock City for a show, then they're in their rehearsal room practicing or writing new material. The band is pretty casual when it comes to a songwriting process.

"With some of our songs we try brainstorming together and we'll get an idea down, but other times, one of us will have an idea already then share it with the others," Chris explains. "If it's good, we'll say it sounds cool and then suggest, 'He can do something to that part, I can do something to this part.' Whether it's with the lyrics or melodies, it becomes a group effort."

A song that isn't on the Galvanized Souls EP, but has become a popular track that they perform, is a cover of Cher's "Believe." The hard-hitting cover's story began when Zakk installed a vocal box pedal with Auto-Tune on his guitar. 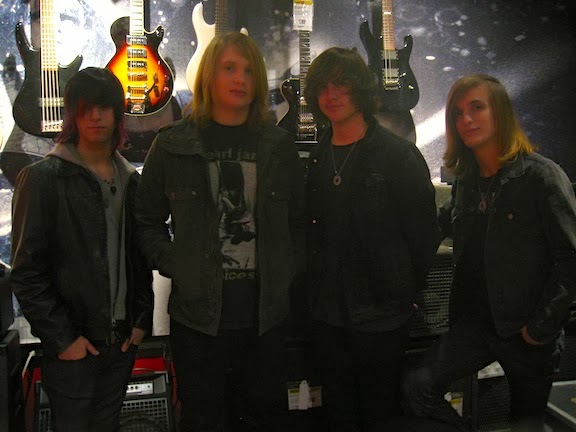 Kevin says, "He decided that he wanted to sing the chorus to 'Believe,' and it sounded exactly like the song."

"It started out as a joke, but then we started playing it and people really liked it. During that time, we started noticing that some of our fans had been having troubles with bullying or problems at home with their family," Zakk continues. "We decided to make a music video for it, a public service announcement video. You can get through this, you just have to believe in yourself."

Along those lines, Galvanized Souls just played the No Bull Music Showcase at the Joint in Hollywood, in support of the Great American No Bull Challenge dedicated to empowering teens to stand up to bullying. Whether they're performing as part of an event festival or a headlining gig, they strive to put on shows that stand out all others.

"We want to give as much energy as we can because we are performers, entertainers," says Chris. "That's what we need to do: entertain the whole crowd."

"People come out to see and hear a good show, so you have to give them their money's worth." adds Matt.

Kevin chimes in, "You have to give them both sides of the sword: good sound and good visual. You can't have every song look or sound the same. You have to think of ways to be interactive with the audience and spice it up to keep them going."

Along with numerous shows throughout Ventura county, the quartet have played at the House of Blues, Troubadour and Canyon Club, where they have an upcoming date on May 8. But their favorite so far was at the Roxy.

"It's the Roxy because of the curtain," Chris says. "We were on the stage getting ready to play. The curtain rose, and we started the song.

"Usually there's that moment where you're setting everything up, and people are watching you so it feels like you're starting the show," Zakk adds. "To have a curtain rise when the show starts – it's more real, more intense."

Speaking of intense, we decide to venture down into Guitar Center's vintage room that also serves as the set for the "Guitar Center Sessions," which has featured performances from the likes of Jane's Addiction, Buddy Guy and Weezer.

"Let's go see how expensive a guitar can get," Kevin comments. "You just have to love the smell of a vintage, acoustic room."

Zakk finds a particularly unique, gold glitter Italian guitar and exclaims, "What is this sorcery?!"

Amidst all the fun as we stare longingly at all the pricey guitars, I ask if the guys have any other places in Los Angeles that they like to visit.

"We really like eating over at the Rainbow because of its great atmosphere," Chris replies. "The rock scene is there, and it's fun to watch all of these '80s looking people there. We'll probably go have lunch there after this."

The band recall a particularly fun visit to the City of Angels for a recent Dead Sara show at the El Rey. That group's bassist, Chris Null, actually did a remix of the first single from the Galvanized Souls EP, "Shut You Down" and stars in the video for the song.

"It's a prequel to the original video for 'Shut You Down,' and was shot by Jared Sagal, who has directed all of our videos," Matt informs.

"[Jared] helped us produce our EP with Luke Tozour," adds Chris. "They're working on our new tracks with us, too."

While we're waiting for more new music from this talented young band, Galvanized Souls have a slew of upcoming shows scheduled, including one in Mesa, Ariz. They perform Feb. 15 & April 5 at the Vault, Feb. 21 at Rock City Studios, Feb. 22 at the Chop Shop, March 8 at Rock & Roll Pizza and May 8 at the Canyon Club.