At Heywood: A Grilled Cheese Shoppe


It's always a bit daunting to walk into an interview with bandmates who have been friends since childhood. There are inside jokes and nonverbal cues passed across tabletops that can go right over your head. Perhaps it's precisely because they've spent so many years together that their natural ease with one another becomes contagious, and after a spending just a few minutes with Torches vocalist/guitarist Azad Cheikosman and drummer Eric Fabbro, laughter is inevitable.

"I moved next door to this guy in 1998 in South Pasadena, and we've been best buds ever since," Azad begins. "We started a band called Dollar Division back in the day, and that was a very garage sort of project—"

"Yeah, recording a demo in the garage, setting up the computer and the board on my parents' washing machine – it was terrible, but fun," Azad continues. "And, it got us where we are today."

"We bonded more once we started playing music, but we were skater kids, too," Eric tells. "We would spend hours in front of the house practicing our ollies and kickflips off the curb."

Although their skater days are behind them, the two friends still share a mutual love for music expressed through Torches. They released a new EP, If The People Stare, in May and are set to co-headline the Echoplex this Friday with the Lonely Wild. They have been in the studio working on a sophomore album, but took some time out to meet at one of Silver Lake's most unique restaurants, a place that only serves grilled cheese, Heywood.

Owners Mike Kaminsky and Brian Robillard, who also work in music management and the television industry, turned their shared passion for food into a successful sandwich shop that specializes in throwing the notion of plastic-wrapped yellow cheese between two slices of white bread out the window. You can find French- (Bon Appetite Brie), Italian- (Caprese, Italian Bleu Jeans), Latin- (Muy Caliente) and even Presidential- (Bill Clinton's Epiphany) inspired creations at Heywood, which takes its name from English poet/playwright John Heywood, a noted cheese lover (see his Epigram 92 ode to cheese here). 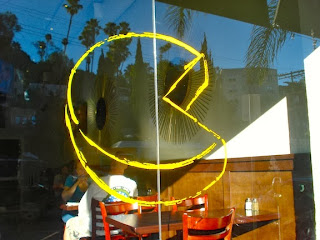 The gourmet grilled cheese shoppe opened as an outlet for two friends' food love seems like the perfect fit for Torches, formed from Azad and Eric's shared interest in music that they discovered at a young age.

"I started playing guitar because I saw my uncle play at family gatherings. He was always the guy hiding in the other room playing," Azad recalls. "I guess it was his way of unwinding because it would get really loud since I have a really big family. Everybody's always loud and rambunctious, so it was nice to disappear from that and see him play. After a while, I wanted to do it, too."

"My dad said he used to put headphones on my mom's belly [when she was pregnant], and he would put on Led Zeppelin. He says that I used to like to dance to Chuck Berry when I was a toddler. I just liked banging on things," Eric remembers. "I'm kind of a spastic a guy, you can't tell from first impressions because I'm pretty shy. I also found out that my mom's uncle was a really prolific drummer back in the 1930s and '40s. I didn't know that until after he passed away, it's interesting."

As they grew up, Azad and Eric began forming musical tastes and became inspired to create songs of their own.

"The bands that really inspired us to play music were the Pixies, Radiohead, Nirvana. Seeing that sort of natural ferocity and empowerment on stage was something that made us want to do the same. We did a lot of covers at first, which was fun, but after a while we wanted to make our own music," Azad shares. "[Our songwriting] bloomed from doing covers. We would emulate things that we liked and then we started to get into habits of our own and roll with them. A lot of it was spontaneous or stream of consciousness, a lot of the lyrics didn't make sense when we first started. This new album that we're making is sort of like me looking in the mirror and trying to evaluate who I am and fight my own demons, but back then, it was us being dickhead kids and telling stories, trying to be pretentious."

Their first show was at No Future Café in Pasadena, the only all-ages venue they could play. They would perform in cafés, backyards and even at the South Pasadena Farmers' Market.

"We used to set out a hat and play there. We actually made pretty good money; that's how we paid for most of our recordings when we were younger. I even bought a Coachella ticket with the money once. If you're going to busk, do it in South Pasadena," Azad laughs.

They eventually became part of the fivepiece, Torches in Trees, which they turned into a trio called Torches in 2011. They released a debut album, Heads Full of Rust, and quickly began garnering praise from the likes of L.A. Weekly, the BBC and Filter for their high-energy shows (with Braeden Henderson on bass) across the country and a monthlong residency at the Echo last May. One of those nights featured the addition of strings for a set that included covers of one of their favorite bands, Arcade Fire. 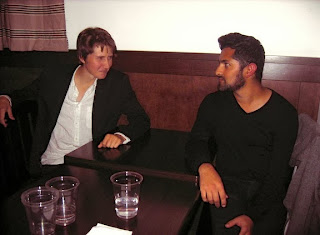 "They're successful at trying to be ambitious," Eric says of the Canadian band. "You shouldn't knock an artist for trying new things. You can't go to the same artist for the same thing all the time."

"You just have to be willing to accept change," adds Azad before sharing one of his other current musical obsessions, King Krule. "He's only 19, and what he's doing is so captivating. When I look back at being 19, I wasn't talented like that. It's not contrived: He sounds like he's been doing it for 20 years"

"It's really natural with him," Eric chimes in. "It's rare that you get someone that young finding their voice."

It's not as if Torches are such old geezers themselves, although they've been playing so long together it would be easy for them to feel like old timers. Over the years, they have become naturally attuned to each other's thoughts, which is a valuable asset to have as a creative partners. From collaborating on video concepts together to finding the right image of a wolf for the If The People Stare EP cover, their work process has a definite easy flow to it.

"I go to Art Center College of Design, so I pretty much do all the artwork for the band," Eric says. "I just found an image of a wolf and said, 'Hey, this looks cool. Let's just base the cover off this."

"I don't think the wolf initially had a meaning, it may have just been, 'I like the aesthetic of this.' But sometimes you go back and look at your lyrics, and think, 'Oh, that's what I was talking about. Maybe I was going through this in my life,'" Azad informs. "There's a song called 'If The People Stare,' and it's about wanting to not worry about people's perceptions of you, therefore the features of a lone wolf have a strong meaning."

Along with the EP's title track, songs like "When You Gonna?," which can be heard over the airwaves on KROQ and 98.7FM, and "Watched You Like a Hawk" show marked growth from their debut. If The People Stare was mastered by Jeff Lipton (Arcade Fire, Wilco, Andrew Bird) and recorded/engineered by David Newton (The Soft Pack, Henry Clay People, Happy Hollows), whom the band is working with again on their forthcoming second album.

"Dave mainly works with artists that he likes, so it's cool to have someone who is actually into your music when they're recording it. He makes suggestions here and there, but for the most part, he's pretty respectful of what artists want. He understands that we have a pretty clear vision of what we want going into the studio," Eric says. "He's really supportive and just fun to be around; he has a lot of crazy stories to tell."

"Dave has this daily routine in the studio that he calls 'beer o'clock.' We'll be doing a mix at around 5 o'clock, and he'll say, "'t's that time.' He has a fridge in his studio, so we'll start downing some beers. It's a nice way to take a load off after recording for 10 hours," adds Azad. "He's a very easy guy to work with, it almost feels like hanging out with a friend and making a record. We like a lot of the same bands, so we see eye to eye on a lot of things. It's a good collaboration."

The Torches guys get to indulge at one of their favorite restaurants whenever they're working at Newton's Burbank studio.

"Porto's is a regular spot when we're recording with Dave," admits Azad.

"The chicken croquettes are awesome," interjects Eric. "They have a lot of pastries there."

"The sandwiches are good too," says Azad. "Everything there is good."

Whenever they are in a new city, they love exploring all the sites by going hiking and finding locations to take some cool photographs. When they're on the road they find themselves craving two things they can't get anywhere else: the Kogi truck and In-N-Out. When I ask what else they do to unwind at home besides satisfying their taco and burger cravings, Eric, of course, mentions art.

"I draw and paint," he replies, before surprising me with his other relaxation devices. "Listening to philosophical debates – Christopher Hitchens, Sam Harris, Stephen Fry – sometimes help me blow off steam. I'll watch documentaries, and one of my favorite shows is 'Cosmos.' Even today I was feeling a little depressed, so I listen to a couple of monologues that Carl Sagan did at the end of a couple of episodes. They're inspirational."

Inspiration is as important as ever while they continue work on material for the new album, of which Azad says, "In some ways we've become more concise, and in other ways there's an expansion where there are a lot more vocal harmonies."

"We're trying to relate to people more with simple songwriting that's effective, really honing in on finding the groove and making a good melody – a good pop formula," Eric continues. "We don't have any shame in saying that we're writing good pop music."

Honesty is something that they both hope transmits from their shows as well.

"I feel like when we get onstage we're able to say a lot with very little. You have a certain voice when you get onstage, there's a power that music has. When you get on stage you can really let things out and not worry about how you're perceived," confides Azad. "People like it when you just live in the moment, that's why we do it."