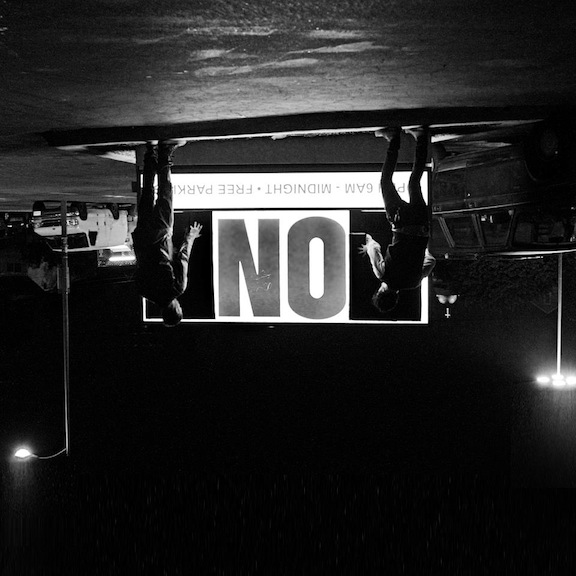 
NO @ Troubadour (West Hollywood)
The Echo Park indie rockers play their first L.A. show of 2013 tonight, and if you haven't seen them live this is definitely your can't-miss show of the week. Dancing and singing along to the fivesome's tracks, which run the gamut from to the heart-wrenching "Coming Down" to the heart-racing "There's a Glow," is the perfect way to get the week's end started off right. You don't just have to take my word for it, though. Give their video for "Big Waves" a gander for a glimpse at some of the fun the Troubadour is in store for this evening.


In Theaters This Week
Julianne Moore and Jonathan Rhys Meyers in 6 Souls; Robert Redford directs and stars in The Company You Keep with Shia LaBeouf, Stanley Tucci and Brit Marling; I can't even watch the trailer for Evil Dead, the highly anticipated remake of Sam Raimi's 1981 classic, by myself, so it's pretty much guaranteed that it's going to be a hit with horror fanatics; Danny Boyle delves into the art world with Trance, starring James McAvoy, Rosario Dawson and Vincent Cassel. Also in theaters: The Brass Teapot; Free Angela and All Political Prisoners; Jurassic Park in 3D; My Brother the Devil; The Story of Luke; Thale


Demetri Martin @ Book Soup (West Hollywood)
The stand-up comedian, actor, musician and writer is also an artist. His follow-up to the New York Times bestselling This Is a Book is a collection of hilarious drawings, poems and visual jokes called Point Your Face at This. Martin presents and signs the new book at 2 p.m.

Willy Wonka and the Chocolate Factory @ Electric Dusk Drive-In (Downtown)
The 1971 classic, starring Gene Wilder as the eccentric titular character, is still my favorite big screen adaptation of a Roald Dahl work, and there's no better film to kick off EDDI's 2013 Family Night at the Drive-In series.

The Houston quartet's frontwoman, Asli Omar, is the epitome of cool. Her commanding vocals paired with Adam Martinez's guitar set to the rumble of bassist Tom Nguyen and drummer Justin Martinez equals complete and utter sonic jubilation. Experiencing them in a venue as intimate as the Central is going to be quite the treat.


Juanes @ Barnes & Noble (The Grove)
The Latin music icon and dedicated humanitarian grew up in the midst of Pablo Escobar's reign over Medellín. Even though there was a civil war raging around him, which greatly affected his life – his cousin was kidnapped and executed, a close friend was murdered by gunmen – his passion for music provided an escape and release of pent up emotions. He shares these stores in his memoir, Chasing the Sun, that was released last week, and he signs copies of the book tonight.


Debbie Reynolds @ The Egyptian (Hollywood)
The beloved actress just released a memoir, Unsinkable, which picks up where her first, Debbie: My Life, left off. American Cinematheque celebrates the release with a double feature of two musicals starring her – 1952's Singin' in the Rain and 1964's The Unsinkable Molly Brown – as well as a discussion with the screen legend herself. There's also a double feature of her films The Tender Trap and Mary, Mary on April 4 at the Egyptian, too.

Free Cone Day @ Ben & Jerry's (throughout Los Angeles)
I am addicted to ice cream. It's my absolute favorite food, so Free Cone Day is always circled on my calendar. Ben and Jerry have been holding the holiday since their company's one-year anniversary in 1979, and this year they add new flavors like Candy Bar Pie and Liz Lemon Greek Frozen Yogurt to their lineup of classic flavors, which are all available for free!


Ménage @ The Viper Room (West Hollywood)
The trio of siblings (Gabriel, Fernando and bELA Ferreira) spent their childhood living in Toronto, Canada and a small town in Portugal, infusing their musical tastes with a myriad of influences. As they moved into adulthood, spending time apart in settings such as New York and Los Angeles, they cultivated their musical passion and skills and eventually came together to form Ménage and release a self-titled debut. Experience the fruition of their labors as they celebrate the release of the video for "Promises," their third single from Ménage.

Heloise & The Savoir Faire @ The Satellite (Silver Lake)
The New Yorkers swing into Los Angeles in support of their just-released sophomore effort, Diamond Dust (via Elijah Wood's Simian Records). If you haven't been dancing around your house to the album's first single, "Vibezz," in preparation for the show, then get to it!


San Cisco, Chaos Chaos @ Troubadour (West Hollywood)
This marks the Australian four-piece of San Cisco's first headlining tour in North America. While the release of their Awkward EP last year has steadily increased their buzz throughout the states, it's also built up the anticipation for their full-length's release later this spring. Joining them on the tour are the Saaverda sisters, Asy and Chloe, formerly of Smoosh and currently making waves as Chaos Chaos. They just unveiled an EP, S, and promise the incorporation of "the Toys R Us Big Piano, a trash drum kit and vocal processors" into their live set. Should be a thoroughly entertaining evening.

Posted by Jigsaw Magazine at 11:59 AM