Bradley Hanan Carter of NO

BRADLEY HANAN CARTER of NO


Anyone who gets to know Bradley Hanan Carter soon learns of his passion for music and his obsession with coffee. So when I ask the New Zealand transplant to name his favorite spot in his neighborhood, it's only fitting that he replies with a café: Silverlake Juice and Tea.

From its unassuming storefront, Silverlake Juice and Tea seems like your average juice bar/coffee shop, but after grabbing a cup of his usual Coconut Latte (containing sweet bits of freshly shaved coconut) Bradley leads me past three grandiose archways into the heart of the place – a beautiful courtyard full of wooden tables and chairs, lanterns and camel statues. Having opened just over a year ago, the café shares the outdoor space with the Indian-Mexican street food restaurant next door, Cowboys & Turbans, since they're both owned by chef Baba Ji. 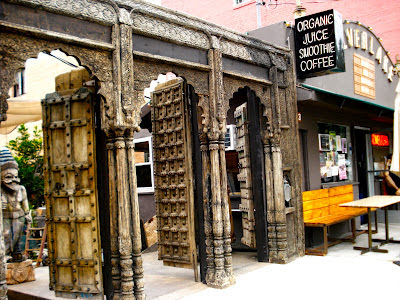 While organic juices and ingredient-packed smoothies are $5.50-$7, a large cup of coffee or tea is just $2. Silverlake Juice and Tea also offers a small selection of food items – sandwiches, salads, muffins. After seeing the courtyard, speaking with the friendly baristas/juicers behind the counter and glancing at the tongue-in-cheek drink names (Cacao Me Crazy, J-Bieb, Happy Hippie), it's clear why Bradley loves it here.

"I just live about a five-minute walk up the road [in Echo Park]. I've come up with really good lyrics here just sitting in the sunshine and taking in the atmosphere," he shares. "I like to get out of the house since I record and live in the same place. It's nice to get out and have a little walk down the road. This is a good place to meet everyone, it's easy to get to. There's not too many sanctuaries like this around Silver Lake, where you can just go and sit somewhere and kind of hide away if you want. I could sit here all day, have a few coffees and work on stuff – write, read e-mails, do whatever I have to do."

Besides hanging out at Silverlake Juice, vocalist/guitarist Bradley has been hard at work with his band NO. Formed in 2010 with bassist Sean Daniel Stentz, guitarist/keyboardist Reese Richardson, drummer Michael Walker and keyboardist/guitarist Ryan Lallier, the group decided to spend a year writing before recording their debut EP, Don't Worry, You'll Be Here Forever, entirely at Bradley's house on Mohawk Street.

"We wanted to write some songs we could believe in. We wanted to create some hope because it had been a really hard few years for all of us. I think when you can put some sort of hope in music, then other people maybe can feel that too," says Bradley. "Music really is the only thing that is always there for you, no matter how shit things get." 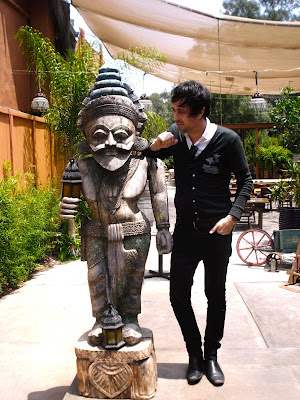 Once the EP was recorded, NO began to perform publicly. Their first show was Nov. 9, 2011 at the Satellite, and with the EP's release, a Monday-night residency at the Echo, a West Coast tour and performances at SXSW all last March, they haven't stopped since. Garnering attention from L.A. Weekly, KCRW and Time magazine, NO is steadily building a solid fanbase while doing everything completely on their own.

Overall, Bradley loves Echo Park for the cafés like Silverlake Juice and Tea, as well as the kinship he feels with other residents.

"This neighborhood is really good because you can just walk out, have a drink and go see a show. I love the Monday night thing [the free Monday-night shows at the Satellite and the Echo] because there's always a band playing," he says. "It's a really good community of artists and music, and everyone's pretty chill."

"There's a lot of people doing really good things, and it's inspiring when you go out and see your friends doing well. It makes you work harder. I think we're all kind of in the same boat here. Nobody's really showy. No one's got like lots of money, and if they do, it's not about that. It's not about what you've got and what you've done. It's more about who you are," he continues. "It's the first time I've felt that in L.A. to be honest. Most people here [in Echo Park] are just doing their stuff because it's what they want to do. It does create an honesty, and I've really enjoyed that. I mean none of us have got any money, we're just doing this because we love it [laughs]. I love when we play a show and people sing along – that's getting paid."

NO's video for "Stay With Me," directed by Ryan Reichenfeld:

Posted by Jigsaw Magazine at 9:50 AM