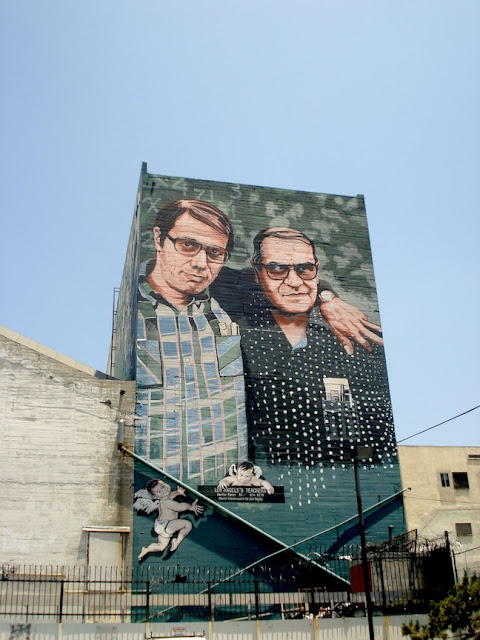 Overlooking the Yoshinoya parking lot at the northeast corner of Wilshire Boulevard and Alvarado Street across from MacArthur Park stands Héctor Pónce's 1997 mural entitled Los Angeles' Teachers. Originally from El Salvador, Pónce worked as a commercial sign painter in Mexico as he developed his artistic skills and vibrant style. After moving to Los Angeles, he began to paint murals all over the city, including the massive portrait of the Beatles, Marilyn Monroe, Elvis Presley and Arnold Schwarzenegger on the Harvey Apartments in Hollywood.

Los Angeles' Teachers is significant because it captures actor Edward James Olmos (before he became Adama in "Battlestar Galactica") with Jaime Escalante on the set of 1988's Stand and Deliver. Escalante, whom Olmos portrays in the film, was a ground-breaking math teacher at East Los Angeles' Garfield High School. Escalante passed away in 2010, but through Pónce's mural, he continues to inspire many of the city's teachers and youth who pass it every day.
Posted by Jigsaw Magazine at 10:08 AM