One of the inspirations for JIGSAW was the amount of musicians I know who are total foodies. And Bernard Yin, lead guitarist for Astra Heights, definitely loves food.

"I just finished touring Europe with a band that doesn't pay terribly much, but my primary motive whenever I tour with them is that we go to cities with amazing food. If I knew that the food was not going to be part of the package, I wouldn't do it. It's that important," he says.

Bernard meets me at one of his usual neighborhood haunts, Cha Cha Chicken, where he enjoys the Caribbean-fused-with-Latin cuisine a few times a month. His favorite dish, the Jerk Chicken Enchiladas, is comprised of the restaurant's signature Jamaican-style chicken wrapped in tortillas and smothered in a sweet, spicy mango pineapple sauce. He's also a big fan of their Aguas Frescas (seasonal fresh fruit waters). Today, he decides to try the Mulato Cubano and a blended watermelon and cantaloupe ague fresco, which is quite refreshing on this hot summer day. The sandwich is well worth the wait when it arrives. A crispy Cuban baguette is pressed around shredded chicken breast, cheese, lettuce, pickles and mustard. The chicken is juicy and so tender that little bits keep falling away from the sandwich.

Since Bernard has lived in Los Angeles for 20 years, he also loves Mexican food.

"I eat Mexican food almost every day. I've got this route, I know where to go for the best huevos rancheros, fish taco, [etc.]. There's a place called Gilbert's up on Pico – the vibe is great, and it's definitely a place where you prepare to get really stuffed. Paco's Tacos on Centinela is pretty well known. The tortillas are made right then and there. That's a very powerful thing. There's a place, a real hole in the wall on Lincoln right near Pico on the southeast corner. I go there a lot for a veggie burrito. Mariscos Guillen La Playita is fantastic and mind-boggling inexpensive. … The culture clash or the blending of cultures that you see here in L.A., it's so well exemplified when you see these taco trucks with like, the Korean taco – all these funny hybrids of food genres."

Fusion cooking is something that Bernard is used to. His mother is Greek but was born and raised in France, and his father is Chinese, so he grew up being exposed to a lot of different foods.

"My mom would make traditional Greek Tiropita – a phyllo dough triangle stuffed with feta cheese and herbs – and Spanakopita. She would also make souffles. I grew up eating rabbit in urban America. The French eat rabbit a lot, and I know the taste of rabbit very well. From my father's side I know the taste of duck. … My dad cooks very well too. He loves to prepare a slab of salmon, garnished and dressed up with a lemony, tangy element going on. He does make a mean pancake – as all Chinese people are supposed to," he says with a wink.

Another benefit of growing up in a multicultural household was a wide variety of music.

"My mother, for example, loved that Eydie Gormé album, Canta en Español, which anybody from Latin culture knows even though it's at least 35 years old. It's this amazing collection of standard Spanish love songs that you hear every mariachi play. She did it with such panache with Trio Los Panchos. So, there I was with a Greek-French mother and a Chinese dad listening to Spanish music (by a non-Hispanic, mind you!). Even to this day, it's one of my favorite records."

Bernard's love for music blossomed when his family relocated to San Diego from the San Francisco Bay Area.

"I no longer could hang out with my friends, I had no life. The guitar was handy, so I started playing a few random things. I was always listening to AM radio. All through the '70s you could turn on an AM station and you would hear an impressive variety – Sly Stone, Deep Purple, America, Helen Reddy, Olivia Newton-John, John Denver, Grand Funk Railroad and all the British Invasion and post British Invasion stuff and pre-disco Bee Gees – all on one station. As a musician it's kept me stimulated because I enjoy a variety of music. The other day I jammed with Norwood Fisher, the bassist from Fishbone, and I'm working with some projects right now that have nothing to do with the direction that he's got. The variety keeps me from getting sick of it and selling my guitar." 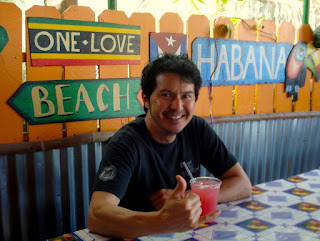 Aside from Astra Heights, Bernard has played with arrests such as El Vez, the Fuzztones, the Zodiac Club, the Animators, Pansy Division, Medicine and the MiGs. He has also produced material for Marisable Bazan and created music for film and television shows like "Dexter."

Cha Cha Chicken is just a block away from Bernard's house, as well as one of his usual surf spots.

"I surf almost daily. My favorite spots aren't always the nearest, sometimes you have to settle to just get some surfing under your belt for the day. Out of convenience I surf right here at Bay Street and the waves are semi-decent there often enough, and it's walking distance. It's so rejuvenating and stimulating. As far as L.A. goes, all the way up the coast there are different spots. Sometimes it's good at Zuma, sometimes it's not. Sometimes it's good in Malibu, sometimes it's not. The list goes on. They call it a Surfing Safari because you're looking and hunting for a wave."

Another of Bernard's passions is fishing, which he got into from spending a lot of time around water with his dad, an underwater marine photographer. The self-proclaimed "obsessed angler" also loves the artistry of making his own flies. Besides working a day job in marketing, composing instrumentals for licensing and performing with bands, this modern-day Renaissance man certainly deserves to enjoy his downtime eating good food, surfing and fishing.  What else does he do to relax?

"I sleep. Almost every day I take a nap. That's huge!"