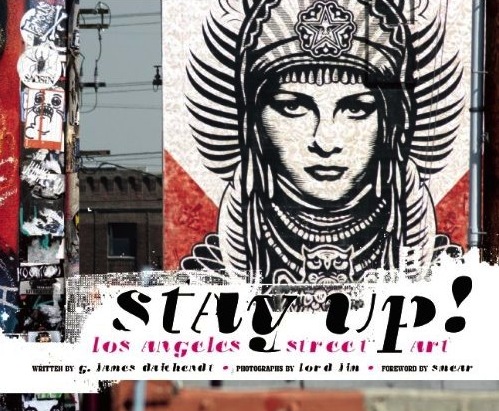 
G. James Daichendt @ Book Soup (West Hollywood)
The Azusa Pacific University Professor of Art History presents and signs Stay Up! Los Angeles Street Art, which was released at the end of last year. The book explores the phenomenon of street art through interviews with several L.A. artists. Besides investigating the differences between graffiti and street art, Stay Up! also goes into the major themes of the L.A. scene and presents beautiful photos by Lord Jim.

Los Angeles Bacon Festival @ Petersen Automotive Museum (Mid-City West)
VIP tickets to the inaugural event are already sold out, but you can still be added to the wait list for general admission ($40 for 3 p.m.-6 p.m. admittance). You don't want to miss the celebration of all things bacon, with dozens of restaurants and bakeries presenting their sweet and savory best. Admission also includes access to check out all the cool cars housed in the Petersen.


Ellie Goulding, St. Lucia @ The Wiltern (Koreatown) Shervin Lainez
Make sure to bring your dancing shoes to this one, as no one encourages you to lose all abandon and just sweat out all of your frustrations on the dance floor like these two. Goulding and St. Lucia's Jean-Philip Grobler do electro pop right and should make for quite the evening to remember. The pair also perform at the Palladium on Tuesday.


Noodle Bowl Fest @ Viceroy Hotel (Santa Monica)
Noodles are one of my favorite comfort foods, and if you appreciate them as much as I do, this is your event. For $55 you get seven types of soup noodles, beer and cocktails, with proceeds going to My Friend's Place. Restaurants providing the oodles of noodles are Din Tai Fung (Taiwanese Beef Noodle Soup), Maximiliano (Filipino Chicken Noodle Soup), M.B. Post (Vietnamese Oxtail & Beef Brisket Pho), Rodded (Thai Duck Noodle Soup), Seoul Sausage (Korean Army Soup), Tsujita LA (Japanese Tsukemen) and Whist (Korean Noodles).


VH1 Save the Music Foundation Young Benefactors Benefit Show @ The Mint (West Los Angeles)
VH1's non-profit organization promoting instrumental music education in public schools presents an evening of amazing music. From the rocking jams of the Parlotones, LaZae and the Moon Shines to the smooth tunes of Jason Joseph and Isabel B, there's something for everyone. And your admission fees directly support Save the Music.

Posted by Jigsaw Magazine at 3:29 PM