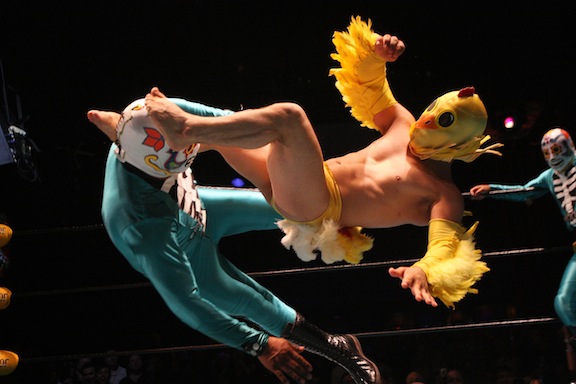 
When Harry Met Sally @ Electric Dusk Drive-In (Downtown)
If you're in the mood for something a little more traditional, then head on over to the drive-in for Rob Reiner and Nora Ephron's classic rom-com starring Billy Crystal and Meg Ryan. If you aren't able to snag any day-of tickets, you can still grab a seat in their Outdoor Astroturf area right in front of the screen. Just bring a lot of blankets to snuggle with your Valentine.

"Jekyll & Hyde" @ Pantages Theatre (Hollywood)
Former "American Idol" contestant and Tony Award nominee (for "Rock of Ages"), Constantine Maroulis, assumes the lead role opposite R&B singer Deborah Cox (remember "Nobody's Supposed to Be Here" from the '90s?). Let their performances of classics such as "This is the Moment" and "Someone Like You" pull you into the dark and dangerous love story. Performances at 2 p.m. & 8 p.m. today, and running through March 3. Chris Bennion Photo


Chuck Jones Centennial Celebration @ The Cinefamily (Mid-City West)
The beloved animation legend is honored with a weekend of events at the Cinefamily. Today is Chuck Amuck! featuring 35mm prints of his greatest Looney Tunes shorts starring Bugs Bunny, Daffy Duck and Elmer Fudd, a panel discussion led by historian Jerry Beck and distinguished animators and a rare showing os his 1973 TV special A Cricket in Times Square. Sunday is a screening of Jones' collaboration with children's author Norton Juster, the 1970 adaptation of The Phantom Tollbooth.


The Harlem Globetrotters @ Staples Center (Downtown)
I vividly recall going to see the Globetrotters when I was a child and being totally in awe over their high-flying antics and ball-spinning maneuvers. Their games are exciting as ever, especially since they have female players in the lineup now too. This is the place to take your kids, nephews and nieces for a lifelong lasting memory.


Pete Wentz @ Barnes & Noble (The Grove)
As Fall Out Boy fans anxiously await the group's first album in five years, Save Rock and Roll (coming on April 16), their anticipation can be satiated by reading a new novel the band's founder/bassist. Wentz celebrates the Feb. 19 release of Gray, which details the dark side of rock 'n' roll, with a discussion and signing.

Andros Georgiou @ Book Soup (West Hollywood)
Georgiou and his second cousin Georgios Kyriacos Panayiotou (aka George Michael) were inseparable for most of their lives, but the singer's arrest in 1998 created a rift in their relationship. Georgiou seeks to make amends with his beloved cousin with a truthful telling of his life alongside the music star in ROCK: The Luckiest Man in Pop. He discusses and signs the biography that was released last November at Book Soup.

In the Valley Below @ The Echo (Echo Park)
I'm completely on board with In the Valley Below's dreamy mix of male and female vocals from Echo Park's Jeffrey Jacob and Angela Gail. Whether they're making you dance to "Peaches" or cry to "Take Me Back," the pair's melodic duets won't fail to strike a chord in your soul.

Posted by Jigsaw Magazine at 10:09 AM