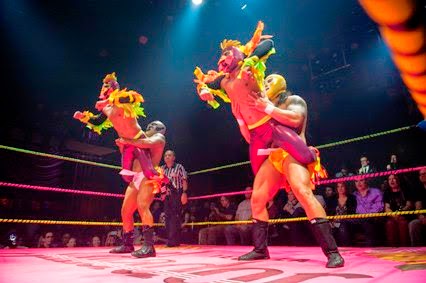 
Cinco de Mayan Spectacular @ The Mayan (Downtown)
What could say 'let's celebrate Mexican heritage and pride' more than the high-octane lucha libre wrestling, burlesque striptease routines and hilarious comedic commentary of Lucha VaVoom? While they put on shows for various other holidays throughout the year, their Cinco de Mayo spectaculars are probably the most popular. If you're a regular, then you most likely already have your ticket for Thursday or tonight's show in hand. But if you have never experienced the outrageous sexo y violencia at one of their events, you better hop to it because it will undoubtedly sell out. Also Friday.


In Theaters This Week
Andrew Garfield and Emma Stone are so adorable, I could watch them act together in anything, add Jamie Foxx, Paul Giamatti and Felicity Jones into the mix for The Amazing Spider-Man 2, and we've got ourselves a winner; Elizabeth Banks plays a reporter who is stranded in downtown L.A. without a phone, car, ID or money and only has eight hours to get to an important job interview in Walk of Shame. Also in theaters: Belle; Friended to Death; Ida


Philip Glass @ Royce Hall (Westwood)
If you've never heard of Philip Glass, I'm not sure I want you reading Jigsaw anymore. Just kidding, well, kind of. He is one of the most influential composers in the world today, and his scores for the Qatsi film trilogy are epic. He has also scored films like Kundun, The Truman Show and The Hours, written operas, symphonies and sonatas, and has collaborated with artists that range from David Byrne and Allen Ginsberg to Aphex Twin and Leonard Cohen. See Glass perform in his interpretation of La Belle et la Bête tonight, with the Philip Glass Ensemble Saturday or with Maki Namekawa and Sally Whitewell on Sunday. It's for your own good.


California Bookstore Day @ Various bookshops (Citywide)
Independent bookstores are taking part in this party throughout the state with 13 exclusive books and art pieces being offered in addition to their regular inventory. Think Record Store Day, but for book lovers. Some of the special items are a limited bound copy of Neil Gaiman's The Sleeper and the Spindle, a signed Hugo lithograph and a cool punk rock writers journal from artist Wendy MacNaughton. Local purveyors taking part include Skylight Books in Los Feliz, Small World Books in Venice and Book Soup in West Hollywood.


Kentucky Derby Day @ Santa Anita Park (Arcadia)
I've always wanted to go to the Kentucky Derby to wear and admire the crazy awesome hats that ladies put on their heads for the event. One or five Mint Juleps in those fancy silver cups sound so good right now, too. Although we are thousands of miles away from Churchill Downs, Angelenos can still take part in some derby fun at our local track in Arcadia. There will be live bluegrass music, a hat contest (YAY), food trucks, a craft beer garden and plenty of competitive races to wager on.

Kings vs. Ducks @ Honda Center (Anaheim)
It's a SoCal battle to advance to the Conference Finals in this year's Stanley Cup Playoffs, but aaahhh, who do I root for, my childhood hometown Ducks or my current hometown Kings? Anaheim finished the regular season at the top of the west, just one point behind Boston, while Los Angeles became only the fourth team in NHL history to win a series after losing their first three games when they overcame San Jose on Wednesday. For my own sanity, I think I'm going to stay neutral on this one and just be happy for whichever team goes on to face Chicago or Minnesota. 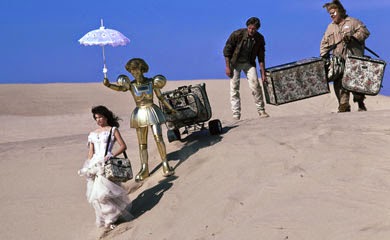 
Spaceballs @ Egyptian Theatre (Hollywood)
If you got my little May the Fourth joke above, then a) we should be friends and b) you are probably already planning some kind of Star Wars-related activity for today. If you love the George Lucas movies and can't wait to see what J.J. Abrams does with the franchise, then you will love this Mel Brooks satire starring Bill Pullman, Rick Moranis, John Candy and Daphne Zuniga as much as I do. Even if you have seen Spaceballs 20-plus times, lines like "We were told to comb the desert so we're combing it" and "May the schwartz be with you!" never get old.


Cinco de Mayo Festival @ Olvera Street (Downtown)
The three-day festival begins on Saturday, but today is the official holiday that celebrates Mexico's 1862 victory over French forces near the city of Puebla. From 10 a.m. to 10 p.m., there is plenty of popular and traditional music, dancing and food to be experienced. Grab a strawberry-filled churro, take in some mariachi music and party it up.


Manhunter @ Egyptian Theatre (Hollywood)
I am such a scaredy cat when it comes to horror and suspense, but even I am intrigued by Thomas Harris' most famous character, Hannibal Lecter. In addition to the novels featuring the serial killer, I love The Silence of the Lambs and Hannibal films. Maynard Keenan, frontman of Puscifer and Tool, is also a fan of the character, as evidenced by his selection of Manhunter in the Modern School of Film's Film: Masters series, which screens works handpicked by renown cultural figures like Keenan. The 1986 film from Michael Mann was based on Harris' first novel to feature Lecter, Red Dragon, and stars William Peterson and Brian Cox. Keenan will be on hand after the screening for a discussion about the film moderated by Robert Milazzo.


Frances Cone @ Hotel Café (Hollywood)
The Brooklyn-based trio of Christina Cone, Jeff Malinowski and Andrew Doherty just met within the past year, but as heard on their self-titled EP that released last week, they clearly belong together. With catchy choruses and beautiful harmonies, songs like "Better Man" and "June" will grab your ear and heart. This is the perfect show to get you through your mid-week slump.

Posted by Jigsaw Magazine at 10:50 AM