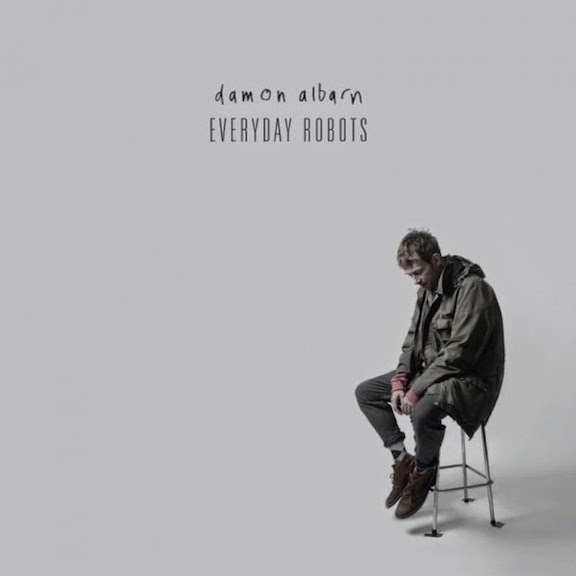 Damon Albarn – Everyday Robots (Warner Bros.)
Damon Albarn sure knows how to craft a catchy song, yet the British singer-songwriter, multi-instrumentalist and record producer's name might not be that familiar to you. His work at the helm of Gorillaz and Blur has made him a critical and commercial success, and with today's release of his first solo album, people will begin to associate his name with the brilliant compositions and the voice they will undoubtedly recognize. On Everyday Robots, which he co-produced with XL's Richard Russell, Albarn is more introspective and reflective on his personal life and history than he has ever been and seamlessly blends electronic beats with soulful vocals. Everyone will still find bits to relate to among the 12 tracks. You will find yourself clapping along with Albarn's collaboration with Brian Eno, "Heavy Seas of Love," smiling to "Mr Tembo" (a song about a little elephant he encountered in Tanzania) and shedding some tears during "You & Me."

The Goastt – Midnight Sun (Chimera)
Sean Lennon and Charlotte Kemp Muhl first unveiled songs from the Ghost of a Saber Tooth Tiger in 2010. SInce then, the New York modern psych-rockers have toured with the likes of the Flaming Lips and Tame Impala and release a new album today. Midnight Sun takes their compelling, postmodern-psychedelic sound further on lush tracks like "Animals," "Don't Look Back Orpheus" and "Moth to a Flame." Catch them perform as a five-piece band at the El Rey on May 17.

Rodrigo y Gabriela – 9 Dead Alive (ATO)
I can't remember the exact date when I first heard the Mexican duo, but I do remember instantly falling in love with the fiery energy of their fast, rhythmic acoustic guitars. It's been five years since Rodrigo Sanchez and Gabriela Quintero released new, original material, and 9 Dead Alive is a return to their roots, with stripped-down and minimalistic pieces that showcase their incredible skills. Just one listen to songs like "The Soundmaker," "Torito" or "Somnium," and I am instantly reminded of why I first became so enamored with them. See them set the Orpheum stage on fire a week from today (May 6) or at the Palladium May 7. Strange Talk – Cast Away (Wind-Up)
Sometimes you just need to dance, and this debut album from the Aussie foursome is an ideal soundtrack to any party, be it a one-person bedroom dance session or at a crowded club. The 12 tracks received four out of five stars from Rolling Stone Australia, calling them "equal parts Cut Copy and Daft Punk with pinches of Eighties pop," and from the opening bars of its title track, Cast Away will have you moving. You'll also want to give "Young Hearts," "Climbing Walls" and "Morning Sun" a spin or two or three. Their May 14 show at the Echo is sold out, but you can also catch them performing at Bardot on May 12.

Posted by Jigsaw Magazine at 9:37 AM