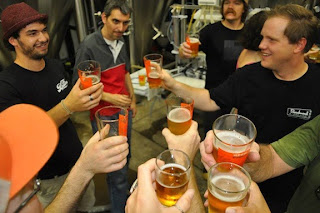 
Los Angeles Beer Week @ Various locations (citywide)
Happening through Sept. 29, it's actually a bit longer than a week, but I don't think anyone will complain. There are so many events going on, beer lovers in every neighborhood have something to look forward to – from Stone's Kick-Off Celebration at Verdugo Bar tonight and Oinktoberfiesta at Oinkster Saturday to an opening gala at Union Station on Sunday with tastings from all your favorite breweries such as Allagash and Anchor, as well as locals like Angel City, Eagle Rock and the Bruery, and a Musical Beer Crawl in Echo Park on Tuesday evening.


Gunnar Hansen @ Book Soup (West Hollywood)
The actor who played Leatherface in the original The Texas Chain Saw Massacre is also an acclaimed poet and author. He celebrates next week's release of his new tell-all, Chain Saw Confidential: How We Made the World's Most Notorious Horror Movie, that goes behind the scenes and offers insights into the film. He'll also be signing the book at the Aero tomorrow evening before a screening of the 1974 movie.


Tommy Santee Klaws @ Harvard & Stone (Hollywood)
If you have yet to see the amazing group of musicians perform, you shouldn't miss this show because intimate venues like Harvard & Stone are the ideal settings to see Tommy Santee Klaws really shine. From guitar, violin and upright bass to mandolin, contrabassoon, xylophone and other toys, there isn't an instrument that you won't see on stage with this talented octet, anchored by Tommy's powerful and emotionally gripping vocals. A great time, guaranteed.


In Theaters This Week
Couldn't believe my eyes when I glimpsed Sawyer from "Lost" (Josh Holloway) and "Drake & Josh"'s Josh Peck in a commercial for Battle of the Year, a dance movie that also stars Chris Brown. I support anything that celebrates dance, but… yikes; On the other hand, Prisoners – with Hugh Jackman, Viola Davis, Terrence Howard and Maria Bello as parents of missing girls (and Jake Gyllenhaal as the detective searching for them) – looks awesome; Comedy-drama Enough Said stars Julia Louis-Dreyfus, James Gandolfini, Catherine Keener and Toni Collette; Ron Howard directs Chris Hemsworth and Daniel Brühl as rival Formula 1 race car drivers in Rush; Mark Ruffalo, Gwyneth Paltrow, Tim Robbins and Alecia "P!nk" Moore in Thanks for Sharing. Also in theaters: After Tiller; Blue Caprice; C.O.G.; Generation Iron; Haute Cuisine; IP Man: The Final Fight; Jewtopia; Mademoiselle C; Money for Nothing: Inside the Federal Reserve; Mother of George; My Lucky Star; The Short Game; A Single Shot; The Wizard of Oz: An IMAX 3D Experience


Free Dominguez @ The Mint (West Los Angeles)
The captivating Kidneythieves frontwoman celebrates the release of her new solo album, Volcano + the Sea. Dominguez's soaring vocals set to pulsating basslines and searing guitars make this the show of the week. Also on the bill are Paz Lenchantin, Sierra Swan and Echocell, and none of them should be missed, either.


Mid-Autumn Moon Festival @ Central & West Plaza & Bamboo Lane (Chinatown)
There's more than just a stack of mooncakes to be be excited for at the 75th annual festival. In addition to exhibits from artisan calligraphers, sculptors, storytellers and magicians, Eddie Lin hosts a culinary stage with cooking demos and a dessert eating challenge. There are performances from dance, acrobatic and martial arts troupes, as well as music from the likes of Victory, Avid Dancer and the Little Ones. Plus, Griffith Observatory is providing telescopes to view the full moon.

Tarfest @ La Brea Tar Pits (Mid-City West)
The 11th annual festival packs so much art, music and culture into six hours, it's incredible. Aside from the live art by Greg "Craola" Simkins, AXIS, William Wray and David O. Johnson and performances from local bands Saint Motel, Nightmare Air, Echosmith, Tapioca and the Flea and Irontom, gourmet food trucks are going to be on hand, Lagunitas hosts a biergarten, there's a poem store and plenty of other activities to keep you busy well after sunset.


Flashdance @ The Aero (Santa Monica)
Can't believe it's the 30th anniversary of the dance movie that was everything to me when I was in grade school. I still love it; whenever it happens to be on TV I can't help but watch, sing-along to and dance to it. American Cinematheque commemorates its anniversary with a special screening and a discussion to follow with director Adrian Lyne and actors Jennifer Beals and Michael Nouri. Now, I'm going to have "What a Feeling" in my head all day.

The Beach Ball Festival @ Santa Monica Pier (Santa Monica)
KCRW presents the first-ever Soul Revue and Reggae Fest, a beachside dance party taking over the pier for two days. Saturday's lineup brings the soul of the weekend with Aloe Blacc (who doesn't love his "Wake Me Up!" collaboration with Avicii and Mike Einziger?), Allen Stone, Maceo Parker, Lee Fields & the Expressions, Myron & E and the Funky Sole DJs. The Reggae festivities on Sunday include Michael Rose of Black Uhuru, Sly and Robbie, the Skatalites, U Roy, Soul Syndicate and the Dub Club Soundsystem.


Radar L.A. @ Various locations (citywide)
This year's festival of contemporary international theater features some incredible productions during its week-long schedule. There's the premiere of David Roussève's "Stardust," a piece that combines dance, music and video; Basil Twist's puppeteering set to music by Yumiko Tanaka in "Dogugaeshi"; and an emotional and thrilling staging of Dennis Cooper's Jerk from director Gisèle Vienne and performer Johnathan Capdevielle  – and those are just three of the 18 productions.

Posted by Jigsaw Magazine at 10:40 AM