"Like my father and his father before him, I'm a carbon copy wrecking ball." —Charlie Greene, "Everything Gets Me Down"

As the son of a touring singer-songwriter and recording artist, grandson of a 1940s-'50s big band leader and great-grandson of a front-porch banjo player, becoming a musician was always in the cards for Charlie Greene. While his mother's family in South Carolina was made up of contractors and builders ("People with practical jobs."), his father's Northern Georgia roots were firmly planted in music.

When Charlie's family relocated to Los Angeles right before he started high school, he began to cultivate a strong love for all types of music, as evidenced on his new self-titled album that released last week. Songs like "Man on Fire," "Lost & Found" and "Two Sides" reflect influences that range from rock to country and jazz, while lyrics peppered with references to the beach, desert, mountains and "the city of dreams" demonstrate a love for his adopted hometown.

"I was lucky that my dad was in the business because I got tons of free music and discovered a lot of stuff from siphoning off whatever was sent to him," Charlie confesses. "He played with Frank Zappa a lot; he is on Weasels Ripped My Flesh and a couple of those records. Zappa actually brought him out to L.A. for the first time when he was 20 or 21, but he also had a band, the Mike Greene Band, who were on Mercury, put out a few albums and toured all over. You can find them online. It's pretty groovy  stuff: a lot of songs with no vocals and multiple flutes, '70s jazz rock." 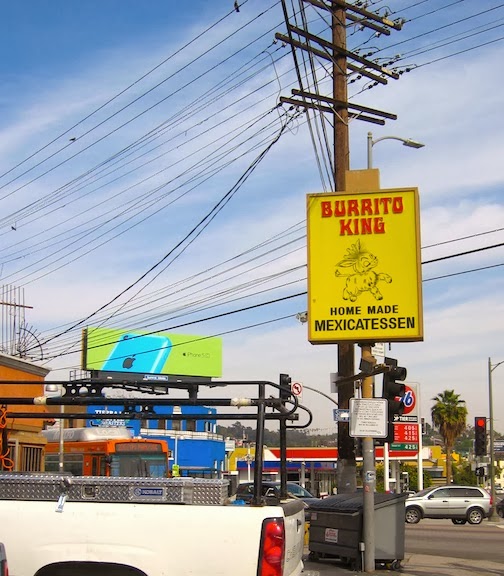 A spot associated with a couple of other legendary L.A. artists serves as the location that Charlie has chosen for our interview. There's a black-and-white photo from 1971 of Gram Parsons sitting atop the hood of a Cadillac parked on Sunset Boulevard in front of the Burrito King at the corner of Alvarado Street. It was the first (and now the last) of the 20 taco stands that Julian E. Montoya opened in the 1960s throughout Southern California, Texas and his native Colombia.

"There's a great video from the late 1970s of Warren Zevon being interviewed by a Dutch film crew who are doing a documentary [Wonderland, about the L.A. music scene]. He comes here, and the place looks exactly the same. This street corner has hardly changed in the last 40 years," Charlie offers. "He talks to people about the neighborhood and about writing the song 'Carmelita,' which is set Echo Park."

You can see Angelenos huddled around Burrito King's counters with an overflowing carnitas torta or plate of crispy tacos in hand at all hours of the day and night. It's a popular late-night stop, especially for the huge California Burrito with carne asada, cheese, sour cream and French fries. Charlie's favorite menu items are the Chorizo Breakfast Burrito and the Machaca (stewed meat with refried beans, green peppers and onions) Burrito.

"I do love spicy food, and the machaca and chorizo here are super spicy. I think I've got a gut of steel," Charlie chuckles.

Today he orders some fish tacos, and then we both sip on cups of horchata as we take a stroll next door to Brazil Tobacco to look at all the hookahs, pipes and bongs until his food is ready. After getting his plate of tacos, we sit down on some stools and talk about the first show he went to in Los Angeles.

"I remember being 11 or 12 and going to Oingo Boingo's Halloween concert at Universal Amphitheater in the mid-'90s. That was a big first for me, then I was really into jazz all through high school. John Coltrane and Ornette Coleman were big influences on me, and I ended up studying tenor saxophone at Berklee College of Music for a year," he says. "As far as singer-songwriter stuff, I've been really into Harry Nilsson, early Beck and tons of different kinds of music like Black Sabbath. There's an ad for Blonde Redhead behind you, and I've been to 20 Blonde Redhead shows over the years. I lived up in Olympia, Wash., and I used to see them up there. I used to go to a lot of Unwound shows, too."

After starting classes at Berklee, Charlie quickly realized that he didn't want to be a jazz saxophonist and actually stopped playing music altogether for about five years. 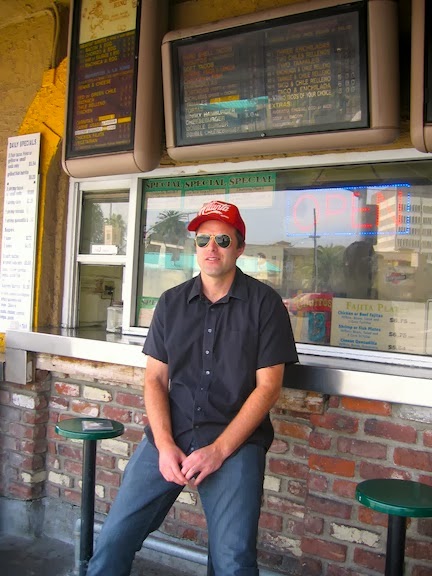 "But then I started driving myself crazy once I got to about 24 or 25 and decided that I had to do it. I would have days where I couldn't get out of bed, and I would be hearing music in my head. I was in a weird relationship, had a little breakdown and decided that music is what I needed to do," he remembers. "I feel like I was bottlenecked for five years; all this stuff I needed to do was stuck at the neck of this bottle."

Charlie began to write songs and eventually released his 2012 debut album, Wildfire Music. Fire is an element that is crucial to another passion that he shares with his father, ceramics. Charlie creates beautiful tile art and jewelry pieces that feature images of the body, skulls in particular.

"I had a book that showed different animals and their skeletons. Giraffe skulls are really bizarre looking, a bit demonic, so I started tracing those, and that turned into skulls. I began working with clay, thinking about its similarity to bone, and doing a lot of skeleton tiles," he recalls. "I had two straight winters where I broke my right heel and then my left ankle, so I was laid up for a month or two each time and set up an assembly line for making skulls. I've got a ton of them that I'm using to work with a jewelry maker from New York."

Across the street from Burrito King is one of Charlie's other frequent haunts, a building that houses Wells Tile & Antiques and Eric's Architectural Salvage, who pull antique furniture and fixtures from homes and businesses.

"I go over there once a month. Doing tile work, it's nice to have a place to go for inspiration for different ways to think of it. I sometimes feel like this with music, that I'm constricted thinking about what is possible, but working with clay you can do anything because it's three dimensional, you can go in any direction," he admits. "That places is great, though. My little brother bought me a little metal doorstop in the shape of a poodle from there as a penance for allowing him to be the best man at our middle brother's wedding last year. They've got these wooden pillars painted in primary colors – these huge wooden things that could hold up the middle of your house – that they pulled out of an old Mexican restaurant, and I've been thinking about buying those."

After Charlie finishes his tacos, we start heading west on Sunset Boulevard towards his favorite barbershop, the New California Barbershop, so he can get a haircut. While we're walking, we bemoan the lack of quality southern food in Los Angeles, and I ask him to name some other places he likes to eat. He lists Lares, El Compadre and Mohawk Bend. When people come to visit, he usually orders a deep-dish pizza from Masa just to show them how thick it is.

As far as places to go for musical and lyrical inspiration, Charlie mentions that ideas can strike him anywhere.

"Inspiration comes from everywhere, I just need to be in the mindset of it being all I'm thinking about continually, seeing if anything that happens is something that I can use in a song or in a piece of art. I've been carrying around these little notebooks for years," he says and pulls out a small spiral notepad. "I've got 40 of these, filled up with random ideas. When I get to the point of finishing songs with lyrics, I pull out the notebooks and try to get inspired by a word or phrase. It's like a fragmented journal. I'll look and there will be a girl's name and phone number that she wrote when I was in a bar in Barcelona from 10 years ago. I can tell what I was thinking by looking at the phrases on either page before or after. Being able to trace where a song lyric came from is cool."

Aside from music and art, Charlie is also an avid reader. Lately he's read a lot of W. G. Sebald, Nick Tosches' Me and the Devil and short stories by Breece D'J Pancake. There is one writer, however, who has made the biggest impact on him.

"Reading Charles Bukowski for the first time when I was 14 was a big deal. I read everything by him that I could get my hands on within a school year. I think that happens to a lot of kids, where they think, 'oh man, I want to be a cigarette-smoking alcoholic who chases girls,'" he smiles. "I still read a lot of his poems, and I think about him every time I drive past De Longpre Avenue in Hollywood. It's pretty interesting, imagining him during all those years before anyone knew who he was, working, drinking and struggling."

Although he grew up in Atlanta, lived in places like Boston and Washington, and recorded his latest album in Nashville, Charlie has fallen in love with Los Angeles and doesn't think he would want to live anywhere else. 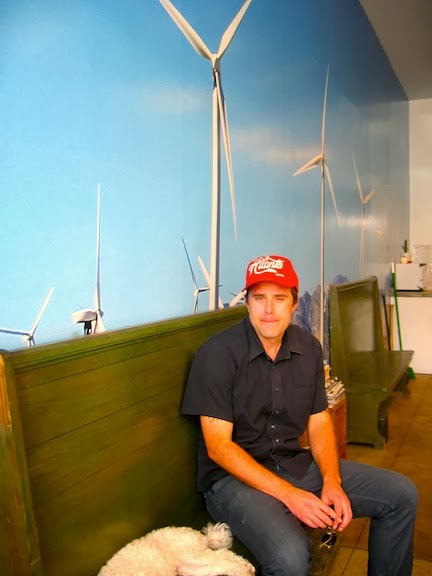 "I like the familiarity I have with Los Angeles. I feel like I have connection with it in a solitary way. I've spent a lot of time walking around the city by myself, driving around the city by myself. Whenever I'm on an airplane coming back to Los Angeles, just seeing the sprawl it relaxes me, the idea of being lost down in there and not running into people I know everywhere," he confesses. "I like the car culture, the point-to-point culture, how much takes place in people's houses here. There's also a mystery to lots of parts of Los Angeles."

We come to a stop at musician-turned-barber Brian Girgus' year-old the New California Barbershop, and being a frequent customer, Charlie is greeted with familiar smiles as soon as we walk through the door. He brings my attention to a massive wall mural of white wind turbines set against the mountains and clear blue sky of Girgus' native Coachella Valley. I notice several potted cacti sitting in the front window, Jimi Hendrix on the speakers and an area set up as a general store with beauty products and vintage clothing and housewares for sale in the back of the shop.

New California offers hair cuts for men, women and children or a hot towel and straight razor shave for $35, as well as beard trims for just $10. Since Girgus is finishing up with a client, Charlie sits on a bench to wait and visits with the shop's mascot, a miniature poodle named Shelley Long. He tells me that he's enjoyed playing a three-week, Tuesday residency (with March 11 being the final evening) at Hollywood's Piano Bar in support of his new album's release, and his excitement and hope for the future is palpable when he informs me that more L.A. shows are in the works for May.

"All the insecurity, confusion and bullshit around the music industry and trying to be a musician – it's worth it because I love music, and I know it's what I'm supposed to be doing," he says. "I'm not really sure what the second choice would be at this point."

Like I said before, music has always been in the cards for Charlie Greene.

Posted by Jigsaw Magazine at 1:09 PM