Derek Cianfrance @ Aero Theatre (Santa Monica)
The director/screenwriter discusses his films in between an American Cinematheque double feature of his last two works, The Place Beyond the Pines and Blue Valentine. First up is The Place Beyond the Pines, a crime drama centered around carnival motorcycle stuntman Luke Glanton (Ryan Gosling) who turns to bank robbery as a way to provide for his son. Bradley Cooper and Eva Mendes also star. 2010's Blue Valentine was Cianfrance's first time working with Gosling, who, along with Michelle Williams, is part of a married couple whose relationship is documented over the course of several years. Both films are fantastic character studies that explore familial relationships in powerful ways.


Thai and Korean Street Market Festival @ Heirloom LA (Eagle Rock)
Heirloom LA and Poketo are throwing an event to celebrate Korean and Thai street food and drink from 6 p.m. to 10 p.m in Heirloom LA's salon garden. Aside from the delicious Kyochon-style chicken wings, grilled Kalbi Beef and Bulgogi Pork, there are Boat Noodle Soup, meatballs, a lettuce wrap station (with Larb, crispy pork and spicy eggplant options) and sweet treats to round out the menu. The evening promises music, movies and a photo booth, too. 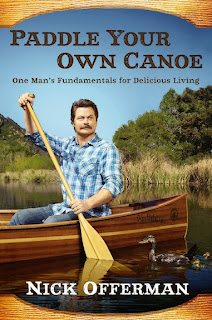 
Nick Offerman @ New Beverly Cinema (Mid-City West)
The "Parks and Recreation" funnyman made his literary debut with Paddle Your Own Canoe: One Man's Fundamentals for Delicious Living this week and celebrates the release with an event where he presents and signs copies of the book. The $31.95 admission fee includes a copy of the book, which offers tales from his childhood, early days in theater and as a carpenter, as well as his courting of wife Megan Mullally. Expect hilarious anecdotes and life lessons concerning "manliness, love, style, religion, woodworking and outdoor recreation."


Our Vinyl Weighs a Ton: This Is Stones Throw Records @ Exposition Park (South Los Angeles)
If you're a music lover living in Los Angeles, then you know of Stones Throw and its stable of artists that includes Mayer Hawthorne, Aloe Blacc, Dam-Funk and Madlib among many others. Founded by DJ Peanut Butter Wolf in 1996, the story of the label is being told to the world in a new feature-length documentary from director Jeff Broadway with plenty of concert footage, home video and interviews with the likes of Common, Mike D, Kanye West, Talib Kewli and Flying Lotus. Street Food Cinema screens the film at 7:30 p.m., but come early for DJ sets from PBW and KCRW's Garth Trinidad and food from food trucks that include Hungry Nomad, Romolo's and Bollywood Bites.


Sallie Ford & The Sound Outside @ The Satellite  (Silver Lake)
Listening to songs like "Party Kids" and "They Told Me" from the Portland, Ore. quartet's latest album, Untamed Beast, that released earlier this year, it's hard to concentrate on anything other than having fun. It's a good thing they're swinging through Los Angeles again, because I'm in need of a good party with their soulful and gritty brand of rock that's anchored by the witty lyrics and powerful vocals of Sallie Ford.


"Wait Until Dark" @ Geffen Playhouse (Westwood)
The world premiere of this new adaptation of Frederick Knott's 1966 play and 1967 film (starring Audrey Hepburn) of the same name puts a twist on the classic placing the story in a different time and setting. The production is just as full of chills and thrills, though. Alison Pill, from HBO's "The Newsroom," stars as Susan, alongside a cast that also includes Adam Stein, Mather Zickel, Rod McLachlan, Matt McTighe and Brighid Fleming. Running through Nov. 17.


Dan Croll @ Troubadour (West Hollywood)
The Liverpool singer-songwriter made his US debut with the From Nowhere EP earlier this year, and with tracks like his latest single, "In/Out," Croll continues to capture acclaim across the country. As we await his first full-length release, he's touring the states with a stop at the Troubadour this evening. It's impossible not to smile while dancing to his fun songs that run the gamut genre-wise. I can't think of a better way to get through the mid-week slump than this show.

Posted by Jigsaw Magazine at 11:10 AM