Most people would probably love to be their own boss, but few people actually have the work ethic and passion to make that dream a reality. However, Jennifer Farmer-Knowles, the owner and founder of antique furniture refurbishing boutique Mi Vida Vintage, has the necessary entrepreneurial spirit and determination in spades. In fact, it's something that is ingrained in her DNA.

"I've always liked decorating, but it was never anything I thought I would do for a living. The only thing that I ever wanted was to have my own business. My parents are both entrepreneurs, and from a young age, I wanted to work for myself. It didn't really matter what it was. I just never wanted to be in a stuffy, corporate environment," she says.

The space Farmer-Knowles has created is anything but stuffy. As soon as you walk into Mi Vida Vintage, located in an old brick building across from MacArthur Park in Westlake, you're surrounded by beautifully refurbished antique dressers, nightstands, tables and credenzas painted in a array of bright colors. Her assistant, Laureen Carter, is busily covering a piece with a paint gun in one room, while Farmer-Knowles leads me to a couch in her office area where we sit and talk about her company and life in Los Angeles.

An intense drive is something that she has always had, even at the age of 18 when she first made the leap to Los Angeles from Texas.

"About 10 years ago, I moved out here for acting school, and it made me never want to act again," she laughs. "I discovered the Kibitz Room, went to shows and hung out with music people. Something clicked that I should do music instead of acting because I was in that world. My boyfriend at the time was in a band up in San Francisco, and when I went up to visit for the summer, I helped his manager (who also managed bands like the Killers) do press kits and mailings. I eventually enrolled in the Music Business Program at MI [Musicians Institute]."

Farmer-Knowles then took on several jobs in the music industry – an internship at Interscope, doing radio promotions ("That was terrible. I made like $7 an hour minimum wage and had to drive out to Van Nuys by 7:30 a.m. to start calling radio stations on the East Coast. I hated it!"), as a personal assistant to Japanese musician Yoshiki, doing booking and promotions for Safari Sam's, at a music start-up technology company and finally in artist relations for Daisy Rock Guitars. After parting ways with Daisy Rock and getting married, the idea for Mi Vida Vintage was born.

"When my husband and I got married we find our own place and had our money from the wedding to use to furnish it. I wanted to refurbish stuff because I would see people posting about it online, so I went on Craigslist and found a purple dresser from this girl. I went to her house and saw that she had other pieces in her garage that I had seen on Craigslist too. When she said that this is what she did for a living and that it was going well, I thought, 'I could do this,'" Farmer-Knowles remembers. "I had a friend who was also unemployed, and I told her, 'I have a garage, let's do this!' We started buying vintage pieces and began to figure out how to do it. We had no idea what we were doing, buying the paint and supplies. The first piece we did was we stained a table and then a purple piece almost the same as what I had originally bought. We started listing them on Craigslist and getting inquiries. Stuff started selling slowly but surely. My friend ended up leaving because it wasn't moving as fast as she wanted it to, but I wanted to keep doing it. I just kept doing it out of my one-car garage, found a painter to help me and it just went from there."

Since then, Farmer-Knowles created a website, as well as Etsy and Craigstlist pages, for customers to place custom orders and peruse any special pieces that are already finished. Most of Mi Vida Vintage's work is from custom orders, where customers select an unfinished piece from a gallery of photos and indicate what color paint and type of hardware they want.

"Sometimes if custom stuff is slow then I make stuff to sell, but this entire year so far, we haven't had to do a piece to sell," Farmer-Knowles says.

When she does have time to do some finished pieces, she sets up a booth at the Rose Bowl Flea Market to sell the pieces.

"I did the Rose Bowl in December and January. We just don't have time to make the pieces because we have so many custom orders now, and it's very expensive. With custom orders I get paid, but with stuff I'm making I have to put forth all the money for the materials, to rent the space and a truck to transport," she says. "I would like to do it again, especially since we just made the switch from paint to lacquer, which is a lot more durable. When we were transporting stuff back and forth from the Rose Bowl, no major damage would happen, but there were little things just from moving everything around. Now that we have more durable pieces I would like to do it again, but I would need to block out a month and delay custom orders. It's fun, but people go there looking for deals and I already set prices at the cheapest price point that I can still make money from."

"There's so much involved that people don't even realize. A gallon of lacquer can range from $50 to $100. There's not a furniture fairy who drops off the pieces to me," she laughs. "I spend a lot of time looking and picking out pieces I think people will buy. I take my old '90s van with horrible gas mileage to go pick the pieces up, so even just picking them up adds like $20 to $30 in gas on top of what I paid for it, which could be anywhere from $50 to $100 each, plus I have people working for me that I have to pay and rent."

Mi Vida Vintage is doing really well, though, as one can tell from the amount of custom pieces that fill their showroom. When I ask Farmer-Knowles about the favorite pieces she's refurbished so far, it's hard for her to pick just one.

"I really like everything that we do," she admits. "There's been some stuff where I had no idea what the finished product would look like because of customers' color choices, but when we actually did them, they looked awesome."

Farmer-Knowles asks Carter for her opinion, and she answers, "My favorite is the first one that I ever helped with, the one with black-and-white stripes in it." 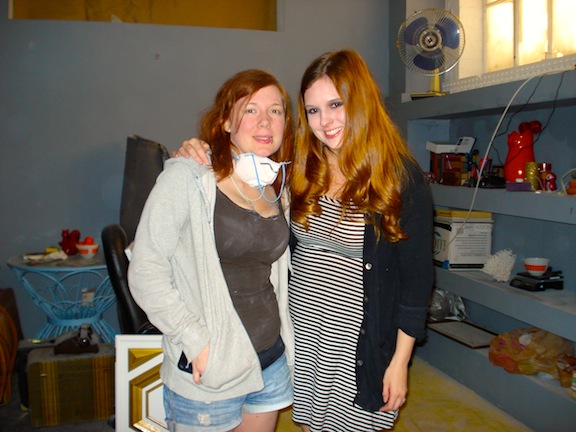 "It was a really ornate one: white, with gold handles and black-and-white stripes on the inner drawers," agrees Farmer-Knowles. "I felt like that one got us a lot of work. Everyone wants white and gold now. We also did this mint green one for a nursery that was really cute. We did one that looked like a giant Tiffany's box, which was cool. I painted one piece, a small nightstand, as a Union Jack by hand, that was very tedious."

Hard work is something that she doesn't shy away from. Farmer-Knowles lives in the heart of Hollywood, but rarely has the chance to go out anymore. Her husband does sound at Bootleg Theater, so if she does make it out to a show, she usually goes there.

"I don't really have a life anymore. Laureen and I are here 10 to 12 hours a day. She's my right-hand person. While she does the painting, I'm finding pieces, dealing with clients, running around buying paint and dealing with the money," she tells. "The work never stops, but that's not a bad thing. I don't dread coming here. The only thing I dread is people not liking their pieces. I'm a perfectionist, I inspect every detail. I try to make everything something that I would put in my own house. I think that's what's going to make us better than everyone else: paying attention to details and making things as good as we can get them for being vintage.

Getting into the furniture/home decor business was never Farmer-Knowles' expected path she would follow in life.

"It wasn't something where I said, 'I want to paint furniture when I grow up.' The opportunity presented itself, and I took it because I've always wanted to work for myself," she says. "This was something that I saw that I could make immediate money from, that has potential to be even bigger than it is now."

Farmer-Knowles intends to do everything she can to ensure Mi Vida Vintage reaches that potential, including plans to expand into home decor accessories and eventually fabricating their own stock pieces for customization.

"I'm working on a pillow line with my friend Kate. Vintage inspired pillows, in five different sets, each from a different era – the 1950s, '60s, '70s, '80s and '90s. Each era will have three different pillows. Then, we'll do another line with musical eras. She's an artist, so she's doing all of the images and graphics by hand," she explains. "I've also been talking to someone about making my own pieces, but that will be down the road. Eventually it would a lot better for me to have stock pieces that people could customize, and then what we're doing now would be the higher-end orders. My plans are to make this big."

Posted by Jigsaw Magazine at 11:32 AM