Poise is the perfect word to describe Valarie Pettiford. The Tony-nominated actor/singer/dancer effortlessly exudes elegance. One would immediately attribute her graceful bearing to her years of dance training, but after speaking with her for a few moments, I realize that she is an inherently charming and talented individual.

"My mom and dad said that I came out dancing. By the time I was 2, I was doing a mean twist," she laughs. "I knew at 3 years old what I wanted to do: dance. From that, it evolved into acting and singing."

We sit down for a conversation at Valarie's favorite place to spend time in Los Angeles, a clothing boutique called Indexx, and her natural effervescence bubbles to the surface when she introduces me to the shop's owner, Joy Yassan, and recounts how they became friends.

"I'm a shopaholic. When I first moved to Los Angeles in 1996, Joy had one of her original stores across the street. I am a native New Yorker, so I was checking out my new neighborhood, trying to find my watering holes, my Starbucks, where I could go to the cleaners and to shop. She was one of the first shops I went into, and I've been going there ever since," she says. "At least 85-90 percent of the stuff that I own is from her shop. She makes jewelry, T-shirts – she's just amazing. As her customer and friend, I have some of her original artwork. She does oils and watercolors, and I have three of her paintings in my home."

It's true that Joy has a keen eye and impeccable taste. Indexx is a gorgeous boutique, and many of the pieces displayed are of Joy's own design. Watching the two chums laugh and interact, their genuine fondness for one another is apparent. Valarie has not only grown to love her friends in Los Angeles, but also the city itself.

"I [first] moved to Beachwood Canyon, right under the Hollywood Sign. It was beautiful. I was there for about a year, and then I got the Broadway show 'Fosse.' I went out of town for a year-and-a-half then bought a house in Studio City. I'm a Valley Girl now, and I love it," she confesses. "I love the Mexican restaurant Senor Fred because it's fun, and the people are so nice there. Right across the street is Stanley's. They're excellent. I love to go out to restaurants and to hear my friends perform. One place is called Show at Barre, actually they've changed the name to Rockwell: Table & Stage, in Los Feliz. They've expanded, made the stage bigger and the place is more conducive for shows and dinner as opposed to being two separate venues. Another place is Rolling Stone L.A. in Hollywood & Highland. It's amazing, so rock 'n' roll. There's a great stage with great sound, a bar with VIP bottle service, couches and a huge space where you can dance and listen to some incredible music."

Music has always held a special place in Valarie's life, from growing up in Queens, N.Y. to her years in musical theater, her 2004 solo debut album and the Oct. 9 release of a new album of original lullabies, Velvet Sky.

"Music was a huge part of our family upbringing; there was always singing," she remembers. "All types of music (jazz, classical, country, blues, R&B) were playing in our house. It was an amazing time."

Whether it was instilling an appreciation of music or taking her to dance class, Valarie's family has always provided her with a solid support system.

"My dad went out and got pointe shoes before I even took a ballet class. He just knew I loved the ballet," she recalls. "We would watch 'The Nutcracker' on television every year, movie musicals and a lot of ballet concerts on PBS."

Valarie went on to study at some of the most prominent schools in the country.

"I studied at the High School of Performing Arts; you don't get anymore showbiz than that," she laughs. "The dancing school I went to was called Bernice Johnson Theatre of the Performing Arts, and some of the greatest dancers came out of that school or went on to be great choreographers, like Michael Peters who choreographed a lot for Michael Jackson –  'Thriller' and all that. Some of the best choreographers for the concert world, modern dance and the ballet, a lot of them came out of Bernice Johnson."

At age 14 Valarie won her first film role, in the chorus of The Wiz, a musical that holds special significance to her.

"The turning point for me as far as making the transition from concert dancer – from really wanting to go to Alvin Ailey (I was still a ballet major and then changed to modern dance) – was when I saw my first Broadway show, 'The Wiz,' which changed everything," she says.

From there, the dynamic performer began amassing a list of credits that includes "Show Boat," "The Wild Party," "Sophisticated Ladies," "Chicago," "All That Jazz" and a Tony-nominated performance in "Fosse." But there is one role that remains the catalyst for Valarie striving to develop her acting skills and led her to become a real triple-threat.

"I was doing musical theater, but it wasn't until 'West Side Story' gave me chance to play the role of Anita – where I had to sing, dance and act – that there was a turning point in my career, as to being a leading lady on the Broadway stage," she says. "It changed the course for me, in terms of deciding to really sink my teeth into acting lessons and singing lessons because this is what I really want to do: act. I really wanted to study acting and get my singing chops together to be able to do those leading roles that Chita [Rivera], Liza [Minnelli] and all those great people created." 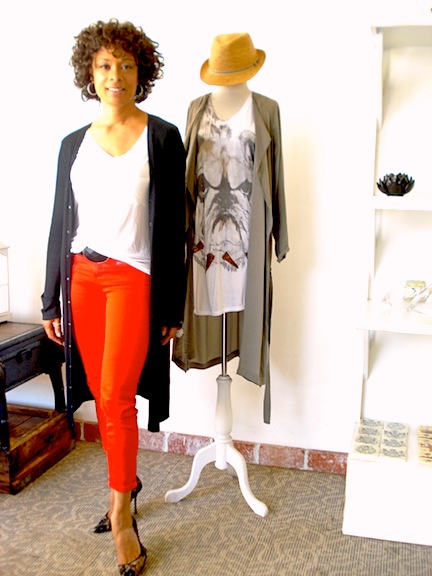 Roles in films like The Cotton Club, Stomp the Yard and Jumping the Broom, as well as TV turns on "Half and Half," "House of Payne," "CSI" and "Bones," are results of her dedication to the craft. She most recently worked on ABC Family's "Bunheads," a show about aspiring dancers.

"To work with Sutton Foster, Kelly Bishop and those delicious ballerinas – it was an incredible experience," she shares. "Amy Sherman-Palladino ["Gilmore Girls"], who created the show, is amazing. She's like a spitfire. She was a dancer, too, so she has that energy and language. It's just beautiful to watch her man the ship. There are a lot of strong women on that set, and they are amazing."

Valarie is also a recurring guest star on HBO's hit series "Treme," but she remains tightlipped about the role.

"I can't say too much, I had to sign a confidentiality agreement," she laughs. "She's a delicious character, though. I got the chance to work with Wendell Pierce who played my husband on 'House of Payne,' so that was awesome. To work with Khandi Alexander, whom my sister went to junior high school with, it was so extraordinary to work with that woman. Love those guys on 'Treme!'"

As far as Valarie's own guilty pleasures when it comes to TV-watching, she is a fan of "So You Think You Can Dance."

"I don't get to watch it as often as I would like to, but I do watch it. The dancers blow me away, and that show is bringing dance back into the forefront," she declares. "Shows are not as plentiful as when I was growing up, when every other show was a big dance show. With 'Glee' and 'Smash,' they're bringing it back so dancers can get work!"

Although she has garnered numerous acting accolades and praise for her vocal performances and releases, Valarie always considers herself a dancer first.

"Whether you continue on and make it your profession, there's nothing like a dancer's foundation and training. It will carry you through the rest of your life, that type of discipline," she says of the art form. "It's a work ethic, professionalism, giving your all and never settling – mediocrity is not part of one's vocabulary – always wanting to do the best and getting the best out of others. Dealing with all types of people from all facets of life, getting to travel and seeing how other people live opens so many doors that are just going to enrich your every-day life. Learning about respect for one's craft, and in turn respect for another human being, for what they do and bring to the table."

Dance has given so much to Valarie, and she, in turn, has blessed the entertainment world with her amazing talent. No matter where her career has taken her and what awards have been bestowed on her, there's one form of praise that remains most dear to her heart.

"I think the nicest compliment that I've received is that I have not changed. That means more to me than anything else in the world."

Velvet Sky is currently available. For more information, visit officialvalariepettiford.com.
Posted by Jigsaw Magazine at 10:15 AM