It's not often that one gets to collaborate with the artists that he looks up to in his youth. Growing up in Binghamton, N.Y., Stephen Kalinich never dreamed he would rise to international prominence as a groundbreaking poet and lyricist for such artists as the Beach Boys, P.F. Sloan, Diana Ross and Paul McCartney.

"By the time 1965 rolled around, I was in my early twenties. I sat in my room and thought about P.F. Sloan's 'Eve of Destruction,' about the Beach Boys and Motown. I ended up writing with all three of them," he shares. "Then, with Paul McCartney … I was scraping cellars for $80 a week, and I wrote this song: 'Dear Paul McCartney / enclosed are a few poems of mine / please read them through / and if you like them / drop me a line / I write them in the morning / I write them in the evening / in the cellars that I sweep.' I never sent it out, but I put the thought out in the universe and 45 years later I end up having him do one of my songs with Brian [Wilson], 'A Friend Like You.'"

Stephen releases his latest effort this week, a double album collaboration with Jon Tiven, a composer/producer/guitarist who has performed with bands from the Rolling Stones and Big Star to Alabama Shakes and Warpaint. On Shortcuts to Infinity, the lines of Stephen's lyrical poetry soar to Tiven's multi-instrumentation and guest spots by Willie Jones and Brian May. For the Symptomology disc, the two created the alter egos of Reverend Stevie Nobody and Jack #, who are in their late-20s and comprise the band known as Yo Ma Ma.

When Stephen mentions that Reverend Stevie Nobody would probably have a lot of tattoos, I ask him what a few of them would be.

"One might be George Harrison's words, 'Within You, Without You,' with the little initials of 'G.H.' underneath. I love that lyric," he says. "That's today, tomorrow I might say something from Paul Tillich, the German theologian's The Shaking of the Foundations: 'Shake the Foundation!'" 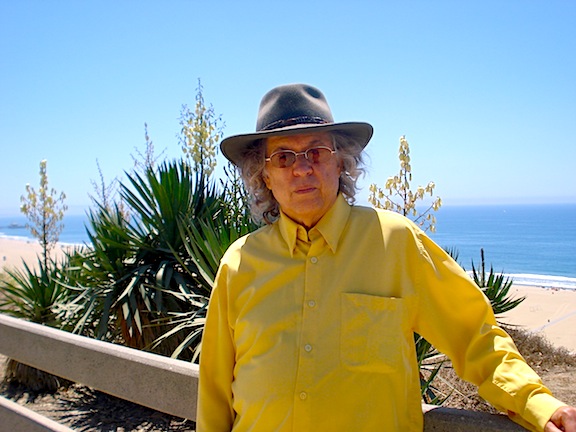 As Stephen and I discuss the new albums, it's hard not to be distracted by our beautiful surroundings in Palisades Park. Even though he has moved to the hills of Glendale, this area near Ocean Avenue and San Vicente Boulevard was his home for many years.

"I still come here and walk a lot," he confesses. "Years ago there was an artist, Victoria Sperry, who was in her 90s, and I worked for her, driving her around. She had all these places where she liked to come. I would help her walk, sit on a bench and we would look out at the ocean. You can walk along the path here or go down to look at the ocean and see the pier, the bicycle path, the people."

He has, however, settled into his La Canada/Glendale neighborhood on the east side of town quite well.

"I like going to this little bookstore where you can get coffee on Foothill Boulevard, past Verdugo Boulevard [Flintridge Bookstore & Coffeehouse]. Carol Schofield, the CEO of my record company MsMusic Productions, owns Foothill Records, which is on the left," he says. "I just love Los Angeles. Jon and I did a song, it's not on this album, but it's called 'Los Angeles.' It's about going to Downtown and seeing the homeless walking the streets. With all of its problems, it's such an exciting, alive and vital city. Sometimes where the most life is, the most dirt is. The real edge of life is where you see light, not in perfectly sanitized mansions. I'm anti-materialism in a lot of ways, but I know you need food and things like that. But to deify it is an atrocity."

Stephen's humble beginnings have definitely influenced his world view. His parents split up when he and his brother were quite young, which had a profound affect on him.

"I was about 12 or so and having a lot of problems adjusting. One time, I wanted to go away from society and be a monk. I always had a spiritual leaning, and I read books on psychology about improving yourself. I was doing terrible in school. I always wanted to get attention. I would try and make people notice me, which stems out of insecurity because I didn't have a father growing up," he remarks. "The poet developed as I got into my teens, when I started wanting world peace. I read everything: the Systematic Theology volumes by Paul Tillich, Kierkegaard, Sartre, Camus. And then, I hitchhiked across the United States."

At 19, Stephen embarked on a cross-country hitchhiking trip, ultimately landing in Los Angeles.

"There's a part in 'California Feelin'' that I wrote with Brian Wilson that is one of my first visions of Los Angeles. You've got to realize I'm from New York, it's really cold there and I never saw a lemon tree or an orange tree a grapefruit tree. In that song it goes, 'Look at the orange groves / and taste the grapefruit from a grapefruit tree / Feel the loveliness and beauty / of that California feeling.' It was like I felt the Righteous Brothers out of an orange, lemon and a grapefruit tree," he recalls. "That's one of my simplest lyrics, but people seem to love that song, just like 'Little Bird,' because beauty can be found in the simple things we do every day. Albert Einstein said, 'You can live as if nothing is a miracle, or you can live as if everything is a miracle.' I'm more on the side of everything's a miracle."

While studying at UCLA, Stephen immersed himself in the anti-war movement, writing and performing poems about World Peace. Eventually he was signed to the Beach Boys' Brother Records and penned several hits with Dennis Wilson, including "Be Still," "Little Bird" and "A Time to Live in Dreams." Over the years he has worked with artists like Mary Wilson, Art Munson, Randy Crawford and Odyssey. But it was his collaboration with P.F. Sloan that led to his current partnership with Tiven.

"I met Jon through P.F. Sloan. He and I were working together when he took my book, If You Knew, and put it to music. Tiven produced that album. At first when I met Tiven, I think I e-mailed him too much. We hit it off, though."

The trio took a spiritual journey to India in 2006, which resulted in Stephen and Tiven writing their first song together.

"We wrote a song called 'Everything's Exploding,'" Stephen tells. "I liked it because it brought out another side of me, I think that was the beginning of Stevie Nobody rising. Jon is a good complement, a good partner. We started talking, becoming friends every day and writing. We've written close to 500 songs."

Thirty-one of those songs appear on Shortcuts to Infinity/Symptomology.

"'Grow a Pair' is about the women in my life who boss me around, who try to take the male's alpha dominance," he laughs. "Humor is very important, but it has to be a combination of humor and meaning. 'Climb Stone Walls' symbolizes all the obstacles you have to overcome. I'm dealing with being Russian, Jewish, Christian, Born Again, Greek Orthodox – all these elements, how do I integrate it all. With Yo Ma Ma, if we have different opinions, I want to express them both. The beauty of it is: I can go off on a diatribe and then turn around the next minute and do something that's fun for people. These songs, no matter what age you are, you have a Yo Ma Ma, a youth in you. That's part of Yo Ma Ma, that we have – without being preachy – something to do in the world. We want to kick ass and have fun too."

As the years have passed, Stephen has come to develop a balance between idealism and reality, in his personal life, his poetry and his music with Yo Ma Ma.

"It may seem corny in this day and age, and people call me a hippie, but what I've grown into is that same poet from my youth but with the reality of how hard it is to make change in the world – how difficult it is, how you have to stand up for rights and maybe even fight sometimes," he says. "That really sounds anti-pacifist, but because of the nature of the world and how it is now, if you lay down and someone comes into your house and takes your children, I don't think that's right. Real peace needs some kind of strength. Even in The Art of War, Sun Tzu says you may never have to come to blows, but you have to let the enemy know you're in charge. The enemy could be deception, depression, whatever tries to get at your consciousness and pull you away from your calling. In my work, even with Jon, I don't spell it out like this, I just put it in a song like 'You Want What You Want' or  'Climb Stone Walls.' Whatever the case may be, just go for it outside, inside out."

Posted by Jigsaw Magazine at 9:03 AM