At Delancey Bar and Pizzeria


On the surface, Delancey might seem like your average bar and pizzeria. But what may appear to be a regular Italian restaurant to some, will forever be a treasured place for the five members of one of the city's fastest rising bands, Stars in Stereo.

"The first time we all worked together was at a studio next door. We just kind of stumbled across this place and ended up coming here every day for the next three months," says guitarist Jordan McGraw. "Delancey means a lot to us because we grew closer as a band here."

"Our first meal together was here, so it holds a lot of memories," adds vocalist Bec Hollcraft. "It's just a cool spot, too."

The rest of the group is just as enthusiastic about Delancey while telling me about their usual orders.

"They have awesome beer," begins drummer Drew Langan. "I normally go with the Downtown Brown and a Chopped Salad."

Bassist Justin Siegel says, "They have a different fish special here every few days, which is usually very good. I like that, and the Cucumber Carpaccio."

"I usually get the pizza," says guitarist Ryan "Frogs" McCormack. "They make damn good pizza. The thin-and-crispy crust and all of the toppings are really good. Everything works well together. The one with a sunny-side up egg and truffle butter [the Horatio] is so good."

While Jordan sticks to the Penne alla Vodka and a glass of the Allagash Curieux, Bec usually gets the Spaghetti with cherry tomatoes, olive oil and basil.

"I'm kind of picky with what I eat. I don't eat meat, and I try to stay away from dairy. Sometimes I eat fish, but I'm a wannabe vegan, that's the best way to put it," she says.

I take a sip of pear cider as Bec shares some of her favorite L.A. vegan haunts.

"The one I like most is in Silver Lake, which isn't so close to where I live, but it's worth the drive. Flore Vegan is so good; it's like vegan junk food. I also like Real Food Daily and M Café."

Bec is not only the group's only female and wannabe vegan, she's also the newest to the quintet. The four guys were formerly band mates in City (Comma) State. When it came time to start another project last year, they found their perfect frontwoman in Bec – who, after several years of touring as a solo act, was ready for something new.

"Now, these guys are my brothers," she says. "I'm much happier being in a band than being solo because I would have to travel out there alone, and it's so much better when you get to experience the excitement with other people. When I'm on stage, I feel like these guys have got my back and I've got theirs. It's a family. I love bouncing ideas off them and creating with them, too."

Bec is a Portland, Ore. transplant and, like most of Stars in Stereo (except Lakewood native Drew), didn't grow up in Los Angeles, but they've all come to love the city.

"I grew up outside of Boston, Mass., then I moved out here after college. It was nice growing up there, but there was way too much snow," says Frogs. "I like just about everything here. The weather's a lot nicer. All my friends moved out here, so my social circle lives here. The music industry – basically if I was anywhere else, I would feel like I was standing still."

"There's a little bit of everything here, so you can't really be bored. Anybody who says they're bored in L.A. is full of shit," laughs Justin, who grew up in South Florida. "I actually like the people. Some complain about the people who live in L.A., but ... wait, I only have four friends—"

"Let the record show that he pointed to the four of us in this group," interjects Frogs.

"No, seriously. If I didn't live here I wouldn't have met you guys," continues Justin. "I didn't start playing music until I moved out here, either. So that's a big part of why I love it here, because I started that chapter of my life here."

"I grew up in Texas and moved out here with my family," shares Jordan. "As soon as I finished high school I moved out on my own near the Sunset Strip. I used to walk to the House of Blues and go down to the Key Club for random shows. Metal Skool was always fun. There was a period when I went to Metal Skool every week." 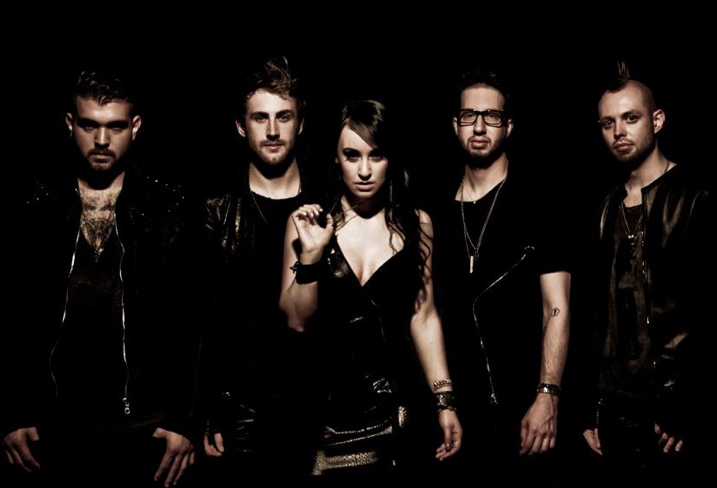 Nowadays, Jordan is more likely to be found hanging out at the Den or the Rainbow ("It's like going to the '80s") late at night. The self-confessed Disney freak also enjoys the occasional trip to Disneyland.

"I love the Nightmare Before Christmas, so the Haunted Mansion at Halloween is definitely my favorite ride," he says.

Bec likes to spend some of her free time going shopping.

"I love Melrose, searching through shops there," she admits. "Also, AllSaints is a great store. I like certain brands that I find at places like Urban Outfitters. I like LF, it's one of my favorite stores. There's so much shopping here. That's one of the things that I love about Los Angeles. I know it's girlie, but the shopping is amazing."

Drew, on the other hand, is the person who can steer you to the right sports bar to cheer on your favorite football team and can't wait until there's an L.A. team.

"I love the game, but because I was born and raised in L.A., I have yet to latch onto a team. Every year I grow more fond of one team than another, but I'm going to wait to pick a team for good until L.A. gets one," he says, before sharing his sports bar picks. "There's Big Wangs, which was my favorite for a long time. I've never had a bad time at Buffalo Wild Wings, either. There's a really cool Ravens bar called the Parlor. I'm not that big of a Ravens fan, but that's a fun place to watch a game."

I soon learn that Drew not only likes to watch the game, but likes to play it on the Stars in Stereo tour bus – well, virtually, at least.

"Drew and I may be the most competitive people on the planet, so we have an ongoing bet with 'Madden.' Loser has to shave a line in their eyebrow. I'm up 9-6, for the record," tells Jordan. "I  actually paused a game of 'Tiger Woods' before coming here. We'll play that all night, every night. I think everyone else hates that game because it's always on."

The band has spent a lot of time on road lately, opening for the likes of Foxy Shazam, Hoobastank and the Used.

"All the bands we've toured with have been some of the coolest people we've met," says Justin. "They each gave us an opportunity to learn something different. The Used do what they do and make no apologies for it, and they own the crowd. Foxy Shazam are probably, without a doubt the most interesting performers we've ever seen. And then Hoobastank's fans are almost a part of the band because they're so engaging. They make it look so easy. We've gotten to learn something from each of the bands that we've been on tour with. I don't think we could have asked for a better first set of tours for a new band."

Whether they're on the road or rehearsing together here in Los Angeles, the band is always writing new material.

"Writing is like therapy for me. If I'm going through something I just write it down, and it helps," says Bec. "We all like to write. We all come in with ideas, sit in the studio and figure out what we're clicking with the most. And we don't leave the studio until we're happy with it. It's really important that everyone is stoked on everything, and that is represents everyone."

One song that not only resonates with all of the members in the band but also with many of the crowds they've reached on tour is "The Broken."

"Everyone feels broken at some point in their lives, I know I've been there," confesses Frogs. "It's one thing that connects us to our audience. A lot of our lyrics talk about not just being broken but being able to come out of stages of being broken, how we could all come together and help each other out."

"I can say that whenever I sing that song it upsets me the most out of all of our songs. It comes from a really personal place," adds Bec. "Growing up, I struggled a lot with that feeling of isolating myself because I felt different or unique or weird or like an outcast. It's liberating every time I sing it. I just want to scream, 'I'm broken, and I don't care!' It feels good, and it's cool to see people start to learn the song on these tours. We write these songs about our internal struggles, but we really people to be a part of our music. So it's really amazing to see that reaction from the audience."

After wrapping up some dates with the Used, the band is crossing the nation with Blue October to reach even more audiences. With their self-titled debut album on the horizon, Stars in Stereo plans to spend as much time on the road as possible.

"I think that's where we excel the most: giving a great show," says Bec. "We put everything into our shows."

"We've had the opportunity to learn from some of our favorite bands," adds Drew. "We really know how to focus all of our energy on connecting with our audience and putting as much as we possibly can into the time that we're on stage."

Posted by Jigsaw Magazine at 8:57 AM