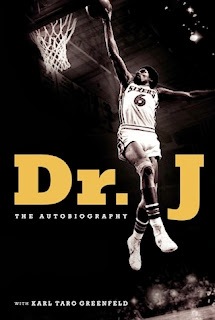 
Julius Erving @ Barnes & Noble (The Grove)
Long before Blake Griffin, Jeremy Evans and Terrence Ross were even alive and dreaming of flashy slam dunk maneuvers, Dr. J took home the very first All-Star Game dunk title in 1976. If you have yet to be schooled in the basketball great's other accomplishments off and on the court and above the rim throughout his ABA career and 10 years as a 76er, the Dr. J: The Autobiography that was released last month should definitely be added to your holiday wishlist. Better yet, head down to the Grove this afternoon to pick up a copy and have it signed by the legend himself.


In Theaters This Week
Ron Burgundy fans rejoice! The long-awaited sequel to the 2004 comedy, Anchorman 2: The Legend Continues, finally hits theaters with all of the beloved characters played by Will Ferrell, Paul Rudd, Steve Carell, David Koechner and Christina Applegate; Spike Jonze's Her, starring Joaquin Phoenix, Amy Adams, Rooney Mara and the voice of Scarlett Johansson, begins a limited run; The BBC series "Walking with Dinosaurs" makes its way to the big screen for a live-action/CG-animated, 3D adventure with the voices of John Leguizamo, Justin Long and Karl Urban. Also in theaters: Dhoom 3; The Past

It's A Wonderful Life @ The Cinefamily (Mid-City West)
I couldn't believe that my boyfriend had never seen the Frank Capra classic, so I forced him to watch it last Christmas. I wish I waited until this year, though, since the Cinefamily is screening it in 35mm every day from now until Dec. 26. If you still know anyone that hasn't seen it or if you could never possibly get enough of George Bailey, tickets are just $12.


"Stomp" @ Saban Theatre (Beverly Hills)
For over two decades, the percussion group has delighted audiences around the world with their creative use of found items, from matchboxes and brooms to garbage cans and Zippo lighters, to fill venues with sound. Their explosive shows incorporate dance, music and theatrical performance for an electrifying experience that audiences of all ages will enjoy. 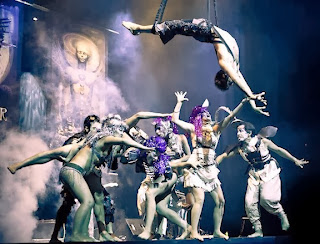 
Lucent Dossier Experience @ The Fonda (Hollywood)
The Fonda is an ideal venue to experience the wonder that is Lucent Dossier up close and personal, and what better night to see them on than the longest of the year, Winter Solstice? The L.A. troupe unveil a new stage show, Solstice of the Dreamers, which combines dance, aerial arts, futuristic clowns, electronic and live music from Black 22's, in a post-apocalyptic vision of the world. Leave reality outside the theater doors, and step into the realm of Lucent Dossier.


Ugly Sweater Run @ L.A. State Historic Park (Elysian Park)
It seems like ugly holiday sweater parties are all the rage this year. Why not up the ante and sign up for this 5k that snakes around and through the park? The race begins at 11 a.m., and hot chocolate, Angry Orchard Hard Cider and Sam Adams Winter Lager are going to be served at different stations throughout the course. if you just want to watch, there are photo stations and holiday music at the start and holiday goodies, awards for best mustache, beard and sweater after the race.


Stevie Wonder @ Nokia Theatre (Downtown)
The Motown legend hosts his 18th annual House Full of Toys benefit concert, which collects and distributes toys and gifts to people in need. This year, Wonder has announced that he will perform his 1976 landmark album, Songs in the Key of Life, in its entirety at the show. He has hinted that several of the R&B, soul and jazz greats and musicians who played on the album will join him on stage for all of the songs that many of us know each and every word to, like "Isn't She Lovely," "As," "Sir Duke," "I Wish" and "Knocks Me Off My Feet." 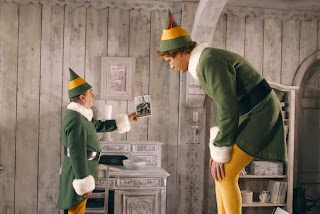 
Elf @ Aero Theatre (Santa Monica)
It's hard to believe it's the 10th anniversary of Jon Favreau's Christmas comedy that spawned a spaghetti with maple syrup craze, as well as a Broadway musical, and introduced the world to Zooey Deschanel's pipes. American Cinematheque celebrates the anniversary with a screening of the film that stars Will Ferrell, James Caan, Bob Newhart and Mary Steenburgen as part of their Holiday Spirit on the Big Screen series. Other screenings include Auntie Mame and White Christmas (Dec. 19), the first two Die Hards (Dec. 20), It's A Wonderful Life (Dec. 20, 21 & 23), The Bishop's Wife (Dec. 22) and The Poseidon Adventure (Dec. 28).


Woody Allen & His New Orleans Jazz Band @ UCLA's Royce Hall (Westwood)
For fans of his films and anyone who has seen Barbara Kopple's 1997 Wild Man Blues documentary, it's no secret that Woody Allen loves jazz, but few probably know that 2013 marks the 40th anniversary of his musical performance career, which began at New York's Michael's Pub. Since the late 1990s, Allen and his New Orleans Jazz Band have performed a Monday-night residency at the Carlyle Hotel, building a repertoire of over 1,200 songs. With Allen on clarinet and band director Eddy Davis calling out the playlist as the night progresses, the Royce Hall audience is sure to be treated to several improvised numbers as well.


L.A. County Holiday Celebration @ Dorothy Chandler Pavilion (Downtown)
Looking for a way to occupy the kids for a few hours before Santa visits? Since 1959, the L.A. County Arts Commission has offered this cost-free event to Angelenos, and it's become the city's biggest holiday show that was even nominated for an Emmy. More than 20 choirs, music ensembles and dance companies represent the vast diversity of Los Angeles' neighborhoods and cultures in the three-hour celebration.


Have a very Merry Christmas!!!

Posted by Jigsaw Magazine at 8:27 AM