The Royal Concept @ The Roxy (West Hollywood)
After garnering two HypeMachine hits, "D-D-Dance" and "Gimme Twice" last year, the Swedish foursome signed to Lava and released the Royal EP in September. I am totally smitten with "On Our Way," just one of the tracks from the EP, which they have been touring the states in support of for the past month. They make their way to the legendary Roxy stage tonight, and with influences as diverse as Simon & Garfunkel, Daft Punk and the Strokes, you can bet that the rest of the songs in their arsenal are just as addictive.


S.I.D.: Superman Is Dead @ Subliminal Projects (Echo Park)
The influence of the Sex Pistols' Sid Vicious is incredibly far reaching, although he only lived to the age of 21. Even if you're not a huge punk fan, his image is instantly recognizable. And now, Los Angeles' Shepard Fairey has teamed with British photographer Dennis Morris for a new collaborative exhibition of paintings, prints and photographs of the music icon (born John Simon Ritchie), which also features a life-size replica of a hotel room destroyed by Vicious in 1977. The pieces that fuse their unique styles with one another are stunning. Tonight's opening reception for the exhibit that runs through Jan. 11, 2014 features a once-in-a-lifetime performance by Ritchie Love, composed of Sex Pistols guitarist Steve Jones, Billy Idol, Leigh Gorman and Clem Burke. This is a must for any Sid Vicious devotee, and tonight's show shall prove unforgettable for any punk lover.


In Theaters This Week
Christian Bale with a combover, Bradley Cooper in a perm and a Jennifer Lawrence/Amy Adams kiss – who isn't down for David O. Russell's 1970s mafia drama, American Hustle; I am such a geek for J.R.R. Tolkien that I literally just yelled out, "YAY, finally here," at The Hobbit: The Desolation of Smaug's release this week. Ian McKellen, Martin Freeman, Lee Pace, Orlando Bloom and all of the dwarves return in Peter Jackson's continuation of the Tolkien classic, with the added character of Tauriel ("Lost"'s Evangeline Lilly). Tom Hanks as Walt Disney and Emma Thompson as P.L. Travers in Saving Mr. Banks, the story of bringing Mary Poppins to the big screen. Also in theaters: Here Comes the Devil; Hours; Tyler Perry's A Madea Christmas

Lightning Strikes: A Jerry Bruckheimer Retrospective @ Egyptian Theatre (Hollywood)
American Cinematheque pays tribute to the prolific film and television producer with a four-day film series with double features of several of his biggest hits. The retrospective begins this evening with two films directed by Tony Scott and starring Tom Cruise, 1986's hallmark of my childhood Top Gun and 1990's Days of Thunder. Bruckheimer joins the fun for Saturday's program which kicks off with him signing copies of Michael Singer's new book, Jerry Bruckheimer: When Lightning Strikes – Four Decades of Filmmaking, followed by the Michael Bay-directed The Rock and Bad Boys. In between Sunday's screenings of Thief and American Gigolo, there's a discussion with Thief director Michael Mann, and Monday's double feature of Enemy of the State and Black Hawk Down caps things off. 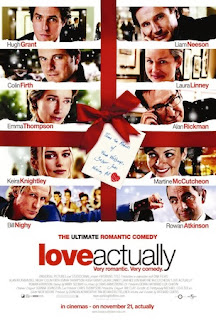 
Love Actually @ Electric Dusk Drive-In (Downtown)
Since it was raining last weekend, the screening of Love Actually has moved to this evening and there are still a limited amount of tickets left. Act now to experience my favorite holiday rom-com ever at the drive in. The 2003 Richard Curtis film weaves several storylines together that simultaneously make you laugh and cry, leaving you a mushy, sentimental mess. There's the dashing Prime Minister (Hugh Grant) who falls for a staff member, Bill Nighty as a washed-up rocker, Colin Firth as a writer who finds love with a Portuguese housekeeper, Mark ("The Walking Dead"'s Andrew Lincoln) who is hopelessly in love with his best friend's wife (Keira Knightley), a dedicated sister (Laurey Linney), a grieving widow (Liam Neeson) and his stepson, a couple (Alan Rickman and Emma Thompson) dealing with adultery, adorable porn stand-ins (Martin Freeman and Joanna Page) and Colin (Kris Marshall) who heads to America to put his British accent to use in picking up some ladies.


Deap Vally @ Bootleg Theater (Westlake)
It seems fitting that Deap Vally are headlining this Christmas Sweater Festival since the duo first met at a class where drummer/vocalist Julie Edwards taught guitarist/vocalist Lindsey Troy how to crochet. Make sure to wear your most hideous Christmas sweater to rock out to songs from the ladies' debut, Sistrionix, released earlier this year. The night also features performances from Western Lows, Boardwalk, Heaven and Crash, and all proceeds benefit the Pablove Foundation.


The Second City's "A Christmas Carol: Twist Your Dickens!" @ Kirk Douglas Theatre (Culver City)
If you've never heard of Chicago's improv comedy troupe, the Second City, let me enlighten you with just a few of their notable alumni: Alan Arkin, Bill Murray, Dan Aykroyd, Gilda Radner, Tina Fey and Tim Meadows, among many others, including Peter Gwinn and Bobby Mort, the writers of this holiday comedy that returns for another L.A. run this year. Both have worked on "The Colbert Report," and this hilariously irreverent satire of Charles Dickens' A Christmas Carol stars some of the group's brightest stars – as well as guests like Casey Affleck, Mindy Cohn, Jane Kaczmarek, Rhea Perlman and Matthew Modine – so you know you're in for a great time. Through Dec. 29.


Taste of Tamales @ La Placita Olvera (Downtown)
I would always look forward to Christmas Eve, when my childhood best friend would make piles of tamales with her family and bring us a few bags of the masa-encased goodness. No other food says family and the holidays to Mexican-Americans quite like tamales, so it's no wonder that there is an annual festival here in Los Angeles to celebrate the food. You can enjoy every tamale flavor imaginable from a variety of L.A. vendors and restaurants, musical performances, arts and crafts, carnival games and free toys for children on a first-come, first-served basis from 10 a.m. to 6 p.m.


Joe Manganiello @ Barnes & Noble (The Grove)
C'mon, guys, you know that you would kill to have a body like the "True Blood" and Magic Mike star. You're totally in luck because he just released a new fitness book called Evolution: The Cutting Edge Guide to Breaking Down Mental Walls and Building the Body You've Always Wanted. In it, he helps you clear your mind to envision your body transformation, gives you the tools to do it and the ability to maintain the focus to keep up the program. You can meet your body-sculpting inspiration when he visits the Grove store to sign copies of the book at 7 p.m.

Posted by Jigsaw Magazine at 11:46 AM