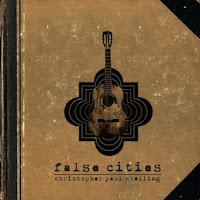 Christopher Paul Stelling – False Cities (Mecca Lecca/Dollartone)
The Brooklyn-based troubadour presents the follow-up to Songs of Praise and Scorn, his debut from last year. If you're looking for a fresh spin on Americana gothic folk, then Stelling is your man. From False Cities' opening track, "Brick x Brick," to the contemplative "Who I Am" and "Writhing in Shambles," there is sure to be at least one song that touches a chord with you.

Clairy Browne & The Bangin' Rackettes – Baby Caught the Bus (Vanguard)
If your only exposure to the Australian group has been seeing them perform "Love Letter" in Heineken's The Switch ad, let me assure you that there is even more to fall in love with on their debut album. Throughout Baby Caught the Bus, Browne's smoky and powerful voice shines, whether she's coaxing you to get up and move with "Frankie" or pulling at your heartstrings on "You Don't Owe Me Nothing." No other band around right now can blend soul, blues, doo-wop, jazz and R&B quite as well as them.

Daft Punk – Random Access Memories (Columbia)
Although most members of the Daft Club have already gotten their fix of the album since it began streaming on iTunes last week, there's still a bit of excitement to be had from actually holding a physical copy of the French duo's first studio album in eight years. If you haven't already fallen victim to the Daft-ified funk of "Get Lucky" (featuring Pharrell Williams on vocals), then you must give it and "Lose Yourself to Dance" (also featuring Williams) a spin ASAP since they're my favorite tracks on the effort. Other collaborators include Julian Casablancas, Paul Williams, Panda Bear and Todd Edwards.

The National – Trouble Will Find Me (4AD)
Matt Berninger has such a distinctive voice, that songs from the New York band are immediately identifiable. The quintet's sixth album continues to pull listeners into their world of heartbreak and melancholia with Trouble Will Find Me, beginning with first single "Demons" on into "Heavenfaced," "Slipped" and "Humiliation." They bring the new tracks to the Greek Theatre on Aug. 10.

Japanther – Eat Like Lisa, Act Like Bart (Recess)
Since meeting at the Pratt Institute circa 2001, Ian Vanek and Matt Reilly have made a habit of being unconventional. If the title of their latest album doesn't doesn't make you smile, then you probably shouldn't give them a try. Their punk-infused melodies are guaranteed to have you dancing around the room, shedding all inhibitions. Their live shows are just as invigorating, so make sure to check them out June 30 at the Growing Up Is Dumb festival in Highland Park. 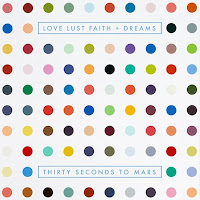 Thirty Seconds to Mars – Love Lust Faith + Dreams (Virgin)
I haven't been this excited about an album from 30STM since their 2002 self-titled debut and its follow-up (2005's A Beautiful Lie). While many either love or loathe the band merely for the identity of their lead singer/songwriter, Jared Leto, he is just one-third of the act that includes one of the most explosive drummers of our generation, Shannon Leto. Just watch Shannon pound the skins with the taiko drummers in the short film for their lead single from Love Lust Faith + Dreams, "Up In The Air." The video also features Dita Von Teese, gymnasts McKayla Maroney and Jordyn Wieber, artist Maxwell Snow, models Ashley Smith and Anastasia Krivosheeva, the USC fencing team, lions and zebras – oh my. They're holding a very special Church of Mars at the First Unitarian Church of Los Angeles tonight (click here for details).

Also available – The ABC's of Death; Atomic Age; Gregory Crewdson – Brief Encounters; In My End Is My Beginning; Last Kind Words; Love Sick Love; Open Road; Picture Day; That Was Then This Is Now; This Girl Is Badass; The Visitor (Cibrail); Yossi

Posted by Jigsaw Magazine at 10:53 AM