For over 62 years, Carroll & Co. has remained a constant fixture in the lives of Angelenos. From investing in his first power suit to stocking up on warm sweaters for an upcoming ski trip to Mammoth, the fine menswear retailer carries whatever item a man might be missing from his wardrobe.

Filling a void is exactly what Richard Carroll had in mind when he set up shop in 1949. At the time, he was working as a publicist for Warner Brothers Studios, but when he couldn't find a suit for his brother's wedding on the west side of town, the idea to use his passion for quality menswear to go into business for himself was born. Through his studio connections, celebrities like Clark Gable, Fred Astaire, William Holden began to sport Carroll & Co. clothing. Over the years, the retailer maintained a steady relationship with Hollywood, with luminaries such as Frank Sinatra, Gregory Peck, Jimmy Stewart, Tom Cruise, Robert Redford and Harrison Ford as patrons. Carroll & Co. provided wardrobe pieces for television shows ("Charlie's Angels," "Dynasty," "The West Wing"), politicians (President Gerald Ford, U.S. Senator Alan Cranston) and the cast of the George Clooney film The Ides of March.

In the mid-1990s, Carroll's son John assumed the official duties of running the business, and ever since, the retail operation has continued to grow. John took some time out of his busy schedule to show me around the store, provide insights to their recipe for success and share some holiday gift ideas. John started working in the store in his teens, and the road to becoming President of the company wasn't a breeze just because he was the owner's son.

"Starting out, I did all the grunt work. I vacuumed, ticketed shirts, moved merchandise, cleaned out storage closets. Just because I was the son didn't mean that I had immunity from all that," he shares. "It was, 'learn the way that everybody else does,' and that's how I got started."

One of his most profound learning experiences was accompanying his father on a buying trip to Europe in the late 1970s.

"In those days, if you wanted to buy the line you couldn't only go to London or Florence or Rome, you had to go to the factories. He used to drive from London to Edinburgh, with appointments along the way, so it was about a two-week trip. He would go to Galashiels, Hawick, Glasgow and Northampton, where the knitters, fabric weavers and leather, tie and shoemakers were. I was able to see guys hammering on the shoes, the way the looms knit the cashmere. I saw how intricate it is to hand link a sock at the heel and toe," John remembers. "I began to appreciate how things were made. You buy a pair of pants, and they're an expensive pair of slacks, but when you see what goes into them from behind the scenes, it makes a big difference."

Richard really did instill a dedication to quality in all aspects of menswear fabrication in his son, who continues the tradition of supporting small, family-run manufacturers to this day.

"We don't do business with a lot of designers or big-name people. Most of the companies that we work with are passed down from generation to generation, where the father handles the factory side, the mother handles the accounting side, the son handles the sales side and the daughter handles some of the design – a lost art in many industries. Many companies that we work with have no other accounts in the United States," says John. "It separates what we do from a lot of department stores that carry a lot of beautiful merchandise, but it's [about] a name or a brand. Our brand is Carroll & Co., and we try to make it geared towards our customer and what we feel should be portrayed as our image."

It is this commitment that truly sets them apart and, along with a few other attributes, has allowed them to flourish as a family-owned business. 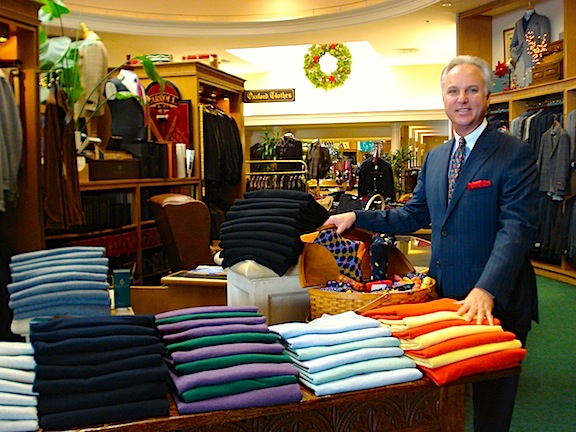 "It's our quality of merchandise, the best customer service and tailoring – we have our tailor shop on the premises – that are the core three elements to what we've done since we opened. And I'm very involved. I'm here every day; I'm not an absentee owner. I know a lot of the customers who walk through the front door, I do all of the buying and oversee all the advertising," he admits. "I wouldn't call it a labor of love because I wouldn't use the word 'labor.' It isn't laborious, it's a love of what I do. Hopefully that carries through."

One glance at all the beautiful suits, hats, shoes, belts and sweaters on the shelves, and you feel the Carrolls' passion coursing through the store. Since it's the holiday season, there's a huge Christmas tree at the front entrance, and twinkling white lights, stockings, wreaths and red poinsettias accentuate the festive mood. John gets into the spirit by sharing some holiday gift ideas.

"There are few tried-and-true items that we continue with every year. We've always been known for our knitwear. We have about 800 cashmere sweaters in the store. Every year, one of our mainstays is our Cashmere Sweatshirt, which we have in 32 different colors. It's knitted in Scotland by the same people who have been doing it for about 30 years; we haven't changed it. We have customers who really collect them. A lady may come in and say, 'I just have to get him another color this year,' and she buys a fuchsia or a dark green."

"Also in knitwear, we've brought back our 8-Ply Cashmere Shawl Collar Cardigan, which is a bulky, very warm and luxurious sweater."

"For the man who has everything, there's the Italian Smoking Jacket. Believe it or not, we do a nice little business on our velvet smoking jacket, which has sort of surprised us the last couple of years."

"We have a beautiful Italian Perforated Suede Jacket this year, which is not really an outer jacket. It's a sports jacket and tailored as such."

Posted by Jigsaw Magazine at 8:32 AM