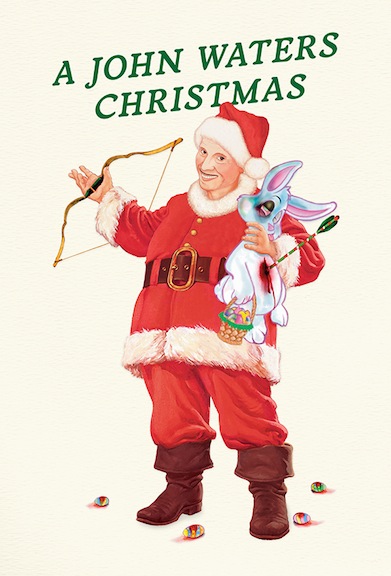 
"A John Waters Christmas" @ The Wilshire Ebell  (Mid Wilshire)
Ho ho ho! The iconic filmmaker and comedian expands upon his unorthodox holiday album from 2004 with this critically-acclaimed one-man show. If his stories of giving and receiving perverted gifts, a religious fanaticism for Santa Claus and true tales of holiday horror don't give you the giggles, then your name's Ebenezer.


Denis Leary @ Barnes & Noble (The Grove)
The comedian/actor released his latest book, Merry F***in' Christmas, at the end of October and sings copies tonight. This adult parody of a children's book hearkens back to the 1994 film, The Ref, he starred in, taking aim at all the wonderful – and crappy – aspects of the holiday season.


Bloc Party @ The Palladium (Hollywood)
I saw the quartet's appearance on "Later… with Jools Holland" on Palladia the other night, and fell in love all over again as they performed "So He Begins to Lie." The song is from their fourth album, fitting titled FOUR, that was released over the summer, and while watching them on TV or listening to the album at home are great, nothing compares to the fantastic energy these Brits bring to a live show.


Turbo Fruits @ Los Globos (Silver Lake)
Can't think of a better way to relieve some holiday shopping stress this Saturday night than getting all sweaty with Turbo Fruits. Butter, their latest full-length, was produced by Jim Eno and released on Kings of Leon's Serpents & Snakes imprint earlier this year. You should download a copy now, so you can sing along to your heart's content at Los Globos.

The Neighbourhood @ Bootleg Theater (Westlake)
If you have yet to hear this band from my 'hood, then you need to check out their I'm Sorry EP now – "Sweather Weather" and "Female Robbery" in particular. The fivesome just wrapped up their opening gig with Paul Banks and kick off a December residency at the Bootleg (also Dec. 16 & 23) and the Constellation Room (Dec. 10 & 17) tonight.


Brewing with Michael Phillips @ Handsome Coffee Roasters (Downtown)
If you're a coffee connoisseur, then join Handsome Coffee co-founder and 2010 world barista champion Phillips as he teaches you how to make the perfect cup using an AeroPress and min Porlex hand grinder. With the $45 fee, you also get a brewer, filters and a 12-ounce bag of coffee. On Dec. 18 he gives instruction on French press and clever steeping.


Gus Van Sant Double Feature @ Egyptian Theatre (Hollywood)
The American Cinematheque pays tribute to the director with a double feature of two of his most unforgettable films 1997's Good Will Hunting and 1995's To Die For. Van Sant is going to be on hand for a special sneak preview of his latest, the upcoming Promised Land, which stars and features a screenplay by Matt Damon and John Krasinski.


alt-J @ The Fonda (Hollywood)
This UK-based group had been simmering on the cusp of breaking out for a while, and with the release of their debut album, An Awesome Wave, they've reached full boil. Having garnered critical raves, the Mercury Prize and sold-out shows across the country, I guarantee after seeing them perform live, you'll be won over as well.