If you’ve never visited Hollywood Forever, you probably find it a bit strange that singer-songwriter Crown Jwlz calls the cemetery her favorite place in Los Angeles. After spending even a little time at the Hollywood landmark, you might feel exactly the same way.

“This is the perfect place to come and reboot,” says the L.A.-based rock artist. “Hollywood Forever has that dark energy, but it really depends on how you look at death. Death to me is not a finite ending, so I don’t see it as a negative.”

It’s hard to be very negative when you’re surrounded by lush, green grass, tall palm trees, a serene lake and gorgeous monuments to people’s family members and celebrities like Mickey Rooney, Douglas Fairbanks, Rudolph Valentino and even the dog that played Toto in The Wizard of Oz. As we take a seat across from a statue of Johnny Ramone, Jwlz tells me that she grew up loving punk music, especially the Ramones, in her native Dallas, Texas. This transitions into a conversation that touches on her musical upbringing, influences and debut EP, California King, which is set to be released next month. 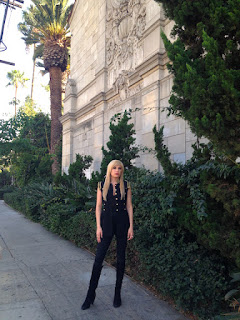 “I remember being about 6 when I started to notice that I was musical. My friend Amanda and I wrote this cheesy song about being best friends on a little keyboard. It reminds me of that Zack Attack song, ‘Friends Forever,’ from ‘Saved by the Bell’ – on that kind of level,” she laughs. “I would always write stories and was strong in English in school. I had a knack for words, rhyming and rhythm since I danced from when I was 2 – ballet, tap, jazz, modern – until I was 19. Tap was always my favorite because it was so rhythmic.”

Throughout our interview, Jwlz is quick to smile and laugh, even at her own expense. She recalls being a step behind the rest of her class on old recital videos since she was a year younger than everyone else and eventually using that dance background to her advantage as her cheerleading squad competed against other schools.

“I went to an all-girls Catholic private school, so we cheered for the girl volleyball and basketball players. It was athletic, we were serious and it wasn’t a joke,” she remembers, before adding, “We were the punk rock cheerleading squad, thought, getting in trouble for dyeing our hair and getting piercings!”

While her mother was responsible for pushing Jwlz into dance at a young age, her father was the one who provided her early musical education.

“The first concert I ever went to was Bon Jovi after that ‘Shot through the heart’ [‘You Give Love a Bad Name’] phase because of my dad. He took me and my sisters to see ZZ Top and Carlos Santana at the Texas State Fair. We were going on rides, then and he said, ‘OK, girls, we’re going to pause the rides now because you have to see these musicians.’ We were so annoyed with him, but it ended up being amazing. ZZ Top are from Texas. [Their drummer, Frank Beard] went to Irving High and was one of the first people to get kicked out for having long hair,” she proudly informs. “My dad has amazing music taste. He may not be a rock star, but he’s such a rock star. He gave me roots in classic rock, which definitely feeds into what I’m doing now.”

As she began to form her own likes and dislikes, a few artists stood out from the others.

“Thom Yorke from Radiohead, for his songwriting ability and his innate sense of musicality, David Bowie and Freddie Mercury for the same reasons and also their level of theatrics, presentation, showmanship – I connect to all three of them a lot,” she shares. “I also remember Gwen Stefani when I was younger, seeing her in her sports bra and track pants in the ‘Just A Girl’ video and thinking, ‘This is the first girl I’ve seen in a long time – other than  Pat Benatar, Blondie, Joan Jett, Janis Joplin who are amazing examples of strong women in rock – who was not over sexualizing herself. There’s nothing wrong with that, everybody has their own way of presenting their art, but as a rock musician, a tough punk rocker and somewhat of a tomboy at the time (Especially with a very traditional South African mother of four daughters, who made me wear everything pink. It was very much: Be a girl. I’m girly, but I’m a tough girl.). Seeing Gwen rocking out, not giving an F about anything I was like, ‘Whoa, I haven’t seen a girl do this in a while with this level of strength, commanding the stage in front of these men and owning it in such a masculine yet feminine way. I respected it so much.” 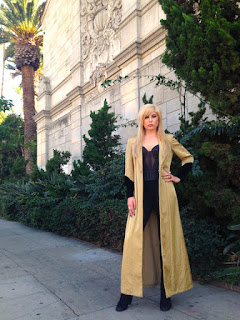 While her sisters took piano lessons, Jwlz never did. Yet her desire to play music was evident at an early age.

“We had a grand piano growing up, and when I was 7 or 8, I would sit in front of it at Christmastime and teach myself songs like ‘Silent Night’ and ‘Jingle Bells’ by ear,” she says. “I’ve always had a really spot-on ear, which made it easier once I began studying music theory.”

After graduating high school, Jwlz studied music and business (“because I have a crazy smart Italian businessman father who always ingrained the importance of balancing both sides in my head, and I love that he gave me that influence”) at the University of North Texas. At that point, she was already planning on making the move to Los Angeles to pursue her musical career.

“Having really big voice and coming from a classical and somewhat of a jazz background, a lot of the vocal coaches and teachers that I had been studying with were pushing for me to go to New York, so I was always planning for that. Then I backup sang in a punk band in high school once at a show and once for a recording they did in their garage, and that kind of changed everything for me. I decided that since wanted to write my own words as opposed to singing somebody else’s words, I was going to L.A.”

After arriving in Los Angeles, she knew it was the right move for her.

“When I got to California, it was like everything makes sense now. It’s so liberal, free, diverse, with so much going on culturally with art. I was lucky when I got out here to meet a lot of visual artists. I went to museums and found out about different visual and street artists, fashion, and those things started to feed into and influence my music. All art feeds other art. Anytime I’m feeling stuck in my own art, I look to other mediums to break any block I have,” she reveals. “The more you practice your creative muscle, the more your juices will flow. People who are having a block should force themselves to write, draw, paint literally anything they see. Work that creative muscle, and eventually something is going to be good. Look at rap artists, they create so much content, cut 20 songs and 17 aren’t even used. The three that are, are amazing.”

Jwlz went on to graduate from the Musicians Institute in Hollywood and eventually assembled a group of support musicians that she dubbed “The Royal Court.”

“I wouldn’t call myself a pianist or guitarist by any means. I can play chords on guitar and piano to write my music and come up with melodies, but I work with musicians who do their jobs very well,” she says. “There may come a time I play rhythm on stage – a little piano or synth here and there – but I work with Nick Annis, my guitarist and music director. He’s incredible and also plays with Scavenger Hunt and Kesha. My drummer Zak St. John (Stevie Wonder, the B52s) is amazing. Gabe Rudner plays keys and synth, Eliot Lorango is on bass, the girls that sing backup are Nikki Wilkins and Lorelei Sinco – they are all incredible.” 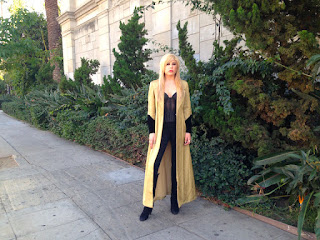 Crown Jwlz is backed by the sextet on her upcoming EP, which also has a royally themed name: California King, and was produced by Max Coane (Jack’s Mannequin), Maxwell Moon (Macy Gray) and Erik Belz (will.i.am, Juicy J), mixed by Noah Georgsson (The Strokes, Little Joy) and mastered by Ted Jensen (Muse, Florence + The Machine). The moniker pokes at the idea that only a man can be supreme ruler and is a hint to the powerful and fiery sentiments found within songs like the release’s first single, “Without You” and “Party Past the Sunrise.”

“My last band had this crazy house where we all lived, and ‘Party Past the Sunrise’ was literally written about that house. My friends and I will be out somewhere until 1:30 a.m. then head to one of the multiple after-hours in Los Angeles or a house party in the Hills to watch the sunrise while in a hot tub with a glass of champagne. It’s L.A., so that stuff happens,” she grins. “‘Party Past the Sunrise’ was written about those moments when the sun rises, and you say, ‘Wait, we’re having too much fun. We should go to Venice, spend the day at the beach, have a Bloody Mary and keep going.”

Jwlz is all about being independent and female empowerment, but she is also about having fun. She loves to travel to the homeland of her paternal side of the family and recently spent a month in the Philippines.

“My best friend from high school, Nicole, is an intuitive body worker and healer and studies with a teacher in the Philippines that she had met on a trek in Nepal. He had a vision while doing a reading on her, and in the reading, I came up. A year later she visited him again, and he said, ‘This girl is popping up again like a bouncy ball. I have to meet this amazing energy,” she relays. “So I went for six weeks. I meditated did yoga, surfed and ate super healthy every day. Doing all these fun things and working with this spiritual healer, I wrote the majority of the EP there. It was healing, cleansing, inspiring, invigorating – exactly what I needed.”

Sometimes we all need to have our cup refilled, to refresh our creativity. Jwlz feels like living in Los Angeles and going to places like Hollywood Forever definitely refuels her creative fire. The city has definitely become her home.

“I love Los Angeles. It’s a place where you’re allowed to express yourself and take it as far as you want. I’m not trying to talk trash about Texas, but it’s not exactly the pinnacle of individuality. I’m lucky to live in a place that’s diverse, accepting and with so much going on. Whatever you want to discover on any given night – if you want to go to this type of show with this type of artist, a fashion show or even just a movie – it’s amazing what you can do here,” she concludes. “I don’t think people who grew up here understand how incredible it is coming from somewhere that’s completely flat to where you know that you can go to the mountains and the beach in the same day. Los Angeles is a breath of fresh air; it just feels like peace and home.”

Posted by Jigsaw Magazine at 9:30 AM