“I’ve been doing art my whole life, since I was a little kid, and street art for 20-plus years. I grew up with people like RISK [Kelly Graval] and Estevan [Oriol]. I did art with Skate, who died when he was hit by a train, and other friends who were more into graffiti while I would take cans of paint and splash them onto walls in an alley like abstract paintings,” says artist Guerin Swing. “For me, I’ve always kind of been in the street art community, but I never really even considered myself a street artist. I just do fun stuff.”

“I’ve had over 100 employees that are artists work for me over the years, and they would say, ‘You have to see Exit Through the Gift Shop, but I only just recently watched it. The funniest thing of all is I actually know Theirry [Guetta, “Mr. Brainwash”] from when I was 18 in Hollywood. He worked down the street; we used to party together,” he continues. “I’ve done shows with Shepard Fairey, gone over to Retna’s studio – I’m pretty involved in the street art community without realizing it. ”

The L.A. native has worked hard to be at a place where he can create street art pieces for fun while balancing orders for commissioned art pieces and jobs for his incredibly successful interior design business. It’s no wonder that when I arrive at his studio, which is housed in the headquarters for Guerin Design & Development in North Hollywood, Guerin is sipping on an energy drink. Aside from fulfilling design jobs, he is also preparing for an upcoming solo art show at Lab Art, but takes some time to give me a tour of the studio, explain some of his pieces and share some insight into his artistic beginnings. 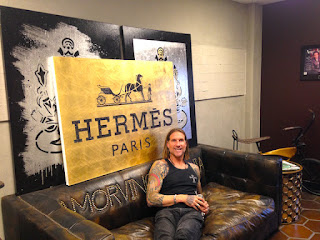 “When I was in junior high, I wanted to be an animator. My uncle was an animator, doing cool things like the Pillsbury Doughboy, so I was really into claymation and stop motion. I won all kinds of awards at student film festivals and had a great time doing it, so that was the direction I was going,” he recalls. “When you’re young, your career counselor isn’t asking, ‘Would you like to be an artist?’ It just wasn’t put out there. So if I was going to be an artist, I guess my ‘career’ would be graphic artist.”

While Guerin had dropped out of school to pursue his dream of being an Olympic cyclist, he eventually ended up going to commercial art school when he was 17. Shortly after, he got his first job at Screamer Magazine, based on the Sunset Strip, and Guerin moved from his hometown in the San Fernando Valley to Hollywood. When computers became the main tool for graphic designers, Guerin again had to switch gears into something more fulfilling and lucrative.

“My mother, father, brother, grandmother are all in the interior design business. My dad suggested I go into decorative painting, so I did. That eventually put me into the movie business, commercials, music videos and celebrity homes. Then I started doing commissioned paintings for people like Tommy Lee and Slash, and I’ve been doing commissioned pieces for the last 20 years.”

Most design firms have at least one vision board dotting desks in their offices, but Guerin’s is actually an entire wall covered in press clippings and photos of past art pieces he has done for clients such as Halle Berry, Tommy Lee, Britney Spears, Nikki Sixx, Paul Stanley and Slash. His design work can also be seen at L.A. hot spots like Palmilla, Katana, Javier’s Cantina, Estrella, the Roxbury and Red O as well as on various E!, MTV and HGTV shows.

After I stare at this wall for a few minutes, Guerin leads me back to the lobby where one of his gorgeous Ganesh paintings is propped up on the couch.

“Back around 1995 I did these Ganesh pieces for Brent Bolthouse’s Opium Den, which had this whole Eastern vibe. I started doing these Ganeshes around town because it was a fun thing to wheatpaste and stencil them all over, and then everyone loved them, had a great response to them,” he says. “I’ve had Aerosmith hire me to put them on their road boxes, and a friend in the TV/film business had me put them on his equipment boxes, too.”

We move into a hallway where two more Ganesh pieces hang. 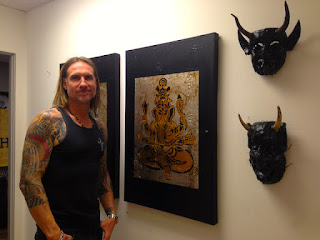 “Then I started doing things with tar. These are all tar, silver leaf and gold leaf – no paint’s involved. I live in Malibu and with all the things happening with the environment and the beach, and then tar is also natural element from the earth. You have tar, and you think about the dinosaurs and mammoths. It’s a natural resource that now fuels our entire world,” he explains. “I’ve done these masks in tar and worked with different kinds of tar for 25 years. It all goes back to when movie studios would use tar in nicotine wash on set walls to age them and make them look old.”

Guerin moves on to two pieces that are in his show happening Feb. 24 from 7 p.m. to 10 p.m. at Lab Art: a customized makeup chair finished using live metal and upholstered with real Louis Vuitton leather, and a bicycle that he welded and customized with the same Louis Vuitton material.

“The name of the show is Gold Digger since I’ve been working with gold and silver leaf and have been doing this fun Louis Vuitton thing. I use all this couture stuff (Hermès, Chanel, Yves Saint Laurent) and other brands like Aston Martin (who are sponsoring the show) and Coca-Cola,” he tells. “I’m taking ‘Men at Work’ traffic signs, turn turn the man into a woman, affix gold foil to the end of her shovel, and now she’s a gold digger. I did one in Beverly Hills and am going to put one up on PCH in Santa Monica near the California Incline construction.” 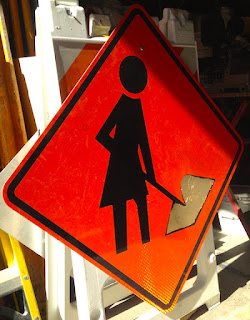 In addition, Guerin is turning a female mannequin into a well-dressed construction worker – complete with a copper Hermès helmet – holding a shovel with its handle wrapped in the Louis Vuitton leather for an installation to be placed in front of a luxury boutique in the city alongside some faux broken-up concrete with gold and fake jewels in the center and a pile of dirt next to it. If she doesn’t get stolen, you’ll be able to see her at the Gold Digger show next week.

Once I walk into Guerin’s studio area, I see more of his paintings that are part of the exhibit before he shows off two huge Snap-on tool chests that he has completely transformed.

“Snap-on is like the Rolls-Royce of tool boxes, so I wrapped one in Louis Vuitton and put an ebony top on it. I did one for Slash and Steven Tyler, and this one will be in the show with another one all wrapped in real python. The handles are chrome femur bones,” he describes.

A painting of the Little Green Guy that Guerin is using in some of his street art pieces catches my eye, and Guerin shares that he’s testing out a process to patina the copper he has painted onto the canvas of the piece. He also offers some background on the little figure.

“That’s a new one that I’ve been playing with. It reminds me of my childhood. My grandma used to live in Venice, right where the Venice Pier is, and I remember being in fourth grade and finding these Little Green Guy stickers in a surf shop. I thought they were so cool,” he smiles. “They really remind me of West Coast, lowbrow culture.”

At this point in his career, what it all comes down to for Guerin is eliciting some kind of response from those who see his art. Whether it’s inside a chic Hollywood restaurant, on a cement wall in a Downtown alley or hanging in Lab Art during his Gold Digger show, it’s about what the art represents to the viewer.

“I’ve worked really hard to get where I’m at as an artist. I want to show my art, and if I can sell it, god bless me and the person that buys it. That’s the cherry on top. If I can put my stuff on display, people come to see it and I get a good response, I’m happy.”