“Growing up in the South people didn’t throw out names like the Viper Room or the Roxy, so when I came here I wondered, ‘Are they really a thing?’ Then I played them and realized, ‘Wow, look at who has played here before.’ I got it,” admits New Orleans transplant Rilan Roppolo. “I’m obsessed with the new season of ‘American Horror Story,’ and there was a flashback of Lady Gaga’s character in 1984 saying, ‘Let’s put on some makeup and go to the Roxy,’ and I was like, ‘The Roxy!’ People understand what it is, and now that I’ve done it, I can say that I’ve really played my hometown. L.A. is where I launched my career, so it is my hometown.”

To say that the 20-year-old singer-songwriter, dancer and actor is on the rise would be no exaggeration. Rilan has not only played venues like the Sayers Club, Viper Room and Roxy, he just released his debut EP, Chemicals, produced by Dallas Austin who has worked with everyone from Lady Gaga and Pink to Grace Jones and Madonna.

“A co-writer on all of my stuff, Naz Tokio, was Dallas’ writing partner for several years, so she would talk about him, thought we would work well together and he came to two of my shows in 2013. I did a cover of David Bowie’s ‘Starman,’ and Dallas loved it,” Rilan remembers. “Three days later, we went into the studio and did our first song, ‘Abandon My Angels’ (the first track on the EP), and to be honest, it was magical. That sounds cheesy and cliché, but it’s true. Like Michael Jackson and Quincy Jones, who just clicked and ended up developing a sound together. Not that I’m anything like them, forgive me for using that as a reference! [Dallas and I] just made sense. The best part about it was he just completely understood what I wanted. The fact that someone of his caliber and success responded to what I naturally do is encouraging.”

Ever since childhood, Rilan has been a natural performer. He began acting and singing in musical theater at age 6. Though his dad played in a garage band in high school, his family isn’t particularly musical. However, it was the music that Rilan’s mom had playing in her walkman that ended up being his biggest influence.

“I grew up with my mom’s walkman as opposed to a CD player or iPod. On it was Madonna, David Bowie – that’s who I listened to. I was a decade or two behind, but I thought it was cool. I would walk around and pretend I could dance. The coffee table was my stage,” he laughs, before explaining how watching performances from the two artists was a catalyst for him deciding to pursue a career in music. “It was a combination of Madonna and David Bowie, seeing people who were so unapologetically themselves on stage where they could be free and exploit everything that was taboo: Bowie with his androgyny and Madonna with ‘I have sex all the time.’ They were people who took a risk, and it paid off; that really resonated with me.”

The city of New Orleans also had an impact on Rilan’s musical development.

“New Orleans is a metropolitan city, so we got big acts all the time; I saw Lady Gaga twice. House of Blues had their smaller Foundation Room where they brought a lot of indie artists, so that’s where I would go a lot. I saw Lights there, and I loved her,” he gushes. “If you walk around the French Quarter or Downtown, there are people tap dancing and playing music all the time. It’s totally different than what I do – jazz, blues and a fusion of African-influenced music – but it was really cool to be surrounded by different styles. Being surrounded by people’s different inspirations is inspiring. That creative energy is a positive atmosphere that makes everything better.”

Rilan shows off all the different sides of himself as an artist in a five-part video series to promote Chemicals entitled "iAm." Every video represents a different word that begins with each letter of his name: Rebel, Idealist, Lover, Alchemist, Necromancer.

You can tell from the clips that fashion is a big part of Rilan’s persona, so we meet each other on Melrose Avenue to do some shopping at one of his favorite clothing stores, Flasher.

“I’m now friends with the owner of Flasher because I think I pay their rent with all of the stuff that I buy,” he jokes. 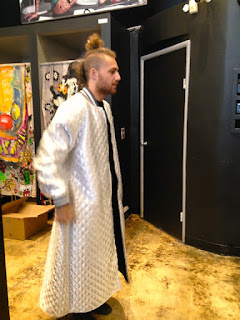 Scott, the shop’s Creative Director and Manager, greets us warmly at the door and immediately has several items to show Rilan. Flasher is full of cutting-edge streetwear and outfits that are perfect for a red-carpet event or concert performance from designers like L.A.-based David Giampiccolo, a contestant on the latest season of “Project Runway.” Rilan tries on one of Giampiccolo’s pieces, a long quilted puffy coat in white.

“I went to a private prep school from Pre-K all the way to 12th grade. In elementary school we had a uniform, in middle school we could wear what we wanted but under certain guidelines that seemed to suit the preppy kids’ style so much it made me rebel. I discovered Hot Topic and was a total emo kid. I would straighten my hair, wear eyeliner,” he recalls. “I didn’t understand why everyone wanted to fit in a mold and look like everybody else, that’s so boring. I found ways to make that collared school shirt interesting! It was not easy, but it developed into the crazy stuff I like now.”

Some of the clothes at Flasher are indeed outlandish, but promote the idea of fashion as wearable art. There are also several bold art pieces that adorn the boutique’s walls, which makes the shop fit right in with the overall vibe of Melrose Avenue.

“I live about five minutes away, and Melrose is where I hang out. It has all these little boutiques that you don’t find everywhere. Each store has its own personality,” Rilan tells. “Melrose looks like what the ‘80s would have been to me with album posters at the corner all overlaid on top of each other. I feel like I’m where I always wanted to be, surrounded by creativity.”

Rilan has always been in touch with his own creative side.

“I took piano lessons when I was 8, but I hated it and only lasted two years. When I was 13 I played around on a keyboard we had at home and ended up loving it. I taught myself chords, scales and attempted to write. I was 15 when I went into the studio for the first time and recorded some terrible songs,” he laughs. “I sounded like I was singing musical theater because that’s all I knew how to sing. It was definitely a process, but I thoroughly enjoyed it. I tried to look at who I admired and emulate without copying. That’s where I developed this whole ‘80s synth-pop dark sound.” 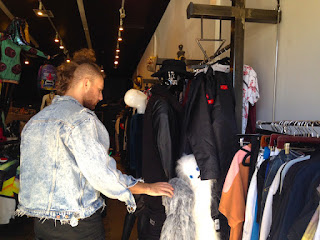 Around the time that he found his way back to piano and writing songs, Rilan discovered what would be his other great passion in life.

“As I progressed into community theater from school theater, I was surrounded by classically trained dancers. One of my friends was in musical theater dance class and asked me to come because they needed more boys. I went and thought it was amazing. I started with jazz and broadway, then tap, ballet, contemporary and hip hop,” he says. “I found dance later than most, but it became the most important part of my life. You don’t have to speak a language to understand what someone is trying to say, dance is so universal.”

Eventually, Rilan attended a convention where choreographers from the commercial music industry taught workshops, and he discovered that he could take his theatrical background and apply it to a career in commercial pop music. He enrolled in a songwriting program at Belmont University in Nashville, Tenn., but after half a semester he decided to take up an offer from a dance agency and make the move to Los Angeles.

His musical theater training was definitely key in nabbing a role as a Dalton Academy Warbler in the final season of “Glee.”

“‘Glee’ was a funny thing because that was the fourth time I auditioned for the job. While I was in high school, I had a theatrical agent and tried out for roles three times, but it never happened. Then I ended up going to audition as a dancer, but my agency sent me on the wrong audition. Instead of the dance call, they sent me on the acting audition. I showed up ready to dance and move, and everyone else was in suits with their hair all slicked back. I thought,’This is the worst audition yet! It’s not going to happen,’ but I ended up booking it. It was cool to do something so all-encompassing of what I do. Plus everything Ryan Murphy does – that whole world of ‘Nip/Tuck,’ ‘American Horror Story,’ ‘Glee’ – is all uber-stylized, and I find it inspiring because it fits a niche in pop culture. You see an image and know that’s ‘Scream Queens’ or that’s ‘American Horror Story’ because it’s so specific with the styling and the themes. I would love to do anything that involves music and dance in something like ‘American Horror Story’ with a dark aesthetic. Mixing media is how you impact culture, say what you need to say in a way that people actually listen because it’s in a creative outlet.” 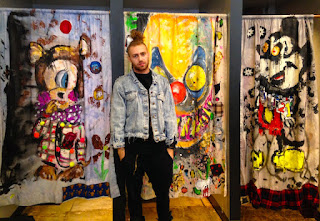 Before we part ways, Rilan tells me about his recent trip to do three shows in London and falling in love with the city, specifically Camden Town. Punk rock and alternative culture thrive in the neighborhood where the Sex Pistols and Vivienne Westwood once haunted the streets.

“There are people there who are still completely goth, mohawks, guys with eyeliner and very specific, stylized stores – a Lolita store, a new rock store with new rock boots. It’s almost like Melrose,” he concludes. “Home is always home. When you go back, it’s the familiarity that makes you feel comfortable. When I go back to New Orleans it feels familiar, but Los Angeles is definitely home because of the memories I’ve made. There are certain scenes that people fall into, but I haven’t found one that I fit into. I think that’s why like it better, I can just do me.”

Posted by Jigsaw Magazine at 8:58 AM