At the L.A. River

Mike Andrews' enthusiasm is infectious as he spots one of the large grey birds during our walk along the Los Angeles River. From the moment we met at our predetermined starting point of Proof Bakery on Glendale Boulevard and over the course of our 10-minute trek to the riverbed, the musician/film score composer's lust for life – his love for where he's from, where he is now and where he's going – is evident. He bursts with stories about the city. He doesn't just tell me the name of one of his son's favorite dishes at a local restaurant (the potato balls at Porto's). He tells me about the establishment's owner, her life and how the restaurant came to be. Maybe it's because he's a California boy through and through, but I think he's also just innately inquisitive about his surroundings.

"I've been jumping all around California since I was a teenager. I grew up in San Diego, then went to college at Berkeley. I started making records after school, so I was in L.A. and in San Diego for a little bit, then back to San Francisco," he says. "I came back to San Diego, lived down by the beach and toured a lot. Then I started working with movies, moved to Los Angeles and started Donnie Darko."

Mike (under the name Elgin Park) played guitar with a funk and jazz band in San Diego, the Greyboy Allstars, who were asked to score director Jake Kasdan's feature debut, Zero Effect, in 1998. The next year, Mike began another professional relationship that would prove to be as long-standing as his with Kasdan, when he worked on the music for "Freaks and Geeks" for executive producer Judd Apatow. But the project that really brought Mike to international prominence was his score for Donnie Darko, especially his cover of Tears for Fears' "Mad World" with his childhood friend Gary Jules on vocals. By this time Mike was settling into life as an Angeleno.

"I lived in Downtown, at the Molino Street Lofts in the '90s, but I just felt locked in concrete. I grew up on the beach, so I couldn't take it. Then I moved to Glendale, and I felt like I was in some city that wasn't in California," he laughs. "I like that Glendale is away from the scene. I've always had an aversion to living around people that were just like me. I lived in Hollywood for a while, and I felt like I was 'in the biz.' You find yourself in any city finding those three or four things to do and just circle around them. Occasionally I branch out, but it's just nice to make a bigger place feel small. Finding that little triangle of where to eat lunch, get coffee, take a walk – all those places were inhabited by writer/director/actors [in Hollywood], and to me, it just felt weird."

In seeking those neighborhood spots around him, Mike discovered his haven of the L.A. River walk.

"This trail is so mellow. It's so peaceful, but the highway is right there. I guess it just sort of tunes out because it's like white noise," he says. "I come here once a week at least, sometimes more." 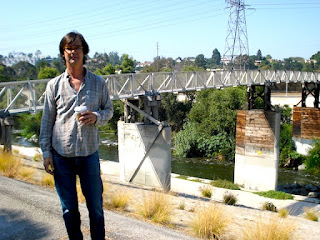 Most of the restaurants Mike likes to eat at are on the east side as well.

"We just found a great restaurant in Pasadena called Ración. It's a tapas place and is really good. La Cabanita is awesome, an old-school Mexican family restaurant. It's delicious and family oriented. We have our little guy, and he likes to make noise and spill stuff," he says with a laugh. "We go get pho a lot at Glendale Pho Co. and Viet. We like to go Downtown, too. We just went to the Flying Pig Cafe, another tapas-y joint. It seems like everybody's doing that: the little plate where you both have a bite, and it's over [laughs]. It just seems like those are the people who are caring about what they're making. Anywhere it feels like 'I'm going to make some real food out of some real stuff and be particular about it' is good."

After the success of Donnie Darko, Mike continued to put the same focus he does on finding quality food on picking projects like Miranda July's Me and You and Everyone We Know, the Duplass brothers' Cyrus and Jeff Who Lives at Home, Bridesmaids and the theme for "New Girl." He worked again with both Kasdan (Orange County, The TV Set, Walk Hard: The Dewey Cox Story and Bad Teacher) and Apatow (Funny People, The Five-Year Engagement). When signing on to a film, Mike looks for a certain something in those he collaborates with.

"It's just a type of person: People who have a strong sense of self, who like to look at their work relatively independent of other people and aren't afraid to be non-referential," he says. "I love working with new filmmakers, first-time directors, too, because they don't have a rule book. As you develop your art, people tend to be like, 'oh, this is the way we do it; we don't do this or that.' When you start working in that world, then it's limiting. I'm just working from intuition, if the intuition is already boxed in by someone's preconception of what it's not supposed to be, it limits me in my ability to be inspired."

Even after all these years of scoring for film and television, each job comes with its own set of hurdles to overcome. Mike admits that his latest project, The Reluctant Fundamentalist (set for release in 2013), with acclaimed director Mira Nair was one of his most challenging.

"She's a very strong woman and very much like I am, in that, she is wildly both distracted and focused in her art. She's a perfectionist, constantly trying to make things better even if it's outside the realm of possibility – which I think is great because you have to do that in order to get better," he says. "Of course collaborating with someone who's in India editing is very difficult. They're twelve-and-a-half hours ahead. I would call her at the end of the day when I was fried, and  it was the beginning of her day so she was either in yoga or starting her day with a flood of ideas. Or it was my morning and I was trying to get a real dialogue with her after she worked 14-16 hours editing and dealing with all these issues. And it was an independent movie, so there wasn't a ton of money. Everybody takes a hit on an independent movie. You just deal with it for the sake of having more freedom."

Having the freedom to not only pick his film scoring projects but work on his own personal music is something that Mike relishes. Aside from producing albums for other artists like Brendan Benson, Metric and Inara George, Mike released his solo debut, Hand on String, in 2006. He releases his sophomore solo effort, Spilling a Rainbow, next week (Aug. 14). 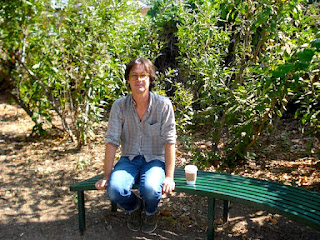 "My personal records are mostly for me and people I care about. They're so personal to me; maybe someone else would relate to them in a personal way. They're cathartic, and it's fun to do just whatever I want because I don't spend a lot of time doing whatever I want," he laughs. "I really love my work. I love making movie stuff. I'm very fortunate to be able to do that, it's just a different kind of work. It's like being an architect. You create something that represents you, but it's in the context of someone else's needs and designs – trying to fit my sensibility in a collaborative form within the context of someone else's art/entertainment."

Spilling a Rainbow documents Mike's transformation as he became a parent. From finding out his wife was pregnant while at the dentist ("Dentist") and scoring one of their prenatal ultrasounds ("Music For Cell Division") to those first days of being a dad ("Waiting for You to Wake), he shares it all on the album.

"I waited a long time to have kids. Being an artist is very me-oriented, and finally having someone come into your life – besides, obviously a relationship – that doesn't even allow you to think of yourself is just such a relief," he says with a laugh.

One song that illustrates the joy he's found in fatherhood is about blowing bubbles, "Bubbles in Space." The video for the track, directed by his longtime friend Josh Hassin, is animated by a collection of drawings from art students.

"My friend Jeremy [Farson] teaches at the High Tech High International, which is a school in San Diego that focuses on science and art. I told Josh that I didn't really want to be in the video, so he came up with the idea to do an animated video, and it ended up that Jeremy's class would do the drawing," Mike shares. "Josh shot me for three hours one morning, along with all of our children at the beach. He edited that together, gave it to Jeremy's class and they drew everything. I was really pleased with it, that kids got to make something and it was a labor of love like my record. It was good times amongst friends making something cool."

Mike brings the same philosophy to organizing his August residency at Bootleg Bar.

"I'm going to have a couple collaborations with a few people, it's always different. I just have people come to my house, and we work on some songs. Either we interpret some of their songs or we do a cover that we're both interested in." He adds, "I'm going to try and do some kind of screening because they have a screen in the other room. Maybe score some stuff live or show some images and put some of my music that no one's ever head before in it. Just have fun with the night, make it a place where all the people I used to hang out with can get together because I don't get to go out very often. It's an opportunity to go out and be social and play music."

As for the future, Mike is forever open to whatever comes his way.

"I try not to tell myself, 'this is what's going to happen' or 'I'm really going to go after this thing' because I always feel like anything you really go after, it just sets you up for disappointment. I have always said, 'I'll keep playing, writing songs and just see where it leads me. And if worse comes to worse and I need to make a living, I'll just get a job,' and that was pretty much the extent of it," he says. "It seems like anytime you try to focus on a target, it's like you're missing all the other things that could happen. Stuff just comes at me and I deal with it whether it be a song, a movie, a person. It makes it easier I think, doesn't it? [laughs] Maybe it's the course of least resistance, but it's proved to be pretty good. The only thing is dealing with the psychology of not knowing ever what's in the future, which I've gotten used to over the last twenty-five years that I've been making records and music."

Posted by Jigsaw Magazine at 9:22 AM