Even though I'm half Japanese, I'm not the biggest sushi lover. However, my boyfriend is obsessed, and over the years I've developed an appreciation for quality fish and knife work. We've tried almost every sushi restaurant in Little Tokyo, and the best, by far, is Mako Sushi. Serving the freshest of superior cuts with unparalleled service in an authentic atmosphere, it's no wonder that Chef Mako has been in business for almost 22 years.

Located on the third level of the Weller Court shopping center (also home to Orochon Ramen and Curry House), the restaurant's manager and Mako-san's wife, Mayumi, is often the first person who greets you at the door. Dressed in kimono, as all the waitresses are at Mako, Mayumi leads her staff by example. She is one of the sweetest and most courteous ladies, who is quick to answer questions about the menu and attentive if you have a problem. It's almost like visiting family when we walk into the restaurant, with the customary yells of welcome "Irasshaimase!" and doll-like waitresses grinning as they recognize us.

As soon as you order, a small salad of cucumber, seaweed and sesame seeds is placed in front of you. My boyfriend always orders the same thing, the Fiji omakase: chef's special choice of sushi with two cold dishes and two hot dishes ($68). There are two other omakase options with less food – Sakura ($58) and Ume ($48) – as well as group omakase choices for 2-5 people. 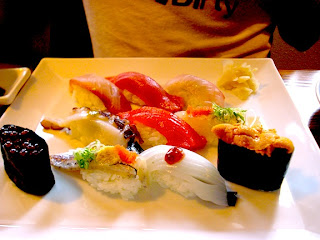 One cold dish they usually serve with the omakase consists of yamakake (sticky mountain yam) with okra, chunks of tuna, seaweed, wasabi and a quail egg. Another is a jellyfish salad, which I have never seen anywhere else.

Some of the hot dishes that come with the omakase are Chawan Mushi (steamed egg custard with shrimp, dish, scallop and mushrooms), a grilled miso-marinated Black Cod Saiko-Yaki and my absolute favorite item on the menu: the Scallop BBQ. You're given a sizzling small stone hibachi piled with huge Hokkaido scallops, green beans and enoki and matsutake mushrooms. Just make sure to remove the scallops from the hibachi before they become overdone.


I usually get the Scallop BBQ entree and a bowl of rice because it's the perfect vehicle for Mako's homemade soy sauce, which is so delicious I could almost eat it by the spoonful on its own. I've also tried the Prix Fixe meal that comes with seven pieces of sushi with an order of Shrimp Tempura for $35. The shrimp are huge – so plump and juicy.

But the main attraction, of course, is the sushi. What's special about Mako is their huge cuts of fish – do you see how big that piece of toro is in that photo at the top?! The fatty tuna is so silky and divine. The rice is served slightly warm, just as it should be, and provides a perfect bed for succulent pieces of halibut, yellowtail and uni. I love the salmon sushi, with a tiny bit of yuzu on top. The salmon roe sushi is fun to eat, as each egg bursts with a tiny explosion of sea flavor in your mouth.