RICH JACQUES of RIGHT THE STARS


At first glance, Solar de Cahuenga seems like your average café. Many of the tables are filled with people sipping on coffee, typing on laptops, reading a book or engaging in conversation. But there's a palpable energy to the place, an electric current that Right the Stars frontman Rich Jacques feels is distinct to this neighborhood in Hollywood.

"It's just this area, there's something creative in the air where you're always in that mindset of 'I'm making stuff.' It's pretty cool," he says. "It's very different when you're in a community that doesn't really understand artists or support them. Here, you really get the sense that you have complete permission to just do whatever comes to mind. You feel creatively open. I think that's why it attracts so many artists. I don't know if there are too many other places where I could actually live and work that really feel like that."

Rich usually stops at Solar de Cahuenga for a cup of coffee since it's conveniently near his home studio, and other studios he uses are just down the street. Besides coffee and tea, Solar de Cahuenga has an incredibly refreshing mint lemonade and a full menu that includes their specialty, crêpes. Rich loves Europe, so a lot of the L.A. restaurants he frequents have a European vibe.

"One of my fallback places is Figaro over in Los Feliz. I love going there and sitting outside or meeting friends, and the food's good. Little Dom's is great too," he shares. "I love great restaurants, and I was thinking that maybe next year I'll try to never repeat going to the same place twice just because there's so many amazing places, to force myself to explore and go someplace different. I just discovered the Eveleigh on the Sunset Strip towards Beverly Hills. I love the decor, the vibe of it."

Whenever he has a day off, he'll go hang out at the Getty Center.

"It is one of my favorite places. I love architecture, and that building, it's a miracle that it exists right? The lawn there is so peaceful."

Rich also enjoys taking in concerts at the Hollywood Bowl.

"Anything at the Bowl is fantastic. I've seen Sting and Sarah McLachlan with the symphony. I saw Coldplay there when they were first breaking in 2003. That was really special. I saw Radiohead there, and I just saw Glen Campbell. He was pretty impressive," he says. "When I go to a show, I like feeling joy. One of my favorite shows was seeing Phoenix at the Bowl. Everybody was just excited to be there and having a great time. You could feel it, the vibrations in the air. It made you feel good. When everybody in the crowd is on board and lifting each other up, I love that. After seeing that, I was like, 'OK, that's what I would like to create,' that kind of environment where it just feels good to be there." 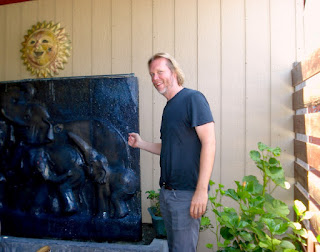 Dining on the Sunset Strip, lounging at one of the city's architectural marvels and seeing shows at the world-famous Bowl are a far cry from Rich's rural upbringing in Wisconsin and even from the bigger midwestern city of his adolescence. Steubenville, Ohio is where Rich spent hours practicing guitar and began cultivating his musical taste.

"I would mow people's lawns in the summer, and I would have my Walkman on playing stuff like the Police. Anytime they came on, I thought, 'That's the greatest thing ever.' I listened to all the New Wave bands, like the Fixx. I also loved Prince, Duran Duran – all that stuff was like magic to me," he says. "A friend of mine who was a drummer, we would go to shows together when we were 15. We saw 38 Special, Kool & the Gang and Night Ranger – whatever was out there. I was always intrigued by the whole scene and setting."

While in college, Rich was a founding member and guitarist of the popular, Pittsburgh-based Brownie Mary. But by 2000, he moved to Los Angeles and began to work with other musicians.

"When I first moved here, I did a tour playing guitar for Chantal Kreviazuk. We did all of the House of Blues in the United States opening for Jason Mraz," he says. "I love those venues, they're so well run, and the sound and lights are set exactly in the way you want to be presented. It was really fun."

"I did a lot of private lessons. I taught Ben Affleck and Don Was' kids," he shares. "It's a great way to meet some amazing people. Moving out of Pittsburgh it opens your eyes to, 'Oh wow, the possibilities are endless.' I really enjoyed it for a while."

Then in 2009, he formed Right the Stars (The name was inspired by Wilco's "Jesus, Etc."). With Rich on vocals/guitar, BC Taylor on drums, Alex Balderston on bass and Asaf Rodeh on guitars/keys, Right the Stars released their self-titled debut in 2010 and have just put forth a sophomore effort, Hello Yes OK. Their songs were quickly picked up for films (The Break-Up, Couples Retreat), TV shows ("Pretty Little Liars," "Grey's Anatomy") and video game ads ("Kinect Rush: A Disney Pixar Adventure").

"If I could write songs as a score, like Alexi Murdoch wrote songs specifically for the movie Away We Go, that would be a dream," says Rich. "If I see something visual and feel something from it – it's a great way to write. It gives you a focus: What does this feel like? I want to make the sound so it feels like this."

He says, "I wanted this current record to feel good for no other reason than just for the sake of feeling good."

Posted by Jigsaw Magazine at 8:58 AM