Margaret Cho is an addict. But it really isn't her fault. Los Angeles is littered with outlets catering to her dependency; some are even open 24 hours. I have friends who are addicted to the substance, and I am even guilty of sitting by while she fed her habit from a steaming hot bowl. That's right, comedian, actress, author, singer-songwriter and social rights activist Margaret Cho is totally hooked on pho.

"I've been kind of obsessed with pho for a while," she admits as she places her order at one of her neighborhood pho establishments, Pho 22.

The restaurant serves standard Vietnamese fare (noodle bowls, summer rolls, fried rice), but is definitely better decorated than most pho cafés. When Margaret's bowl arrives less than 10 minutes after ordering, she remarks on the quickness: "That's what I like about pho. And that you can personalize it. I use almost a whole bottle of Sriracha!"

Who knew that a bowl of noodles would serve as an apt metaphor for Margaret's life? Since winning a comedy contest to open for Jerry Seinfeld and moving to Los Angeles around twenty years ago, Margaret has blazed her own unique career trail that's been full of bumps in the road – yet, she has maintained the same fiery passion every step of the way. Whether it's performing stand-up, acting, singing or writing, she throws herself into each project with gusto. She has starred in numerous one-woman shows that have spawned concert films, best-selling books and Grammy-nominated albums. She is about to embark on an international tour for her new stand-up show, "Mother."

"My mother has been a popular thing in my act for so long. I wanted to do something that was all about her and about being an immigrant," she says. "Also, I want to be a mother at some point. I'm 43, and it's harder as you get older. Motherhood is an idea of what you're supposed to do when you're a woman, what you're supposed to be. The show is a chance for me to put a lot of material about my mother together in one place, and it's about what are you if you don't have any children – are you a mother of the world?"

This concept is something that Margaret has really taken to heart. She is constantly at the forefront of social discourse pertaining to the rights of women, Asians and the LGBT community. Her humanitarian efforts have been honored by organizations like GLAAD, the AALDEF and American Women in Radio and Television. She uses her comedy to encourage debate, inspire change and, of course, to just make people feel good.

"The best thing is to go to a comedy show and just really laugh. It's so rewarding to make people laugh. I want to feel like I've done something good for the world or affected people in a positive way," she says.

As Margaret digs into her bowl of pho, we talk about her childhood memories of her mother cooking at their home in San Francisco.

"It made our house stink because she was always fermenting things in clay pots. I was really ashamed of it growing up because every time white kids would come over they'd be like, 'What's that smell? It smells!' It was so embarrassing. But as an adult, I don't have any of those skills and I wish I learned more about it when she cooked stuff like that. That's sad, to not be able to cook like she did," she confesses.

Although she can't prepare dried squid like her mom, Margaret likes good food. She is the host of a new Food Network show, "Blind Dinner Party," launching this fall.

"I'm not a great chef, but I like to eat. But I did make some stuff for this show. I made pigs in a blanket, which is really simple but fun to make," she shares. "I like the show a lot. It's a great idea to bring strangers together to eat dinner and have to talk about themselves. Often, even if they have really different cultural views, they come together because they're eating. People are nicer to each other despite their ideology. It's really interesting."

If she was to plan her own "Blind Dinner Party," whom would she invite?

"I would love to invite M.F.K. Fisher. She was a great food author from the 1940s. James Beard, he would be a good one too. Julia Child was tight with them, so she would be a great addition," she says. "Anybody who is really interested in food is fun."

Aside from preparing for the premiere of "Blind Dinner Party" and the start of the "Mother" tour, Margaret just received news that she is nominated for an Outstanding Guest Actress in a Comedy Series Emmy for her portrayal of Kim Jong Il on "30 Rock" (Click here for a video clip.) She also continues her role as Teri Lee in the fourth season of the hit Lifetime show "Drop Dead Diva," which films in Georgia. All the touring and months of filming away from Los Angeles conjure up one craving for her.

"Pho! My favorite place to get pho is in Chinatown. It used to be called Pho 79, and now it's Pho 97.  I also like Ocean Seafood for dim sum in Chinatown. I think Chinatown is great, they have really good food there," she says. "If I get a chance to go out at night I go to Largo, a really great music and comedy venue. If I go to dinner around here, I like Carousel. The food is amazing, and they have belly dancing shows on the weekend. I was a belly dancer for years. I studied in Cairo and danced in restaurants here. I love it, but it's not something that I have time to do anymore." 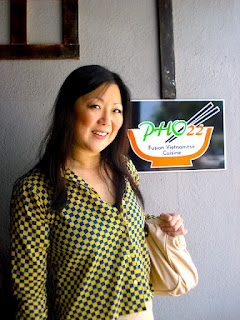 The world got to see some of Margaret's dancing prowess when she competed on Season 11 of "Dancing with the Stars." Another of her passions is music.

"My father and mother were both musicians and were really active in the church, so they were in the choir. My mother has a really great singing voice, so I got that from her. I did a lot of piano for years. I play guitar now," she says.

In 2010, she released a musical comedy album, Cho Dependent, featuring collaborations with Fiona Apple, Andrew Bird, Tegan & Sara and more. Some of her favorite L.A. performances have been music-related ones.

"I liked doing the Greek Theatre for the True Colors Tour with Cyndi Lauper and Debbie Harry. That was really phenomenal," she says. "I also loved playing the Wiltern and the Walt Disney Concert Hall, where I did a music show with Bob Mould, Dave Grohl, Ryan Adams and all these other folks last November. It was tremendous."

Margaret is also an avid lover of tattoo art. People might be surprised at how many tattoos cover her body, and a lot of the pieces were done by L.A. artists.

"One of my favorites is Craig Jackman. He has a shop called American Electric on Sunset Boulevard that's really good. Memoir Tattoo is amazing. I've been tattooed by every person in the shop. When I have a lot of money, the best is Mister Cartoon who has this whole compound in Downtown. He's really phenomenal. High Voltage Tattoo, which is Kat Von D's studio, is great. I also love Eddy Deutsche who has a private studio here in Los Angeles. He's an actual legend of tattooing. I'm real lucky with the people that I'm able to get work from because they're the best in the world."

Margaret loves Los Angeles for many other reasons besides the tattoo shops.

"It's where everybody comes eventually. If I need Korean food or pho, there are many different immigrant communities, and their food is so good. When I'm out of town I miss my understanding of L.A. – like the weather, the history of cinema and television. I love the way the cities are laid out, the culture," she says. "L.A. has become so special to me because I spend so little time here. Comedians never have a real home, they're always traveling. You almost don't know what to do with yourself when you're home … It's always going to be special for me to be here."

"Drop Dead Diva" airs Sundays at 9 p.m. on Lifetime. Margaret Cho brings the Mother Tour to the Wiltern on Dec. 6. For more information, visit margaretcho.com.
Posted by Jigsaw Magazine at 9:33 AM