“Art has always been around me; it’s something I’ve literally been doing since I was a kid. My mom has photos of me at age 2 creating entire scenes on one of those magnetic drawing boards,” says filmmaker and director Joshua Guillaume. “It’s what eventually led me into directing.”

As evidenced by his choice of venue for our interview, Bourgeois Pig, the New York transplant continues to feel most at ease in arts-friendly atmospheres. The bohemian coffeehouse boasts your standard menu of hot and cold beverages, baked goods, salads and sandwiches but offers a completely unique environment of glass chandeliers, a pool table and a room that resembles the woods at night: black walls, tree branches full of brown and green leaves and a bright orb of light hung in a corner acting as the moon.

“Bourgeois Pig reminds me of one of the coffee shops back in Rochester,” says Josh after ordering a cup of coffee at the counter. “Upstairs it had art covering the walls, and you could hang your art wherever you could find a place to put it. Downstairs it had a really thrown-together vibe like this place. I like places like that, that seem like happy accidents.”

While he may enjoy the unexpected from time to time, it’s no accident that the talented young filmmaker landed in Los Angeles a year ago. Growing up in Upstate New York, his interests blossomed from Magna Doodle drawings to encompass all kinds of art.

“My dad would blast rock music when we rode in the car. I was 11 when I heard ‘Frankenstein’ by the Edgar Winter Group, and the synthesizer was such a unique sound that I had never heard before. I looked at my mom and said, ‘I want to learn synthesizer.’ She said, ’You should learn piano.’ I begrudgingly said, ‘OK, I’ll try it out and ended up playing the piano for over a decade,” Josh tells. “At that age my family also got a new desktop computer. My older brother and I would make crazy drawings with Windows Paint and figured out how to make animations with them. We would set them to music and have competitions of who had the better animation to get mom most interested. For several months we would fight over the computer to make animations.”

Although Josh was beginning to explore other art forms, drawing and painting were still at the forefront.

“A lot of my early influences were European artists like French artist Jean-Léon Gérôme, his work that was during the period when the French were painting in Morocco or around Arabia and showed prayers, different Arabic architecture and large beautiful scenes with a lot of color. I’ve also always loved Degas since some of his work came through where I grew up when I was 10 or 11. That was the first time I saw a great painter’s work in person. It was so exciting. There is a freedom in his drawing that I’ve always loved, which is interesting because he’s somebody that the French Academy would tend to hate because he’s got so much freedom. He has that post-impressionistic flair to his work that the Academy absolutely hated. It’s interesting that my influences are so polar, but it’s great to pick from both and enjoy them for what they are,” he reflects.

Josh continued painting through high school and even hoped to study at an atelier academy in New York City or Philadelphia modeled after the French Academy, but he eventually hit a wall with fine art and realized all of his artistic endeavors were leading him down an entirely different road as a visual storyteller.

“I was halfway through my second year of college, trying to figure out what I wanted to be and had what I can only describe as an epiphany. I realized that anytime I wanted to do a painting, I was always planning to do a series of paintings. There was always a narrative, a sequence of three, 12 or even 20 pieces that I wanted to paint. I would make notes on what I wanted each painting to do, but I would never get around to actually painting them all. With music, it was never just about rocking out, I was always interested in composing songs that had a longer narrative. One day I was sitting in class and realized that all of this is basically what a director does: You have a vision, and you direct to get there. I grew up loving movies, being obsessed with Star Wars, but it was then that I realized, ‘Wow, it’s film. Directing is exactly what I want to do,’” he remembers. “Over the next month, I went full bore reading and looking around at every college possible. I eventually ended up at Syracuse University, but since I hadn’t begun there as a freshman, I couldn’t graduate from the film program. I focused on literature, theater, fine art history – all of which continue to inspire my films – and took just enough film classes to learn what I needed. I was able to recruit graduate students to come DP and work on scripts for me, and I would co-produce their thesis films.”

Once Josh realized his true calling, there wasn’t a hurdle his passion couldn’t overcome. 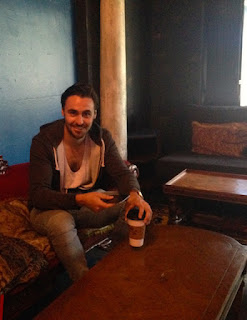 “I found out this one professor had crewed an Israeli film the previous year that was shot in Syracuse, so I walked up to him after class – he was a really private guy who didn’t like to talk about himself – and said, ‘So you crewed a film last year, what’s coming up?’ He was like, ‘How did you find that out?’ ‘Internet, man. Where can I intern? What feature films are coming up?’ He sent me to see a guy working in the cage upstairs. I went up to the cage and met this long-haired South Korean named Q and exchanged information with him. I found out he had experience working in the film industry in South Korea and literally told him, ‘You’re my mentor now. I don’t care if I screw up, you better yell at me, tell me when I’m wrong. Slap me around; I’m just here to learn.”

He has definitely maintained the same drive and determination in Los Angeles.

Transviolet’s video for “Girls Your Age” is an example of Josh’s most recent work, and he just wrapped a new music video for singer-songwriter Conner Stark. Music continues to inspire Josh, and he loves discovering new artists.

“Every time I go to the Echo for a Monday-night residency, I come out with a new favorite band. The first time I went, Holychild played, then the Moth & the Flame,” he gushes. “That’s the one place where I tell friends to go if they’re looking for new music. It’s free, and you’ll find bands who have just been signed or about to be signed that put on fantastic shows.”

While Los Angeles may not have MoMA or the Met, Josh has slowly started to explore the city’s art museums.

“I went to LACMA a few weeks ago to see the Steve McQueen ‘Kanye West: All Day’ video. I really enjoyed it because it seemed like a continuation of McQueen’s earlier video artwork,” he says. “LACMA as a whole has a very nice collection, and the campus is incredible. I haven’t seen a museum campus like it before. The architecture is very interesting. ”

“I love what he has been doing as a director – his framing, the content. He has a voice and a confidence in his politics and what he’s showing that not many directors have,” says Josh, whose taste tends to favor dramas. “Some of the oddity and satire that come from the Coen brothers is always fun, though. There’s a side of me that just loves comedy. ‘Regular Show’ is amazing, and I love ‘Adventure Time,’ how it builds up as if there’s a moral but at the end of the episode there’s really no moral. It’s not so on the nose where it’s like, ‘This is right, or this is wrong.’ It just brings up different questions, which I think is an important part of art.”

Josh admits to being a total East Coaster at heart, but Los Angeles is slowly growing on him.

“The coolest thing I’ve found in Los Angeles that has a little bit of history is near where I live by the Hollywood Bowl: the walk streets like Alta Loma Terrace in the Hollywood Heights hidden in the hills. The sidewalks cut through the hills, and on one that the Bowl backs up against, there are stairs that go from the parking lot at the bottom of the hill all the way to the top. There are houses along the steps and an elevator for the houses that was built in the 1920s or ‘30s [located at 2178 High Tower Drive]. At the top is also where Kurt Cobain lived with Courtney Love, and a great view of Hollywood,” he informs. “So far my favorite thing about Los Angeles, though, is the access to the outdoors and nature because it’s something that you can’t get in cities like New York – being able to go out the desert and ride dirt bikes and ATVs or drive out to Malibu. I would love to live in Santa Monica or Malibu. I love the burn off in the morning. It reminds me of a nice morning fog where I grew up.”

“There are just so many talented people out here, and then there’s the luck factor,” Josh concludes. “But hard work definitely helps give you luck, so I’m hoping I’m lucky.”

Posted by Jigsaw Magazine at 8:29 AM